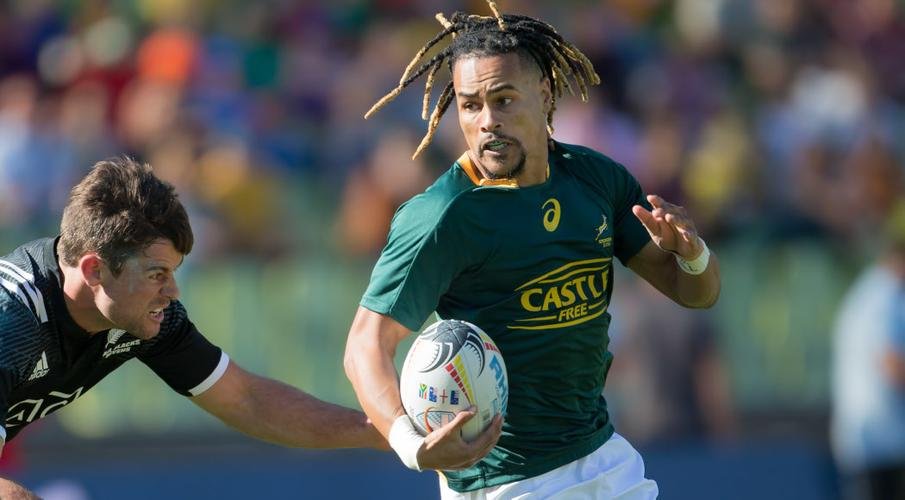 As the 2019/2020 sevens series season came to an abrupt end with World Rugby cancelling the remainder of events, the Springbok duo of Selvyn and Angelo Davids were left at the top of the South African scoring charts.

Selvyn Davids scored 109 points (11 tries and 27 conversions) in 33 matches in the six tournaments and was the only squad member to score more than 100 points in the season.

Angelo Davids finished the season as leading try-scorer despite playing in only four tournaments.

He scored 16 tries in only 21 matches, showing a remarkable strike rate whenever he took the field.

JC Pretorius (13 tries in 27 matches) and Muller du Plessis (11 tries in 19 matches) were the other main threats on the attack, showing the impact of the next generation of Blitzboks had in 2020.
Selvyn Davids said his contributions and his emergence as a senior player in the squad made this season one to remember.

“I suppose one can start to refer to me as a senior player now,” Davids, with 20 tournaments under the belt, reflected.

“Despite that status or not, my attitude on the field will always remain the same when it comes to scoring points. I love scoring tries and kicking conversions and try to embrace every such opportunity with open arms. I was probably just the lucky one to score the most points.

“It does help to have players such as Branco du Preez or Justin Geduld or Cecil Afrika and Rosko Specman around, but I suppose I can now start to do it without them,” he added with a smile.

“In the end, any try is a culmination of teamwork. Angelo and Muller scored the most tries for us on the wing – sometimes they could just walk across the try line – but they did score some pretty impressive efforts as well, with a lot of work left by the time they got the ball.

“For me, that was perhaps a highlight from a team perspective, the way the young guys in the team stepped up and delivered.”

Davids rated the Dubai and Los Angeles tournaments as his favourites (“because we won”) and said his try against Argentina in Sydney was his personal favourite.

Geduld was the other main contributor on the list for points scored, with 83 points in 21 matches consisting of seven tries and 24 conversions.

The experienced Blitzbok playmaker also achieved two significant milestones during the season – he moved past 1000 World Series career points and played in his 50th tournament for the Springbok Sevens in Sydney.

Werner Kok later followed when he took the field in his 50th tournament in Los Angeles, one of the two tournaments won by the Blitzboks.

Geduld and Kok became the seventh and eighth Blitzboks to reach half a century of tournaments, following in the footsteps of Branco du Preez, Chris Dry, Kyle Brown, Frankie Horne, Cecil Afrika and Philip Snyman.

Du Preez also extended his South African career record for World Series tournaments to 75, with Chris Dry moving into the second position on that list after playing in his 74th tournament in Vancouver.

With 53 season points, Du Preez moved into the Top 10 all-time career points list on the World Series – with 1355 points he occupies the ninth spot, with Cecil Afrika in seventh place (1462). Ben Gollings (England, 2652) heads that list.

Du Preez is also second to Afrika on the Blitzboks career points list. He is followed by Seabelo Senatla (1150), Geduld (1034) and Fabian Juries 925.