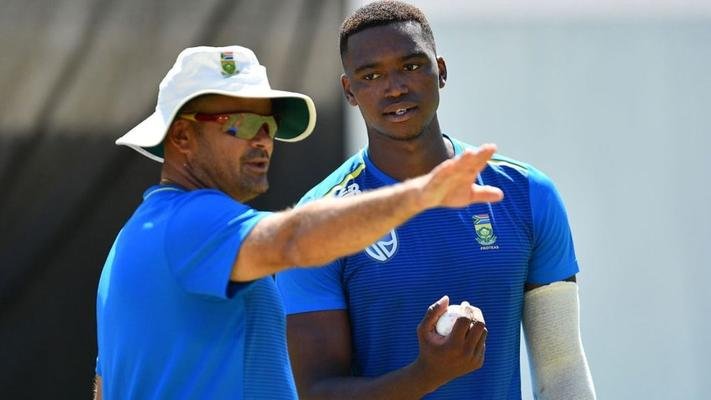 SA bowling coach Charl Langeveldt believes Cricket South Africa (CSA) can be proud of the players which progressed through the domestic structures this past season.

Anrich Nortje and Janneman Malan enjoyed breakthrough performances during a challenging summer in which the national team went through a major transition with a new coaching setup.

Graeme Smith, the recently appointed full-time director of cricket, brought in a new team director in Mark Boucher and a whole new coaching team back in December on the eve of their marquee tour against England.

South Africa went on to lose the Test and T20 Series but drew the One-Day International leg. They then lost a T20 showdown with Australia, before bouncing back emphatically in the ODIs with a series whitewash.

Langeveldt, who was headhunted and brought into the setup from his position as Bangladesh bowling coach, admits it has been a tough induction.

“It’s been an interesting time coming back from Bangladesh,” he stated. “It’s always nice to coach your country. I think when it came to making the deal back then, Jacques Faul (Chief Executive Officer) and Graeme Smith were brilliant behind the scenes making it possible for the transfer to come through to South Africa. The Bangladesh Cricket Board (BCB) were also excellent and they were brilliant in releasing me.

“It was never going to easy. We (the new coaching staff) started with the Test series against England in December and we didn’t have enough time as a team to gel.

“England being England and having a settled team with guys who have played a lot more Test cricket together than us, we had a lot of youngsters coming into the team and into the set-up, that was really hard.

“The guys played well in patches but as a unit, we just couldn’t get it together. We got better in the limited-overs tours. Lungi Ngidi was excellent, Temba (Bavuma) and Quinny (Quinton de Kock) were also good. Against Australia Lungi again with the ball was fantastic and then Janneman was outstanding. Overall we were a lot better.”

Despite opting to rest senior players in the white-ball contests, South Africa still managed to pull their weight and compete, something that former Proteas quick Langeveldt relished.

”I really enjoyed how we competed as a young bowling attack at an international level,” he beamed. “Anrich, Lungi, (Lutho) Sipamla, (Tabraiz) Shamsi, they all stepped up very well.

“All-round everyone chipped in. Where we came from starting in December and where we ended up, I think Cricket South Africa can be really proud of what they did on a domestic level to get these players through. That’s where these players come from and they showed a lot of maturity which is a big plus for us going forward.”

Langeveldt also feels that there is plenty more potential in the domestic cupboard, something the national coaching team were meant to explore during the final weeks of April.

However, with COVID-19 pandemic striking, that has been placed on hold.

“We are looking around for the up and coming fast bowlers,” the coach added. “We were supposed to have a camp starting on April 19 for six days, but that had to be cancelled because of the virus, but we are definitely looking because you always have to have replacements. There have been a few names that have popped up, Lifa Ntanzi, Gerald Coetzee, there’s Glenton Stuurman, Stefan Tait and then obviously Lutho Sipamla, whose been brilliant in the national set-up.

“So there’s a few out there and these are the guys that will be the back-up for the national team and they are the ones we want to see.”