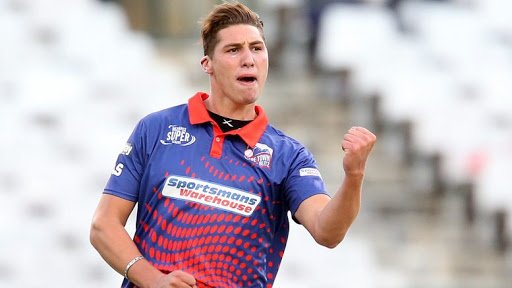 Cape Cobras left-arm fast bowler Nandre Burger is relishing the opportunity of leading a young bowling attack when action eventually gets underway in the 2020/2021 season.

Burger, who joined the Cobras at the beginning of last season, enjoyed an encouraging start to his career at Newlands but lamented not being able to deliver match-winning performances when given the opportunity.

“In my mind I took a massive risk moving to Cape Town, almost giving up everything I had in Johannesburg,” the 24-year-old said.

“My high for the season was, making my debut against my old team (Lions). For me, another high was getting to represent the Cobras and becoming a part of the culture. My low obviously would be that we didn’t perform too well last season. I am disappointed that I couldn’t provide or perform in match-winning performances more often, I feel that I had a below-standard goal-setting season.”

He did, however, enjoy being part of Ashwell Prince’s set up and is looking forward to what lies ahead for the Western Cape franchise.

“I really enjoyed the intensity and the pressure that gets put on us at practice and match time,” he said.

“We have a lot of new faces who have come in and obviously Tshepo (Moreki) has come back. We always speak about us being a young squad, four of our over 30’s, our experienced players, have either retired or moved on and I think the squad is now really young and we can officially say we have an ‘inexperienced’ squad, which is really exciting. Very few of us have played a full franchise season, being involved in every game, so going forward I am really excited to see what everyone can do,” he added.

“I think eight out of the 11 players who are stepping out onto the field are playing with nothing to lose; playing with absolute freedom, which I think is really exciting. Everyone can expect freedom and a fully youth-exuberant style of play from us, I think everyone will go out and play without fear.”

The nationwide lockdown due to the COVID-19 pandemic brought a premature end to the season and has forced the players to find creative ways to keep their fitness levels up in the longer-than-expected off-season.

“Sherman (Baatjes, Cobras strength and conditioning coach) has given us a program to do, obviously it’s a bit difficult because I don’t have weights or a treadmill or anything like that, so I rely on using water bottles as weights and a rubber band and using household equipment to gym with trying to make the most of the limited recourses I do have. I don’t have a yard so I am not bowling at the moment but I am trying to gym as hard as I can, stretch just to get some strength in at least, and keep up with as much fitness and the requirements as I possibly can.”