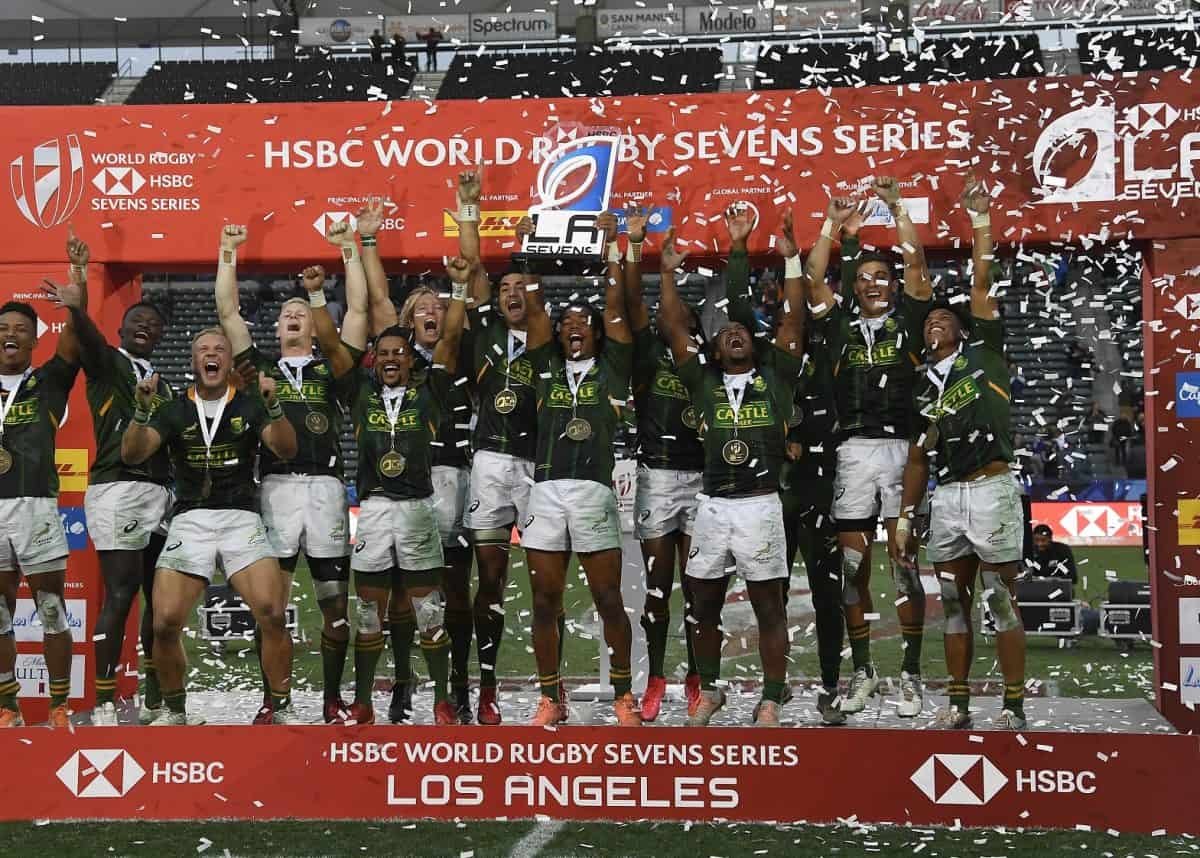 The Springbok Sevens team claimed a dramatic 29-24 win over Fiji in the final of the LA Sevens in Los Angeles early Monday morning (SA time) for their second tournament victory in the 2019/20 HSBC World Rugby Sevens Series.

The sudden death victory in the final – in which they trailed 19-0 after five minutes – came in extra time after the Blitzboks scored a converted try deep into injury time to draw level with Fiji, with Branco du Preez kicking a brilliant conversion to extend the match.

The Blitzboks then scored the golden try – when Sako Makata was worked into space – in extra time to claim 22 tournament points, closing the gap on the World Series log leaders, New Zealand, to four points.

The Blitzboks won the season opener in Dubai in November and were runners up in Cape Town in December and Sydney last month, where Fiji edged them 12-10 in the final.

This time the shoe was on the other foot although it seemed to be going the defending World Series champions’ way again at Dignity Health Sports Park as they scored three unanswered tries to take a 19-0 lead.

However, according to Springbok Sevens coach Neil Powell, the try his scored just before the break – by Blitzbok captain and Player of the Final, Stedman Gans – proved decisive.

“If we had to start the second half 19 points down, it was going to be really difficult to get back into the match,” Powell said afterwards.

“This was a proper roller coaster of emotions, but I think that try made us believe that we can still come back. Up to that point, we made silly errors and gave Fiji a chance to run onto unstructured defence.

“That try stopped the slide. The fact that we converted it as well and suddenly took seven points off that early lead made us believe that it was possible to still win the tournament.

“It was also pleasing to see that the players kept their faith in the system and trusted the guys around them. At halftime, I could sense this was far from over.”

Powell reflected on the team’s fighting spirit and pride: “They really do believe in that jersey and have massive pride playing for their country. They also trust the system and that results in the team never giving up. They play for each other as well and are determined to maintain the high standards set by those before them.”

Powell said the win was important for two more reasons – the Blitzboks are keen to start building momentum towards the Olympic Games in July and they closed the gap on New Zealand.

“We don’t look at the results all the time, rather the process, but this was important for us to close the gap on New Zealand,” said Powell, who added that he was pleased for Du Preez, who kicked the all-important conversion from a tight angle.

“Even if he plays one minute or the whole match, Branco will always give his all. He is the guy I would have nominated to take that kick if needed, as he is so consistent in that department. His impact he had in those last two minutes of the final were immense and he deserves a lot of credit for that.”