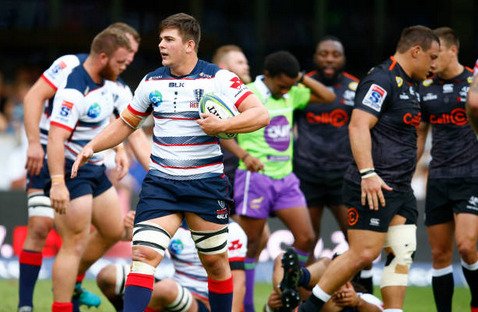 Lions coach Ivan van Rooyen made four changes – two up front and two at the back – to his starting 15 for their Super Rugby match against the Waratahs in Sydney on Friday.

A re-jigged front row will face the New South Welshmen at Bankwest Stadium, where kick-off is scheduled for 10.15 am on Friday morning (SA time).

Carlu Sadie (tighthead prop) and Jan-Henning Campher (hooker) will start, with Jannie du Plessis dropping out of the match-23 and Pieter Jansen moving to the bench. Frans van Wyk is the new replacement prop.

Jamba Ulenga, who joined the Lions in the off-season, earns his first start for his new franchise on the left-wing in place of Courtnall Skosan, while Andre Warner, who moved south across the Jukskei River from the Bulls, will run out at scrumhalf.

As a result, Morne van den Berg will start on the bench, while Skosan – who like Du Plessis is being rotated – will not feature against the Waratahs at all.

The Waratahs’ starting XV, meanwhile, shows only two changes to the team that went down against the Rebels, with Lachlan Swinton replacing Jed Holloway in the back row and Mark Nawaqanitawase returning to the wing.

The Lions will be aiming for their sixth successive victory over the Waratahs, which includes only one match in Sydney back in 2018 when the men from Johannesburg blanked their hosts by 29-0.

Interestingly, the two teams in action at Bankwest Stadium have conceded the least penalties of all the sides in Super Rugby this year, with the Emirates Lions on 24 and the Waratahs on 27.

Lions head coach Ivan van Rooyen said: “The Waratahs have lost their first three games, which will make them extremely desperate, so we are expecting a physical onslaught. They have some quality Test players and will be up for the game – we can’t be complacent because we know what is coming our way.”