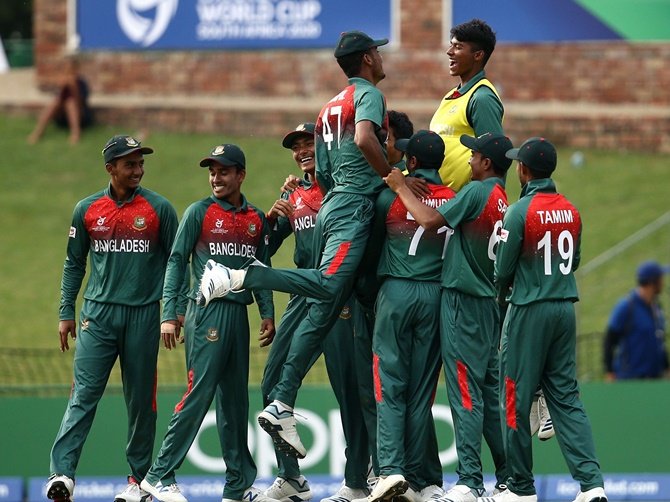 Bangladesh reached the final four of the Under-19 Cricket World Cup for the second time after an emphatic victory over hosts South Africa in Potchefstroom on Thursday.

The Tigers joined India and New Zealand in the Super League semi-finals as star turns from Tanzid Hasan and Rakibul Hasan ended the hosts’ hopes.

An impressive bowling display from Rakibul Hasan helped Bangladesh seal a convincing 104-run victory over South Africa to seal a spot in the semi-finals in Potchefstroom.

Hasan claimed figures of 5/19 as the Tigers dismissed the Proteas for 157 all out after they posted 261/5 thanks to half-centuries from Tanzid Hasan (80), Shahadat Hossain (74) and Tawhid Hridoy (51).

South Africa won the toss under sunny skies at the JB Marks Oval and elected to put Bangladesh in to bat.

That plan didn’t work for the home side as Parvez Emon (17) and Tanzid put on 60 runs for the opening stand, with the latter going on to reach 80 from 84 balls.

With an in-form batter at the crease, Hridoy walked in and played the anchoring role in two 50-run partnerships with Tanzid and Hossain, respectively, on his way to a measured 73-ball 51.

Hossain blasted an unbeaten 74 off 76 deliveries, including seven fours and one six to propel the subcontinent outfit to a competitive total.

In their chase, South Africa got off to a decent start before losing three crucial wickets within the 16th over, including Jonathan Bird and the tournament’s top run-scorer Bryce Parsons.

The home side failed to recover from that early setback and despite a valiant half-century from Luke Beaufort, Rakibul continued to chip away as they skittled out the home side with 7.3 overs to spare.

“We approached this match today as per normal, we played a few series before this World Cup and in the dressing room we discussed that we have a good strategy and just have to apply our plans on the field,” Rakibul said.

“We played with an extra spinner and we had a good day with our spin and the plan worked during the middle period.

“The wrist spinners bowled well along with the main bowlers and that’s why we did well in this game.”