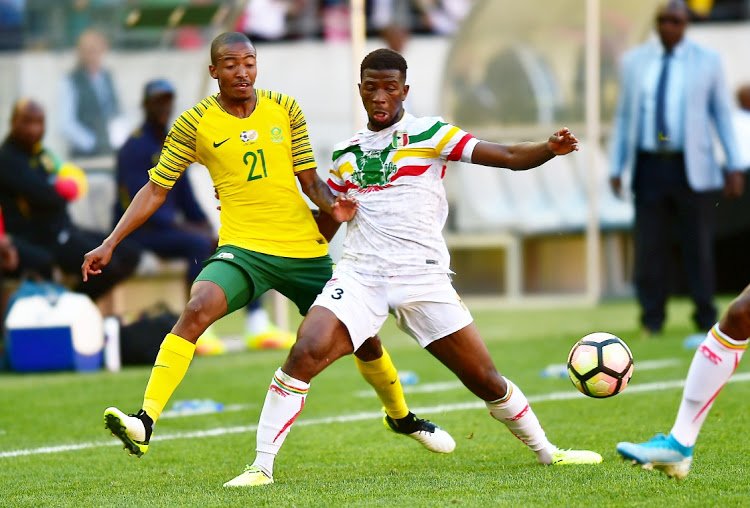 First-half goals – via a Dean Furman spot-kick and a Themba Zwane strike, had put Ntseki’s side in a commanding position at the break, before Sekou Koita’s 75th-minute goal made for an interesting finish in what was an entertaining encounter in front of a sizeable crowd.

Both teams made a lively start to proceedings, with Bafana keeper Ronwen Williams tested early on – and doing well to palm away a stinging shot from Hadi Sakho.

There was also a chance for Bradley Grobler at the other end, but he dragged his effort well wide before home defender Innocent Maela came to his side’s rescue by blocking Sekou Koita’s goal-bound shot.

That proved to be a pivotal moment as with their next attack, Bafana earned themselves a penalty after Thulani Serero had run onto Keagan Dolly’s pass before being upended in the box by Boubakar Kouyate.

Furman made no mistake from the spot as he sent Djigui Diarra the wrong way to put the hosts ahead in the 24th minute.

Dolly’s afternoon, however, was to end in disappointment when he limped off injured six minutes before the break-in Port Elizabeth.

Mali, who were not at full strength with several young players in the team, were unable to penetrate the Bafana defence – although they weren’t far away from equalising in the 44th minute when following a goalmouth scramble, Mamadou Fofana just failed to get a decisive touch from a few metres out.

Moments later though and the west African team were to find themselves 2-0 down as South Africa broke swiftly up the right-wing through Thapelo Morena, who passed inside to Thembinkosi Lorch – who in turn found Zwane, with the Sundowns man taking the ball in his stride before guiding it into the net with a neat angled finish.

Mali started the second half with purpose, and Darren Keet, on for Williams, had to be at his best to deny Lassana Coulibaly’s powerfully-hit effort.

Grobler could have put the game just about to bed when he arrived in the small box to get on the end of a Zwane cross, but the SuperSport United marksman nodded over the bar.

Instead, Mali continued to push for a way back into the match and they were to level matters in the 75th minute when Koita combined superbly with Amadou Haidara before dispatching a low shot in at the near post.

Koita then looked set for an equaliser seven minutes later, only to be stopped in his tracks by a fine last-ditch tackle by Erick Mathoho.

However, with Mali now hopeful of an equaliser, gaps opened up for the Bafana attackers and it took a breathtaking save from Diarra in the 90th minute to stop substitute Kermit Erasmus scoring in his home town.

That was the last real goalmouth action as Bafana closed out the win with an overall showing which deserved the victory.

Next up for Bafana is a trip to Ghana for their opening 2021 Africa Cup of Nations qualifier on November 14.