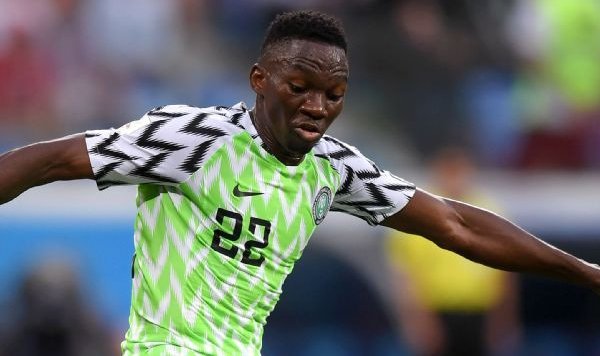 Kenneth Omeruo’s header in the 73rd minute was all Nigeria needed to beat Guinea on Wednesday night in Alexandria, and become the first team to reach the round of 16 of the Total Africa Cup of Nations Egypt 2019.

The victory saw Nigeria retain top spot in Group B with six points while Guinea remain third with one.

Guinea’s Syli Nationale are now faced with a must-win tie against Burundi in their final group match while Nigeria are certain of a place at the next phase.

Nigeria coach Gernot Rohr made changes to his team, with Odion Ighalo, Ahmed Musa, Leon Balogun and Moses Simon all starting, a clear intent that he was going in for an attacking game.

His Guinean counterpart Paul Put handed star midfielder Naby Keita his first start in a competitive match since May 1 as he looked to put up a solid team to get their first three points of the tournament.

Guinea showed hunger early and had a shot at goal in the second minute of the match, Ibrahim Cisse trying his luck with a shot from distance that was spilt by keeper Daniel Akpeyi and whacked away by the defence.

In the 10th minute, Alex Iwobi lost possession in midfield and the ball turned quickly into offence with Amadaou Diawara sending Sory Kaba though on goal, but a backtracking Balogun made an important intervention.

Nigeria also had their opportunities in front of goal. In the 13th minute, Wilfred Ndidi’s header off a Peter Etebo corner went just over while Ighalo hit the side netting later after being sent through by Ndidi.

In the second half, Nigeria pressed harder on the gas pedals and Iwobi had a chance on the hour mark with a well-curled effort which was turned behind for a corner by the Guinean keeper.

Paul Put had to be jolted into change on 70 minutes pulling out Keita who had gone down close to three times as he was heavily bombarded by the Nigerian midfield. In his place came Alhassane Bangoura.

No sooner had Keita stepped off the pitch than Nigeria got their goal, Omeruo rising highest at the edge of the six-yard box to angle a header past the keeper off a corner from Moses.

Nigeria’s Kenneth Omeruo was named ‘Man of the Match’.

Burundi face Madagascar in the other Group E match in a battle of two debutants on Thursday in Alexandria.

Uganda and Zimbabwe settle for 1-1 draw in Africa Cup
DR Congo on fire against Zimbabwe, run out 4-0 winners