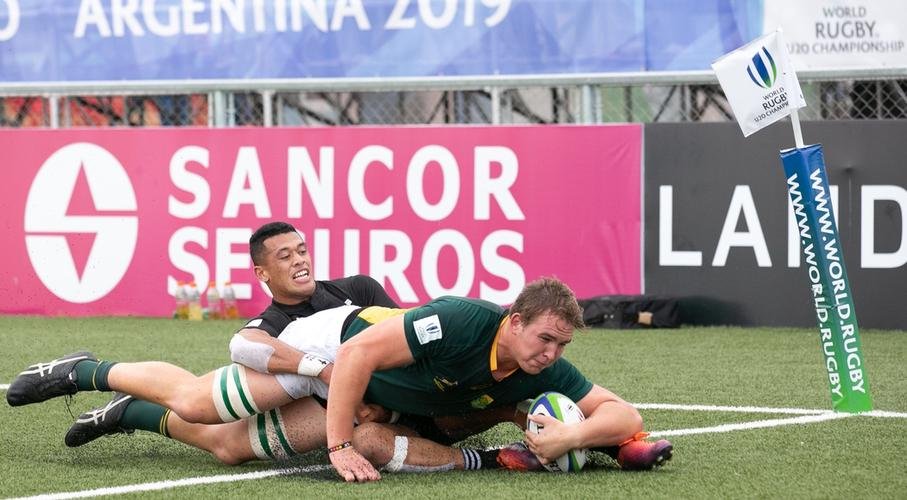 South Africa Under-20 on Wednesday booked themselves a World Cup semifinal against France with a 25-17 victory over New Zealand in their final pool match at the Racecourse Stadium in Rosario, Argentina.

This victory means the SA Under-20s are the only unbeaten team left in the competition and they qualified in the top spot for the semifinals, which will be played in Rosario on Monday. France are the defending champions.

The Junior Springboks were out of the blocks quickly with their first try, by Vaughen Isaacs (fullback), in the seventh minute.

The second half was tightly fought as New Zealand came back hard on attack and tightened up their defence.

They were awarded a penalty try and that saw the Junior Springboks hold a slender 19-10 lead for most of the half.

However, two penalty goals by Sanele Nohamba (replacement scrumhalf) cancelled out New Zealand’s second try, which sealed the victory for the South Africans.

Both sides entered the clash knowing that the losing team would need to secure a bonus point, while ensuring that they do not suffer a heavy defeat to advance to the semifinals, after France secured a bonus point in their 47-26 defeat against hosts, Argentina.

“I am very pleased,” SA coach Roux said afterwards. “It was a great effort by the players.

“They executed the game plan excellently.

“We will enjoy it tonight, but there are still two games left, so we need to keep our feet on the ground and prepare for the next game.”

Roux lauded the quality of the team’s performance:

“We worked hard on our scrums, lineouts and mauls, and that was excellent, but the outstanding part of our game was our defence. The players showed a lot of character and all credit to them for that.”

The SA Under-20 coach said the French will provide “tough opposition” in their semifinal.

“We played against France last year and the year before. We will have a look at the games and sit down tomorrow and work out a plan,” said Roux.

“At this stage, however, the important thing is to get the players ready and to ensure that we use every rest day as effectively as possible.”

Isaacs’ try came after he received a sharp pass out wide from Rikus Pretorius (centre), with Hendrikse adding his first penalty goal six minutes later to hand the Junior Boks an 8-0 lead.

They built on this shortly after a fine try by Van der Mescht, who gathered the ball from a stolen lineout and showed his pace to power his way to the tryline.

The Junior Springboks were reduced to 14 men shortly after as Dylan Richardson (flank) received a yellow card for a knock-down.

Shortly after being restored to 15 players, Sibusiso Sangweni (flank) was sent to the sin-bin for a grass-cutter.

With the SA U20s’ defence holding well, New Zealand opted for a penalty goal in the 34th minute, and that proved to be their only points in the half.

Roux’s charges, in turn, managed to apply consistent pressure until the break and their efforts allowed Hendrikse to add two more penalty goals in the dying minutes to push the team 19-3 ahead at halftime.

New Zealand earned the first points in the second half through a penalty try after Junior Springbok flyhalf James Mollentze made an early tackle on the tryline, with the offence seeing him also being sent to the sin-bin.

After several hard-fought minutes of rugby, Nohamba slotted over the team’s fourth penalty goal after another dominant scrum to stretch the team’s lead to 22-10 with nine minutes to play.

The Junior Boks’ lead shrunk again shortly thereafter as Lalomilo Lalomilo scored a try out wide, which saw them trail by five points with five minutes to play.

Nohamba, however, gave the SA U20s an eight-point buffer with his second penalty goal in the 78th minute, which denied the New Zealanders the bonus point they needed to progress to the top-four and saw the Junior Springboks book their semi-final spot.