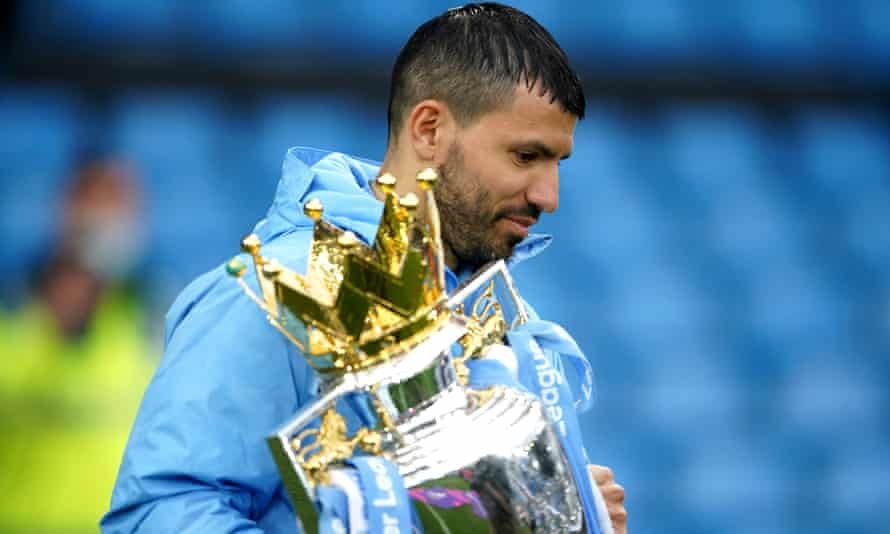 It has been one of the exciting and successful Career for the Argentine forward Sergio Aguero at the English Premier League winners Manchester City, but with all said and done it is now time for the legendary Player to leave Manchester City.

Sergio Aguero lifted the league title for a fifth time after his side’s 5-0 win over Everton at the Etihad Stadium in a match that was attended by 10,000 fans, netting twice as a second half substitute. 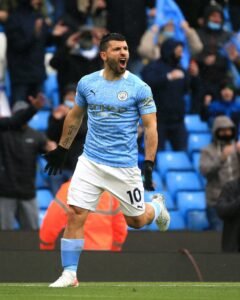 Sergio Aguero’s brace against Everton saw him break Wayne Rooney goal record scored by a Premier League player at a single club, with the double taking him to 184 at the Etihad.

He started his final Premier League game on the bench and didn’t even warm up ahead of the contest.

Instead, his first appearance was before kick-off through a guard of honour provided by his City teammates.

It was Aguero’s choice to come on in the second half of the match, and City didn’t need him in the first period, going 2-0 up in just 14 minutes.

But amidst the celebration, and love shown to the striker in the last days Pep Guardiola did not hide his emotional state, holding back his tears even as he revealed that Sergio Aguero was set to join Barcelona after leaving Manchester City.

Sergio Aguero bid an emotional farewell to Manchester City fans with a brace against Everton in his final game at the Etihad as a City player. 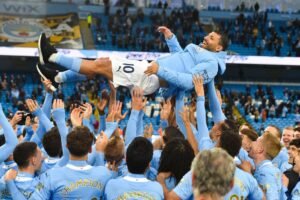 The striker, who leaves City after ten seasons, was given a presentation by the club to show their appreciation for his contribution that has seen him become the all-time record goal-scorer for the Blues, as well as the Premier League’s top overseas goal-scorer, and the player with the most goals in the league for a single club – a feat he secured with that last day brace.

After the game, Aguero refused to comment on where he would go next when asked by Sky Sports, preferring to focus on the day’s celebrations where City lifted the Premier League trophy.

However, His Coach Pep Guardiola wasnt guarded and let his tongue slip with the good news and announced that Aguero’s, destination in a later interview with Match of the Day.

“I’m pretty sure, maybe I reveal a secret. Maybe he is close to agreeing a deal for the club of my heart – for Barcelona.

“He is going to be playing alongside the best player of all time, Lionel Messi.

“I’m pretty sure he is going to enjoy. And make my club Barcelona are stronger and stronger with him on the pitch.”

Earlier, Guardiola had given an emotional interview when asked to describe Aguero’s impact at City.

We love him so much,” he told Sky Sports, fighting back tears.

“He’s a special person for all of us. He’s so nice, so nice. He helped me a lot. We cannot replace him, we cannot,” he said after the match.

“There are many players that this club have had – David Silva helped this club to be what it is. He showed his quality in 20 minutes.”

Aguero has won the lot since joining the Blues in 2011 and he has the chance to improve his trophy collection when his team play Chelsea in the Champions League final next weekend.