Apart from winning the trophy, Lionel Messi has the chance to break several World Cup records in Qatar this year.

The Argentine forward already opened his World Cup account by scoring against Saudi Arabia. However, Messi’s goal was not enough to secure a win for his nation as Saudi Arabia turned things around to secure a 2-1 victory. Lionel Messi has set several records in the football world while playing for Argentina. He is the most-capped Argentine player (166).

Messi has also scored more goals (92) for Argentina than any other player. He also has the most assists for the nation that won Copa America last year.

Lionel Messi might not break Cristiano Ronaldo’s goalscoring record in international games in this World Cup, but there are other records he is likely to break.

1. Most Games Ever Played In World Cups

Lionel Messi could break the record for most games played in World Cups if Argentina reaches the last four and he plays in every game.

The record is currently held by Lothar Matthaus, who made 25 appearances for Germany. Lionel Messi made his 20th Wold Cup appearance against Saudi Arabia.

For Lionel Messi to break this record, Argentina must win their remaining group stage matches and continue with the same spirit up to the semis.

One of the World Cup records Lionel Messi could break in Qatar is most assists. However, this one will require him to be on form throughout the tournament.

The record for most assists in World Cup history is currently held by Pele, who has 10 to his name. Lionel Messi, who is aiming to break this record, has five assists as things stand.

The Argentine international has been on form since the start of the 2022-23 season. He has provided 14 assists for Paris Saint-Germain; hence it would not come as a surprise if he provides at least six assists in this tournament.

3. Argentine With Most World Cup Goals

The Argentine with the most goals in World Cup history is Gabriel Batistuta (10). Lionel Messi currently has seven goals after scoring against Saudi Arabia in his nation’s opening match.

Due to Lionel Messi’s form since the start of the 2022-23 season, he is likely to break this record.

The Paris Saint-Germain attacker only needs to have his shooting boots on to go down in history as Argentina’s all-time top scorer in World Cup.

Lionel Messi could break the record for the most World Cup matches won during this campaign. The record is currently held by the legendary Miroslav Klose.

For the seven-time Ballon d’Or winner to break the record for most wins in World Cup, Argentina has to win all its matches, including the final.

5. Appearances For Argentina In World Cup

This is probably the record that Lionel Messi is going to smash faster. The Argentina player with the most World Cup appearances is Diego Maradona.

Diego Maradona made 21 appearances for Argentina in World Cup. Lionel Messi has so far made 20 appearances. And that means he will break this record in Argentina’s final group stage fixture if he remains fit until then.

Lionel Messi won his first Golden Ball in 2014 as Argentina reached the finals of the World Cup played in Brazil. Germany eventually won the trophy. 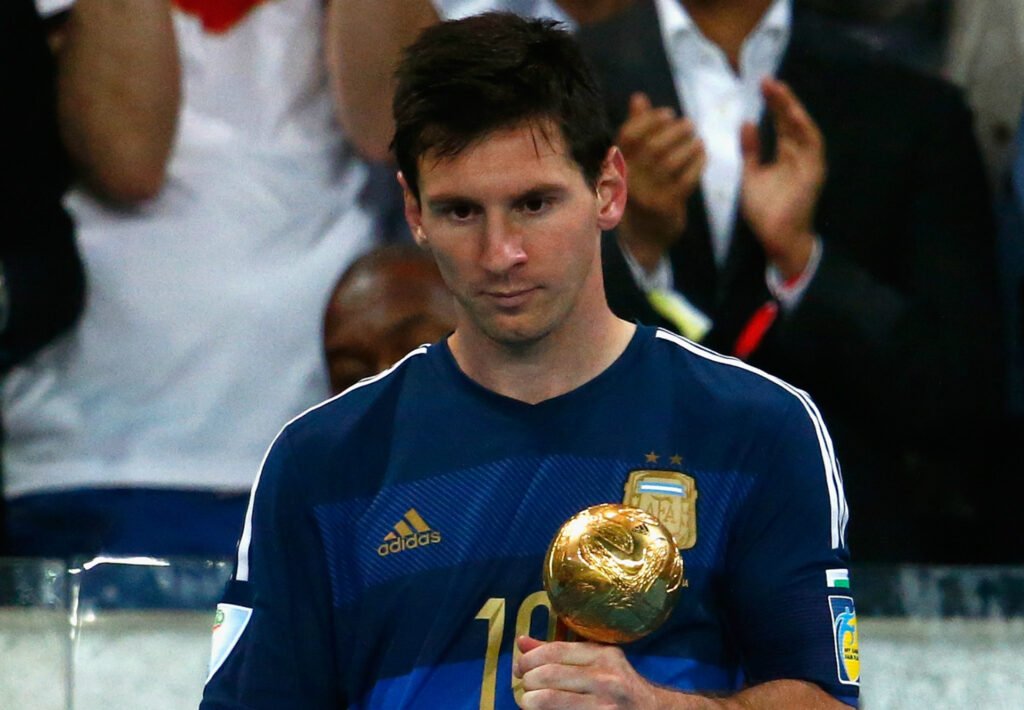 Lionel Messi won his first Golden Ball at the end of the 2014 World Cup. Photo/ Goal.com.

Apart from Lionel Messi, the other player who could break this record is Luka Modric. The Croatia midfielder won the Golden Ball in the last World Cup due to his superb individual performance.