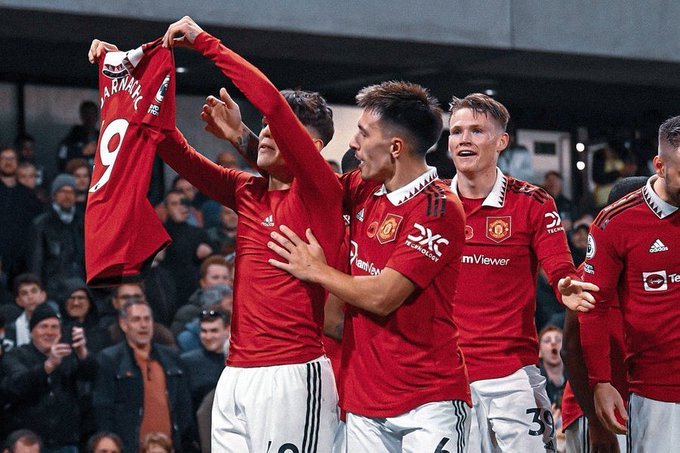 Manchester United finished off the last match before the FIFA World Cup break with a 2-1 win over Fulham in the Premier League with teenager Alejandro Garnacho scoring in stoppage time to seal the victory for the Red Devils at the Craven Cottage.

Erik ten Hag’s side hit the front through Christian Eriksen’s first Manchester United goal early on in the match with 14 minutes on the clock, but they looked set to be denied by their former winger Dan James when he levelled within two minutes of entering the clash.

Fulham appeared the more likely the winners from there as the visitors relied on a string of saves from David de Gea, but Garnacho slotted home three minutes into stoppage time to stun Craven Cottage.

The 18-year-old’s clinical finish lifted United to within three points of the Premier League’s top four, ensuring the Red Devils entered the six-week break in positive mood, with the next match on boxing day.

De Gea was forced to save from Carlos Vinicius as Fulham threatened early on, but United went ahead after 14 minutes when Bruno Fernandes crossed for Eriksen, who fired home from close range.

Though Fulham continued to enjoy long spells of possession, Anthony Martial missed two chances to double United’s lead before the break, forcing a one-on-one save from Bernd Leno before nodding Luke Shaw’s cross over.

Eriksen then stabbed narrowly wide as half-time approached, before De Gea produced reflex saves to deny Vinicius and Tim Ream as Fulham stepped up their search for a leveller after the break.

However, the Spaniard’s resistance was finally broken after 61 minutes, with Fulham substitute James pouncing on Tom Cairney’s cross to poke home a deserved equaliser.

United then spent long periods pinned back as Fulham continued to press, but there was to be one final twist as Garnacho raced onto Eriksen’s pass before side-footing beyond Leno, breaking Fulham hearts at the last.

Fulham have either been promoted to or relegated from the Premier League in each of the last five seasons, but are well placed to end that up-and-down run as they sit ninth, having already matched the five wins they gained in their previous top-flight campaign in 2020-21.

The end result was harsh on Fulham, who had looked to be getting another excellent result at home after they had won three times at Craven Cottage and drawn 2-2 with Liverpool in the opening match of the season.

Fulham will next be in action on December 26 when they visit Crystal Palace in the Premier League while Manchester United will take on Nottingham Forest at Old Trafford a day later.