5 best UFC fights of all time We will never forget the best UFC fights of all time due to the amazing comebacks and brutal knockouts we saw in the ring.

The Ultimate Fighting Championship (UFC) has brought us several amazing fights since it became a dominant force in the MMA world.

We have seen legendary fighters like Conor McGregor step into the ring and fight with the aggression, skill and competitiveness we all want to see.

This article has ranked the top five best UFC fights of all time in order of iconism.

Numerous sources rank the Diego Sanchez vs Clay Guida bout as one of the best UFC fights of all time. The two fighters squared off at The Ultimate Fighter 9 Finale.

Both Sanchez and Guida were known for their offensive abilities, and their bout was an opportunity to prove their superiority.

Diego Sanchez dominated the fight in the first round as he landed an insane amount of strikes on his opponent.

Towards the end of the first round, Sanchez dropped a head kick on Clay Guida, which helped him regain his consciousness and become active in the second round.

Clay Guida controlled the fight in the second round as he came up with a better game plan. However, it didn’t take long before Sanchez battered Guida’s face with strong elbow kicks.

Diego Sanchez won the fight via split decision. Due to the competitiveness of the bout, it earned UFC Fight of the Night and Fight of the Year honours.

Gray Maynard went into the fight with the aim of becoming the new champion. He was quick in offence earlier in the fight, and many thought he was going to win it.

However, Frankie Edgar proved why he was the champion as he retorted with a good combination of punches, strikes and takedowns. He eventually won the fight and retained his lightweight title. 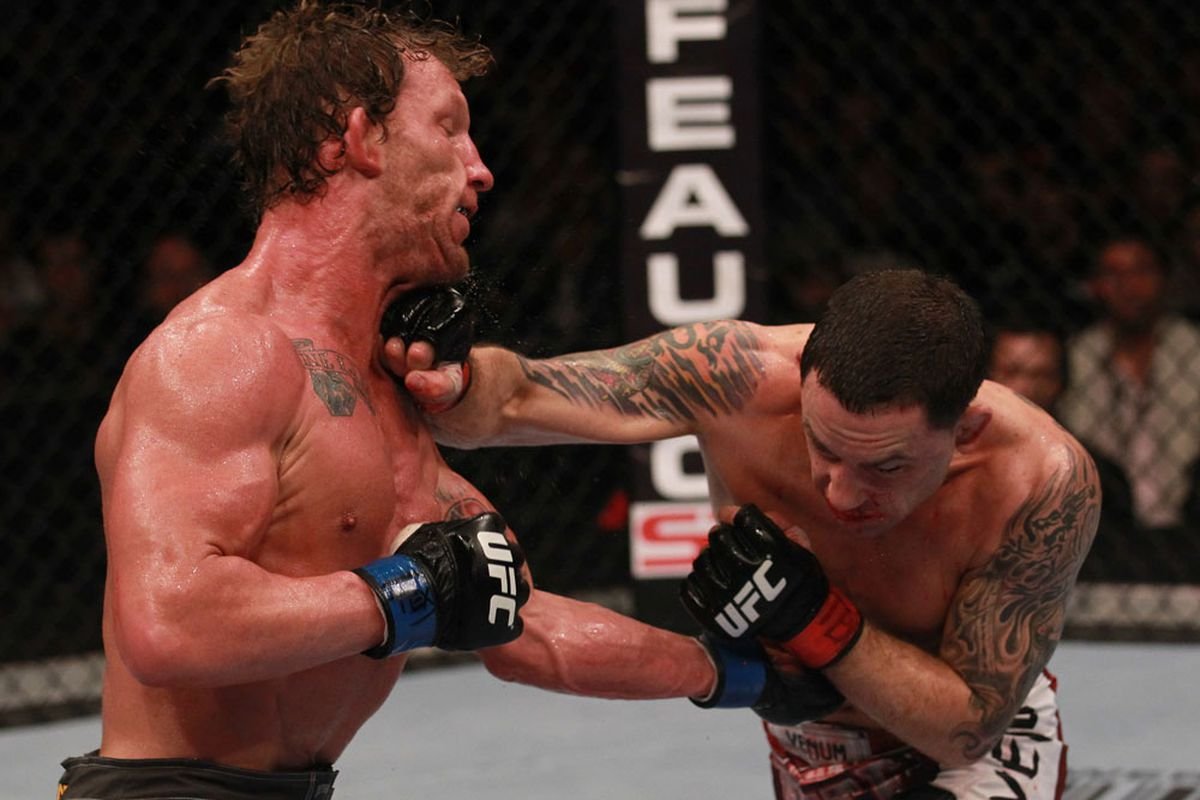 This fight took place in 2007 at UFC 79 and is widely regarded as one of the best UFC fights of all time.

Chuck Lidell and Wanderlei Silva ranked amongst the hard hitters when they faced each other in the octagon ring.

The fans were eagerly waiting for this fight, and in the end, it completely lived up to the hype. The bout was fierce, and both fighters stood their ground in the first two rounds.

Chuck Lidell rocked his opponent with a spinning backfire before slamming him to the ground as hard as he could in the third round to win the fight.

2. Stephan Bonnar vs Forrest Griffin I

The fight between Stephen Bonnar and Forrest Griffin always gets a mention when talking about the best UFC fights.

This fight, which was broadcast live on Spike TV, is arguably the one that brought UFC to the limelight. Nobody expected Stephen Bonnar and Forest Griffin to entertain the fans the way they did that night.

The two men fought with intensity as they showcased their skills and tactics in the octagon ring. In the end, it was Forrest Griffin who emerged victorious, leaving MMA supporters in awe. The Nate Diaz vs Conor McGregor bout in August 2016 is arguably the best UFC fight we have ever seen. It was the second time that the two legendary fighters were facing each other in the octagon ring.

This was an epic display of fighting for full five rounds with no fighter showing signs of giving in. Eventually, it was the Irishman Conor McGregor who emerged victorious.

McGregor avenged the loss he suffered when the two faced each other in March 2016.

The greatest female MMA fighters of all time
Cris Cyborg: The only Grand Slam Champion in MMA