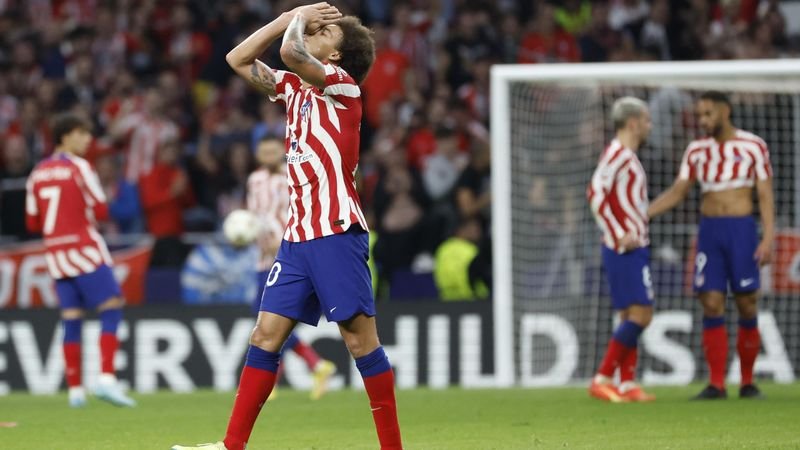 Atletico players were gutted after the match. | PHOTO: Courtesy |

Atletico Madrid crashed out of the UEFA Champions League courtesy of a 2-2 draw with Bayer Leverkusen with a last minute penalty by Carrasco saved to deny the La Liga side a win at their home stadium.

Requiring a victory to maintain any hopes of progressing from Group B, Diego Simeone’s side twice came from behind as Carrasco and Rodrigo de Paul cancelled out goals from Moussa Diaby and Chelsea loanee Callum Hudson-Odoi.

There was late drama at the Wanda Metropolitano, where referee Clement Turpin had initially blown the full-time whistle before VAR penalised Piero Hincapie for handball in the box to hand Atleti a penalty.

However, Carrasco was denied by Lukas Hradecky and Atletico saw a follow-up hit the crossbar and a second rebound incredibly deflected over as they bowed out at the group stage for the first time in five years.

Leverkusen broke the dreadlock taking the lead in the ninth minute when Antoine Griezmann was dispossessed outside the Atletico penalty area, before Adam Hlozek released Diaby to sweep into the roof of the net.

Griezmann was again involved as the hosts equalised midway through the first half; the France forward producing a neat lay-off for Carrasco to drill home from 20 yards out.

But Atleti were their own worst enemy again seven minutes later with Nadiem Amiri robbing Angel Correa of possession 30 yards from goal and feeding Hudson-Odoi, who calmly tucked away. Simeone introduced De Paul at half-time and the midfielder dragged the hosts level again within five minutes of the restart; neatly whipping a 20-yard effort into the far corner.

The hosts went in search of the winning goal with Griezmann and Carrasco stinging Hradecky’s palms from distance, while the former also hit the side netting and went close with an ambitious acrobatic attempt.

Atleti were handed a dramatic sign of hope when the referee, who had initially blown for full-time, pointed to the spot after consulting his pitchside monitor.

Yet they could not capitalise in a remarkable finale. Carrasco was denied from 12 yards as he saw his low penalty saved, before Saul Niguez’s head struck the bar and Reinildo’s effort was diverted over to end Atletico’s hopes.

Atletico Madrid were denies at the stoppage time from the penalty spot against Bayer Leverkusen. | PHOTO: Courtesy |

Following their stalemate in Madrid, both sides are unable to usurp Club Brugge or Porto at the top of Group B, and will now battle for third place – as both stand a chance to finish third and fall into the Europa League.

Although, it may yet be a good omen for Atletico, who have gone on to lift the Europa League trophy on the previous two occasions when they were eliminated from the Champions League – in 2009-10 and 2017-18.

Despite the disappointment of elimination, Griezmann hit another milestone as he set up Carrasco’s opener.

The France forward, who has been directly involved in 36 Champions League goals for Los Rojiblancos, became the first Atletico player to reach double figures in goals (26) and assists (10) in the competition.

On a day when Atletico needed goals, Morata was unable to step up and deliver for his side.

The Spain international was substituted in the 61st minute after failing to register a shot on goal, while his tallies of 14 touches and nine passes were the lowest recorded by any starting player for either side.

Before concluding their Champions League campaigns next Tuesday, both sides are on the road this weekend. Atletico travel to Cadiz in a La Liga clash on Saturday, while Leverkusen are away at RB Leipzig in the Bundesliga.