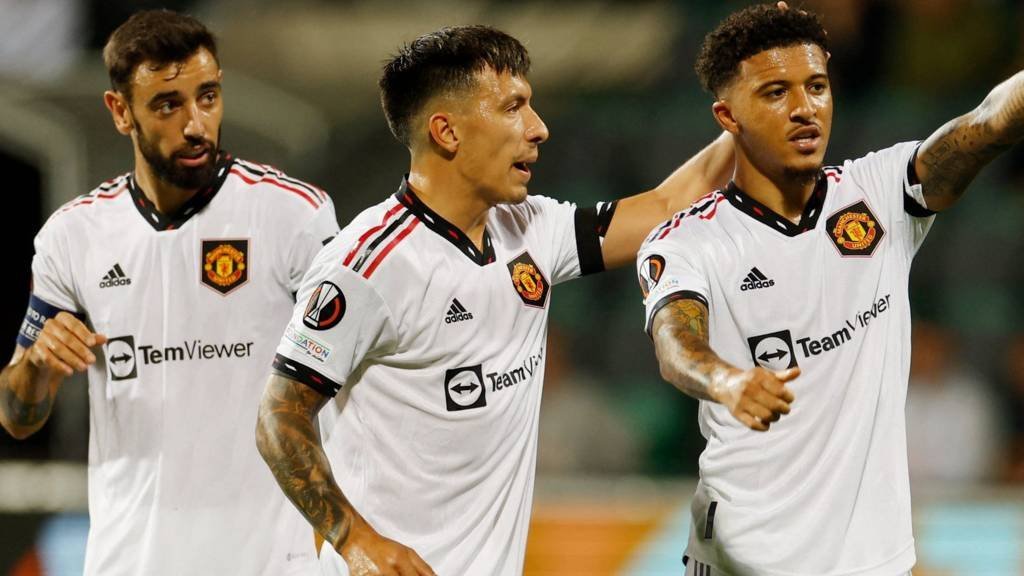 Cristiano Ronaldo scored his first goal of the campaign as Manchester United got their Europa League campaign up and running with a 2-0 win over Sheriff on Thursday night.

Ronaldo, led the attacking line as Erik ten Hag kept rotation to a minimum against the side that stunned Real Madrid in last season’s UEFA Champions League, drilled home a first-half penalty to make it 2-0 to the Red Devils, after Jadon Sancho had opened the scoring.

Having moved onto 699 club goals with his penalty, Ronaldo missed a chance to reach the 700 milestone after the break, but United produced a controlled performance to seal out the victory.

United were direly in need of three points following last week’s home defeat to Real Sociedad in their opening Group E game at .

Although Sheriff started well, United took the lead with their first real attack after 17 minutes when Sancho turned on Christian Eriksen’s pass and tucked a superb finish into the bottom-right corner. United were soon gifted an opportunity to double their lead by Patrick Kpozo, who was tempted into a foul by Diogo Dalot.

Ronaldo, who has had to settle for a substitute role in United’s last four Premier League matches, lashed his penalty straight down the middle.

Radeljic was again on hand to clear as Ronaldo attacked the back post after the break, before Rasheed Akanbi almost caught De Gea out with a sumptuous lob from long range. 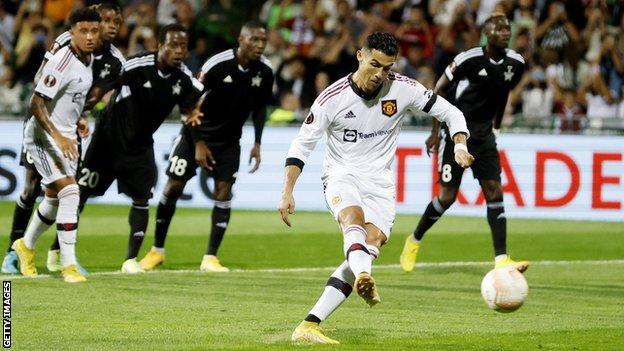 Cristiano Ronaldo scored from the spot to seal the victory for Manchester United against Sheriff in the Europa League clash on Thursday, September 15 2022. | PHOTO: Getty Images |

Ronaldo side-footed wide of the top-right corner from 18 yards out as a chance for his 700th club goal went begging, though United had little trouble in sealing a fifth win in their last six outings.

While Ten Hag’s main focus will be on re-establishing United as Premier League contenders, the strong side he fielded on Thursday demonstrated his desire to bounce back from last week’s loss to La Real.

With Sheriff having picked up a win on matchday one, United’s triumph saw them retain their status as favourites to progress from the group.

Ten Hag, meanwhile, has lost just two of his 21 away matches in major competitions as a manager (W13 D6), against Getafe in February 2020 and Liverpool in December 2020.

Ronaldo, a five-time Champions League winner – including one with Manchester United, with a record 140 goals in Europe’s premier club competition, never seemed thrilled by the prospect of featuring in the Europa League this campaign.

After failing to secure an exit in the recent transfer window, Ronaldo had gone seven games without a goal, but he took his chance when it came on Thursday.

It might have been his 699th goal at club level, yet it was his first in the Europa League.

Sancho’s improved domestic form led to speculation he would be named in Gareth Southgate’s squad for England’s upcoming Nations League fixtures, but the former Borussia Dortmund winger has been left out by Southgate.

He responded in fine fashion, however, turning to drill home his third goal of the campaign in all competitions, moving him level with Marcus Rashford. No United player has scored more.

Domestic postponements owing to the death of Queen Elizabeth II mean Manchester United are without a Premier League fixture until they face rivals and champions Manchester City on October 2 after the international break. Sheriff host Zimbru Chisinau in the Moldovan top-flight on Sunday.