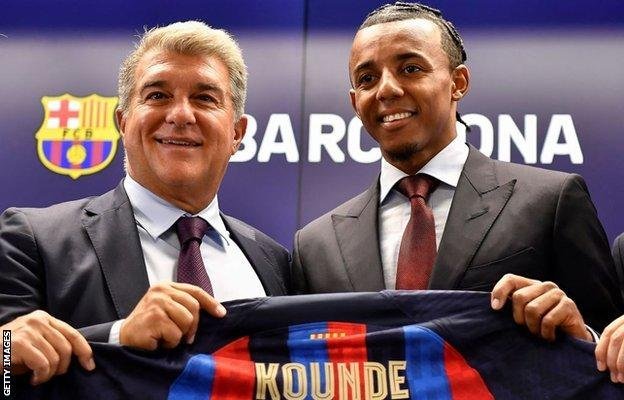 Barcelona has not managed to register Jules Kounde after completing the signature from Sevilla, and as the window transfer nears to end Barcelona coach Xavi has hinted on registration reports.

Jules Kounde did not play for Barcelona as he has not been registered yet as they drew a 0-0 against Rayo Vallecano at home, despite dominating the game.

The Catalan side had to rush through the registrations of summer signings Raphinha, Robert Lewandowski, Franck Kessie, and Andreas Christensen before the game, as well as those of Sergi Roberto and Ousmane Dembele, whose contracts expired in the summer before new deals were signed.

After the signature, Kounde was not registered and reports allege was due to match sharpness.

Xavi has now revealed his status before the weekend’s match in Sociedad. Barcelona is yet to register Jules Kounde; Photo/Transfermarkrt

Xavi says he still concerned about the registration.

“Kounde’s registration? We’re still waiting. There’s no news,” he admitted, meaning that unless there is a dramatic shift between now and kick-off, the France international will not be available.

Something that could cause such a movement would be a transfer for Pierre-Emerick Aubameyang or Memphis Depay, who are linked with Chelsea and Juventus respectively.

Xavi, though, is not holding out hope of this and is not entertaining talk of adding to his squad in the meantime.

“Do we need new signings? At the moment, neither Aubameyang nor Memphis Depay have left. If there’s an offer for either of them, we’ll see what happens with the squad. But right now the priority is to register Jules Kounde.”

Where will Xavi use Kounde?

The Frenchman has arrived in part because of his versatility and capacity to play as a right-back, but Xavi dropped a hint that Barcelona is still in the market for a full-back when asked where he sees Kounde playing for his club.

Xavi says he is unaware of any progress towards Kounde registration; Photo/90min

“I prefer him as a center-back,” he admits. “We wanted to sign Cesar Azpilicueta but it couldn’t be. We’ll have to see what we can do… We have players who can adapt to this position. Sergino Dest? He knows about the situation.

“Kounde is training really well. He’s great with the ball. I think we signed a very good player. Now we need to sell some players to register him.”