David Alaba prodded home when Eintracht failed to deal with a first-half corner to give Carlo Ancelotti’s men the lead in Helsinki, before Benzema fired past Kevin Trapp 20 minutes after the break to seal the win.

Benzema’s effort took him to 324 goals in all competitions for Madrid, putting him one ahead of legendary Spain forward Raul and trailing only Cristiano Ronaldo (450). 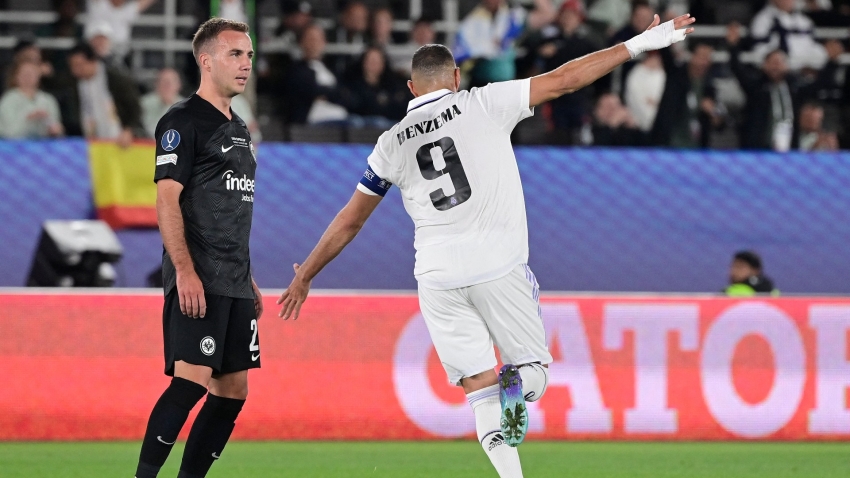 Having made a bright start, Europa League victors Eintracht were ultimately second best as Madrid cruised to victory, offering a reminder of their nous on the European stage at the outset of the new season.

Vinicius again went close when Trapp tipped his low effort around the post 36 minutes in, but Madrid broke the deadlock from the resulting corner as Casemiro nodded down for Alaba to convert into a gaping net.

Benzema flashed a fierce volley wide of the bottom-left corner as Madrid ended the first half on top, before Trapp made a reflex save from Vinicius’ left-footed strike 10 minutes after the break.

With Madrid establishing greater control, Casemiro rattled the crossbar with a sweet left-footed strike from range before Courtois made a routine save when Ansgar Knauff led a rare Eintracht foray.

But Benzema, the outstanding candidate for the Ballon d’Or, was determined to have the final say, drilling Vinicius’ cut-back under Trapp to ensure LaLiga champions Madrid would take another piece of silverware back to the Spanish capital.

Another title for continental kings Madrid

Madrid won the Super Cup for the fifth time on Wednesday, as they atoned for a memorable defeat in their last appearance in the competition (4-2 v Atletico Madrid in 2018). 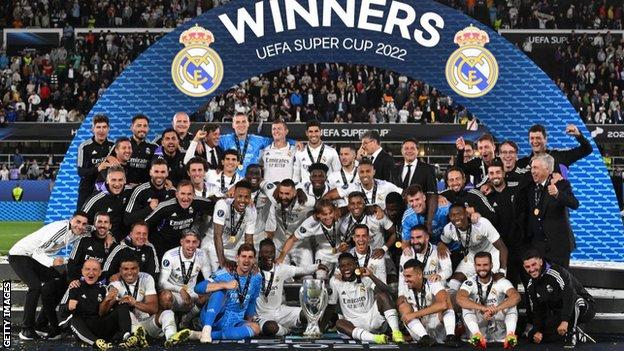 The results means the Champions League holders have won nine of the last 10 editions while the Spanish giants have won 17 of their last 19 one-legged finals.

Benzema’s unbelievable return of 15 Champions League goals helped Madrid to their 14th European crown last season, and the France star picked up where he left off to steal the headlines in Finland.

Only Ronaldo has now outscored Benzema in the famous white shirt, while his bid to be named the world’s best player has gone from strength to strength.

His fourth triumph in the competition (having also won with Milan in 2003 and 2007 and Madrid in 2014) saw him move one clear of Pep Guardiola.

Madrid begin the defence of their LaLiga title at Almeria on Sunday, while Frankfurt go to Hertha Berlin in the Bundesliga on Saturday.