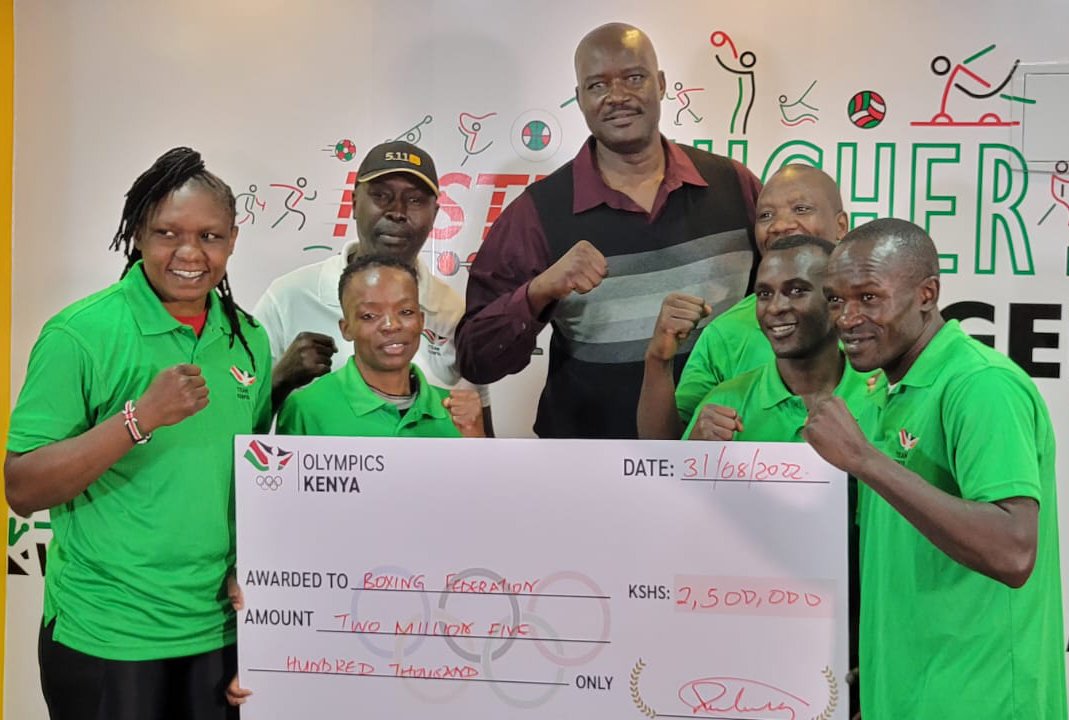 The National Olympic Committee of Kenya (NOCK) has provided support to the Boxing Federation as the national team starts preparations for the 2022 Africa Championships which will also double up as a qualification tournament for the 2023 World Championships.

The provisional team of 9 athletes and 2 officials is set to depart for Maputo, Mozambique on Wednesday for the Games which will be held in the city from 7th-19th September 2022.

After a triumphant National Trials held over this past weekend, a total of 29 boxers; 16 male and 13 female were selected and reported to residential camp on Tuesday, 30th August at Mathare depot in readiness for the 20th edition of the Africa Boxing Championship in Maputo, Mozambique.

Speaking during the sponsorship presentation, NOC-K Secretary General Francis Mutuku said the tournament was also an important step towards the 2024 Olympic Games in Paris.

“Coming straight from Birmingham Commonwealth Games, in less than a month, and organizing a National Trials is quite an impeccable feat by the federation and we commend it. Our main aim is to ensure we perform even better towards Paris 2024 and in this, supporting all federations during this period.”

“A day ago, the countdown towards the Olympic Games in Paris was marked at two years, meaning we’re a year and some change to the Games and with the political situation in the country, and the Fund currently on hold, we have to come forth and help all affiliate members continue with their activities as Sports never stops.”

Adding to the support the Committee is giving the Boxing family, Light-weight Christine Ongare, who has previously won a bronze medal in the Championship is also in a Paris 2024 Scholarship from the Olympics Solidarity Program to ensure she qualifies and improves on her Tokyo 2020 performance.

Speaking during the cheque handover, Head Coach Benjamin Moses and the Secretary General David Munuhe thanked NOC-K for coming to their rescue and supporting the team.

“Experience is not gained in the gym, but in competition. We have to be the best in Africa before we’re the best in the world, so our eyes are on the prize heading to the Championship. We were stuck, but now a smile on the face only gives more motivation to the boxers.” Head Coach, Benjamin Moses said.

Team captain Okoth believes the support will be massive for the team and they will be more encouraged to do well. Personally, he wants to defend his title.

“Hearing new boxers in camp get excited to train with me and look up to me is such a great honor. As the captain also, it motivates me. Last month, we had tough luck in Birmingham, but that’s just how sports is, so in Maputo, we’re putting our best foot forward and even more motivated having gained experience,” he said.

At the last Africa Championships in 2017 in Brazzaville in the Republic of Congo, Kenya placed eighth with one gold from Okoth and four bronze medals by light-fly Bakari who made his international debut and middleweight John Kyalo.

Light-flyweight Christine Ongare and middle Elizabeth Akinyi both of whom made history as the first Kenyan female boxers to win medals in an international tournament also got bronze.