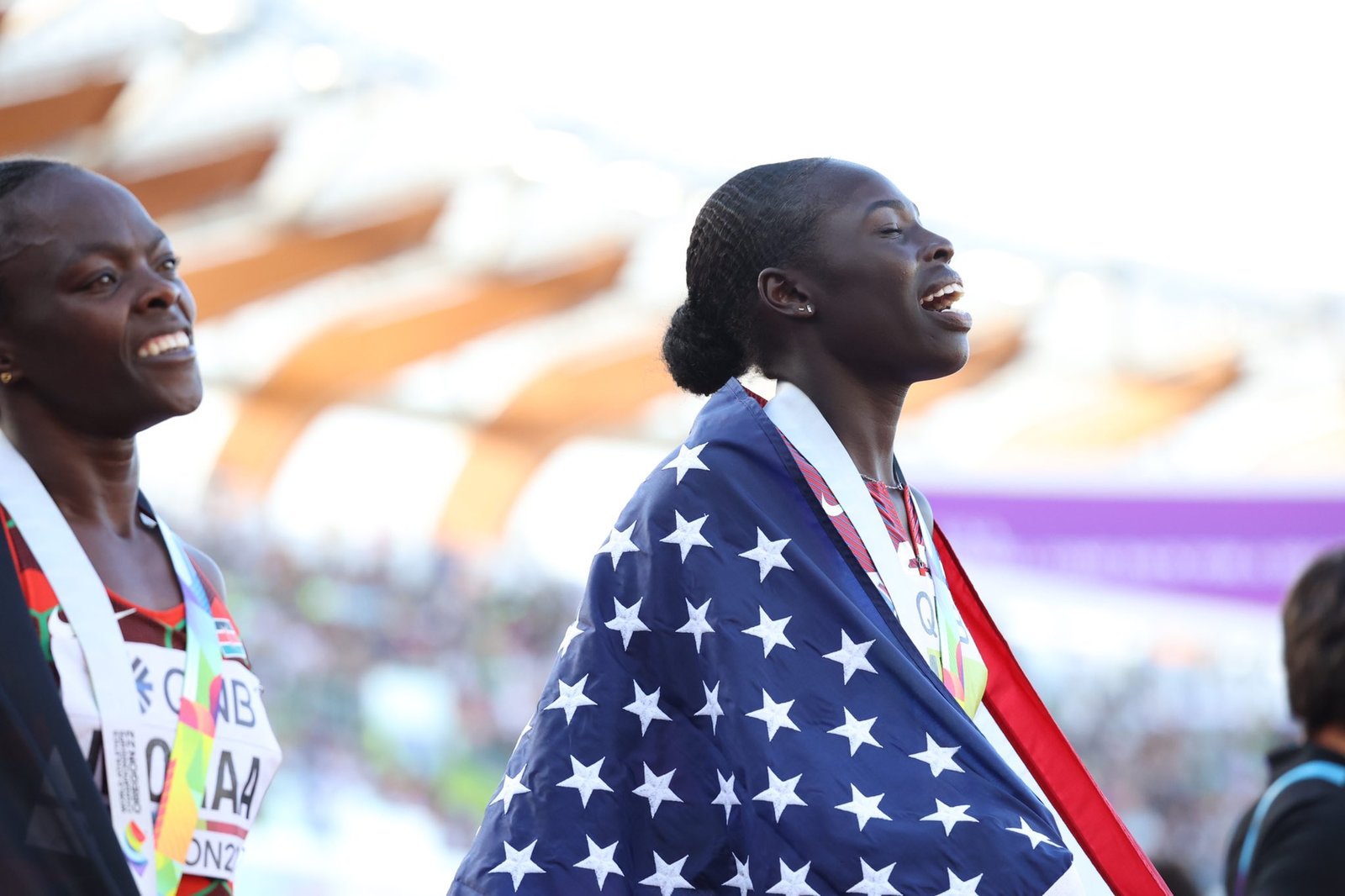 Kenya clinched two medals on the final day of action at the World Athletics Championships in Eugene, Oregon with silver and bronze in the men’s 5,000m and women’s 800m respectively.

The two medals take Kenya’s tally at the Championships to 10, one less than the overall count in Doha 2019. Kenya clinched two gold medals, five silver and three bronze to conclude a tough outing in the USA.

Moraa won her first senior medal with a third-place finish in the women’s 800m, running a new Personal best time of 1:56.71.

“I am really pleased to win a first senior medal. It was not an  easy race but I had to fight and I thank God for what I got today. When you step in a race, you never know what will happen. You just give your best and wait for whatever reward comes your way. I have worked hard in training and worked closely with the coach to improve aspects of my racing,” Moraa said after the win.

Olympic Champion Athing Mu of the USA just but held on for gold in front of the home fans, clocking a world leading time of 1:56.30 ahead of Keely Hodgkinson of Britain who clocked 1:56.38. The duo, both 20years old finished 1-2 as well at last year’s Olympuc Games.

Moraa showed a good final lap sprint, coming beyond fourth at the bell to win a medal and finally make up for her disappointment from the Olympic Games where she finished third in the semis and failed to make the final.

Earlier on, Krop put up a great and spirited performance to clinch silver in the men’s 5,00m behind Norwegian Jakob Ingebrigtsen who added a gold medal to his 1500m silver.

The other Kenyans in the race, Nicholas Kimeli and Daniel Simiu finished seventh and 10th respectively.

“I am delighted to have finished second in the race. It was not easy. We worked well as a team but it was unfortunate we couldn’t take it to the end. What worked for me was self belief. I stepped into the race and told myself that anything is possible and that helped me,” he added.

Olympic champion Joshua Cheptegei of Uganda also fell off the medals, seemingly worn off from his majestic run to win the 10,000m gold earlier on in the competition.

Cheptegei had paid the price of employing a scorching pace early in the race as he took pace making duties for the first three laps of the race.

The Kenyan trio of Krop, Kimeli and Simiu played leaders for most of the race with Kimeli each time signalling the other two to follow in his shadow whenever they started to drift back.

But with two laps to go, the lanky Ingebrigtsen took over the lead and started to inject an increase in pace. At the bell, the Kenyan trio was behind him but Simiu and Kimeli fell off, leaving Krop as the only one to battle for Gold.

At the home stretch though, Ingebrigtsen wheeled away and Krop couldn’t catch him, but did just but enough to secure silver, a first World Championship medal for the 21 year old who has the second fastest time in the distance this season.