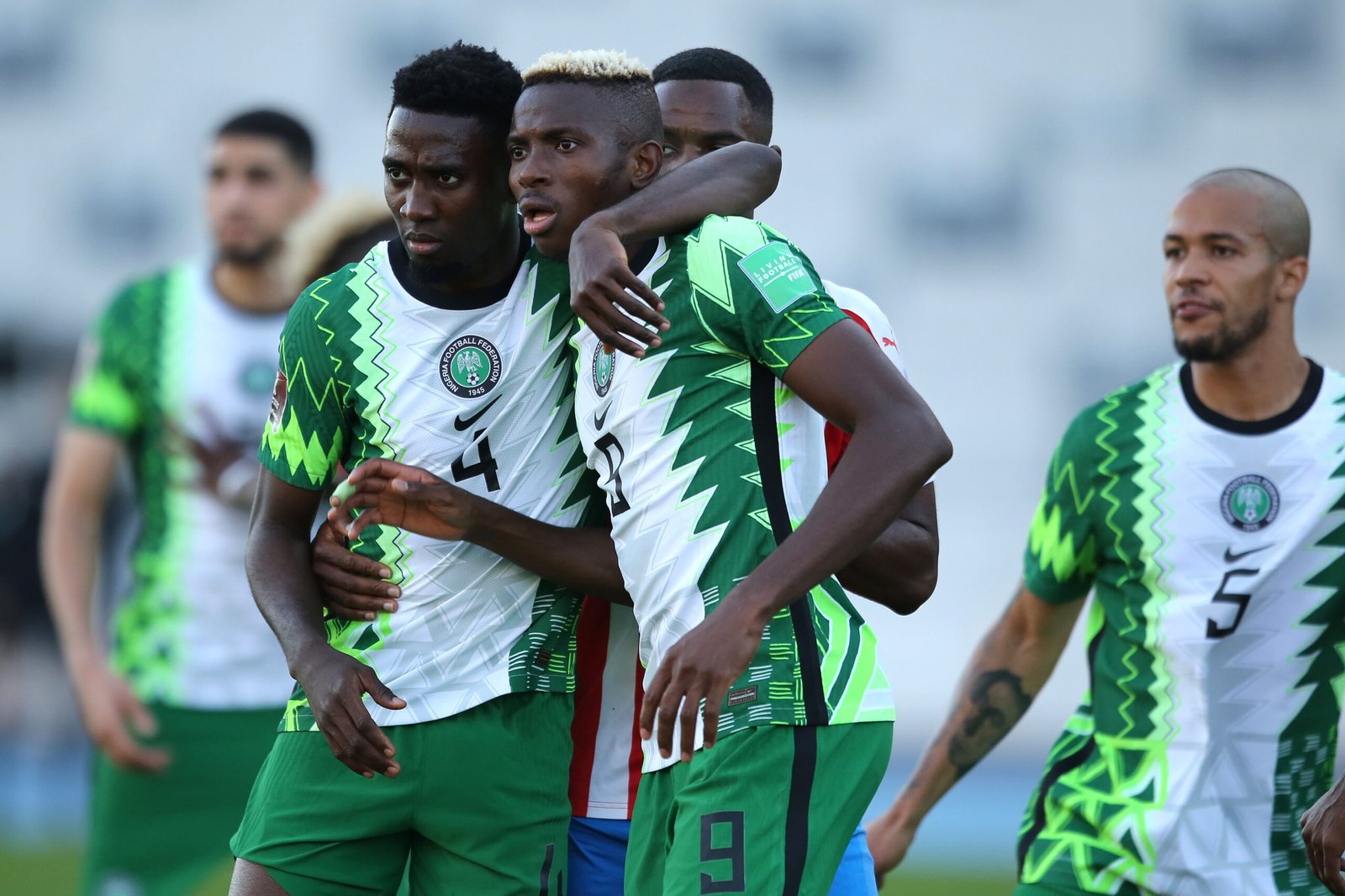 Nigeria recorded their biggest ever victory after thrashing Sao Tome and Principe 10-0 in their second qualification match for the 2023 Africa Cup of nations with Napoli forward Victor Osimhen scoring four goals.

Sao Tome who were reinstated to the qualifiers after winning an appeal against Mauritius were handed a rude awakening as the Super Eagles completely annihilated them in Agadir, Morocco, where they are playing their home matches.

Osimhen who missed the last Cup of Nations due to injury started the party from as early as the ninth minute with a deft header from a Moses Simon cross that beat the reach of the keeper. Nineteen minutes later, the duo reversed roles, this time Osimhen playing Simon through for the second goal.

It came just a few minutes after Osimhen had been denied an opportunity, another cross from the right meeting up with his rising frame but the keeper stopped the header with his feet.

Sao Tome offered some brief spell of resistance as they looked to prevent a whitewash. They managed to hold on until the 43rd minute when Moffi scored the first of his two when he controlled a cross from the right before rifling low into the net.

In the second half Nigeria were in no mood to let off and just three minutes in, Osimhen got his second with a neat finish from an Ademola Lookman cross.

Peter Etebo then made it five in the 55th minute with a well curled in freekick from the edge of the box, beating the keeper and coming off the underside of the bar.

Four minutes later, Moffi made it six with another simple finish, tapping home from close range after Sanusi Zaidu made a good cross from the left. 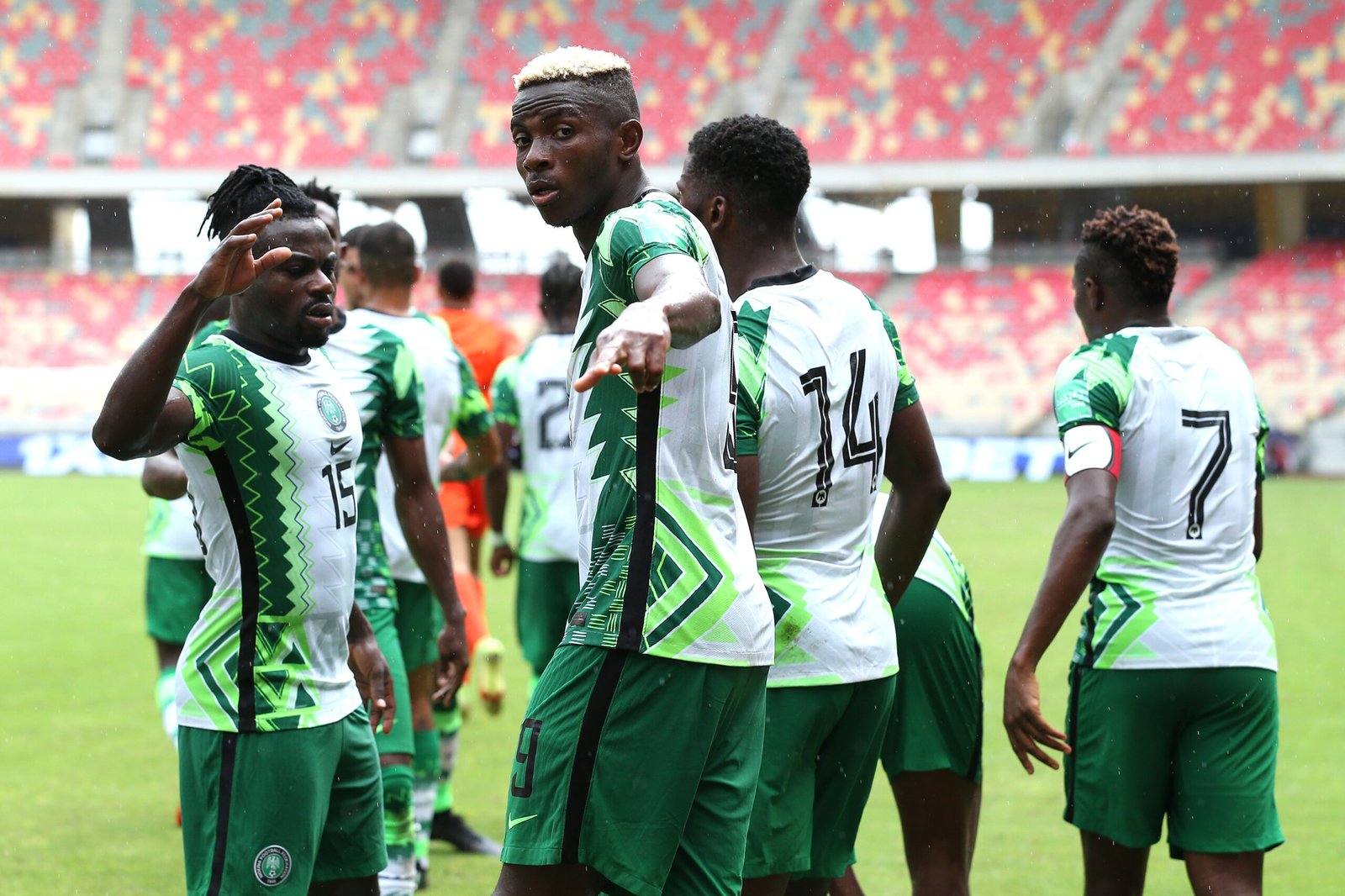 It was seven soon later when Lookman got his name on the scoresheet in the 63rd minute, finishing off from inside the box after Moffi’s initial chipped effort was punched by the keeper.

It was 8-0 two minutes later, Osimhen getting another goal with a neat finish between the keeper’s legs. He waited until the 84th minute to complete his four goals, running behind the defense from an Ahmed Musa pass before chipping over the keeper.

Substitute Emmanuel Dennis completed the double digit score for the Nigerians at the stroke of fulltime when he converted from the penalty spot, taking responsibility after he had been axed inside the box.

The game started off to a lull in the opening half but blew to life in the second period.  The visitors in their own home turf were off to a flier and they moved ahead after 56 minutes when Fajr converted from the penalty spot after Amine Harit’s quick feet inside the box led to a penalty after he was hacked down.

Just two minutes on the turn, En Nesyri made it two goals in two qualification matches with the second goal, a neat finish between the keeper’s legs after being played through by a brilliant Azzedine Ounahi ball into the area.

The score-line was comfortable for the Atlas Lions and the defense marshalled by Achraf Hakimi didn’t have much to worry about as Liberia provided little danger moving forward.

Elsewhere in Conakry, Guinea where Sierra Leone are staging their home matches, they had to endure a difficult start before Augustus Kargbo and Musa Noah Kamara scored in the final 12 minutes of the match to scrape a point for the Leone Stars.

The point puts Sierra Leone on one point after two matches, a worthy response after their opening day 2-1 loss to Nigeria. Guinea Bissau have four points and are second following their opening day 5-1 win over Sao Tome.

The Djurtus would have made it back to back victories after taking a healthy lead in the second half. After a goalless first half, the visitors broke the deadlock three minutes after the restart through their star player Jorginho.

He doubled the tally in the 63rd minute to complete his brace, but they could not hold on as Sierra Leone scored in the 78th and 88th minutes to grab a point.

Remember Man Utd midfielder Park Ji-sung? See what he is currently doing
Top five footballers who have played with both Ronaldo and Messi