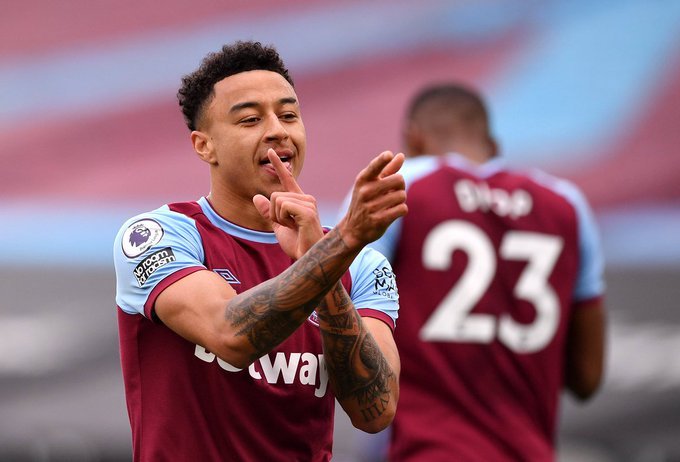 Newcastle United has continued to push hard to bring in Jesse Lingard before the end of the January transfer window, even as the club look elsewhere to reinforce their defence after becoming increasingly frustrated by Sevilla in their attempts to sign centre-back Diego Carlos.

Newcastle is ready to pay a loan fee for Manchester United forward Jesse Lingard as well as the player’s full wages. However, they are still awaiting a final decision from Manchester United, on whether or not they will sanction a move for Lingard in this window set to end on January 31. The 29-year-old has no intention of remaining at Old Trafford this season; therefore he can leave for free in the summer. Lingard is desperate to play football and would welcome the opportunity to speak to Newcastle, as he weighs up his options.

However, Newcastle has eyes elsewhere for defensive reinforcements after becoming increasingly frustrated by Sevilla in their attempts to sign centre-back Diego Carlos. It is thought Newcastle were initially informed the player would be available for around €30m, however, the Spanish club have increased the asking price numerous times. Newcastle has made bids for certain targets in recent weeks, most notably centre-back pair Diego Carlos at Sevilla and Sven Botman at Lille. However, in both instances, the price of the players kept inflating until the club felt they had to walk away. The club’s priority is to survive relegation this season and then have the maximum financial power to attack the summer window. 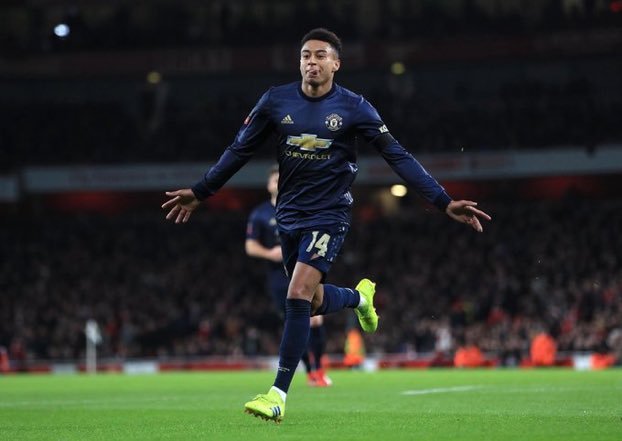 Jesse Lingard in a past match at Old Trafford, via Getty Images

If they overspend now it could potentially hinder them from approaching bigger targets ahead of next season. Jesse Lingard was first included in a senior matchday squad on 30 November 2011, in the League Cup quarter-finals against Crystal Palace at Old Trafford, remaining unused as Sir Alex Ferguson’s team lost 2–1 after extra time. He had his only other call-up of the season on 4 January 2012, again unused in a 3–0 away Premier League loss to Newcastle United. On 6 November 2012, the winger and teammate Michael Keane joined Leicester City on loan for a month. He made his competitive debut later that day, in a 0–0 Championship draw away to Bolton Wanderers, coming on as a substitute for Martyn Waghorn in the 85th minute.

His loan was later extended to 2 January 2013, and he totalled five appearances for the Foxes. Lingard was then selected in the 19-man squad for Manchester United’s 2013 pre-season tour and managed to score his first two goals for United in a 5–1 friendly win against the A-League All-Stars in Sydney on 20 July, the first of which was the club’s first goal under new manager David Moyes. Although he had hoped to “skip the loan stage this time and break straight through” at Manchester United, Lingard joined Birmingham City on a month’s loan on 19 September and went straight into the starting eleven for the Championship match against Sheffield Wednesday at St Andrew’s two days later.

He opened the scoring after 20 minutes with his first goal in senior football when goalkeeper Chris Kirkland parried Chris Burke’s shot, completed his hat-trick 13 minutes later, and scored a fourth in the second half to secure a 4–1 win. The 29-year old was unavailable for Birmingham’s League Cup third-round tie because Manchester United did not want him cup-tied, then in his third league match, he made up for missing a penalty, awarded when he has fouled apparently outside the area, with an 89th-minute header to complete a 4–0 defeat of Millwall. An agreement was reached to extend Lingard’s loan until 14 December, but he then missed three matches while receiving treatment at Manchester United for a knee injury. 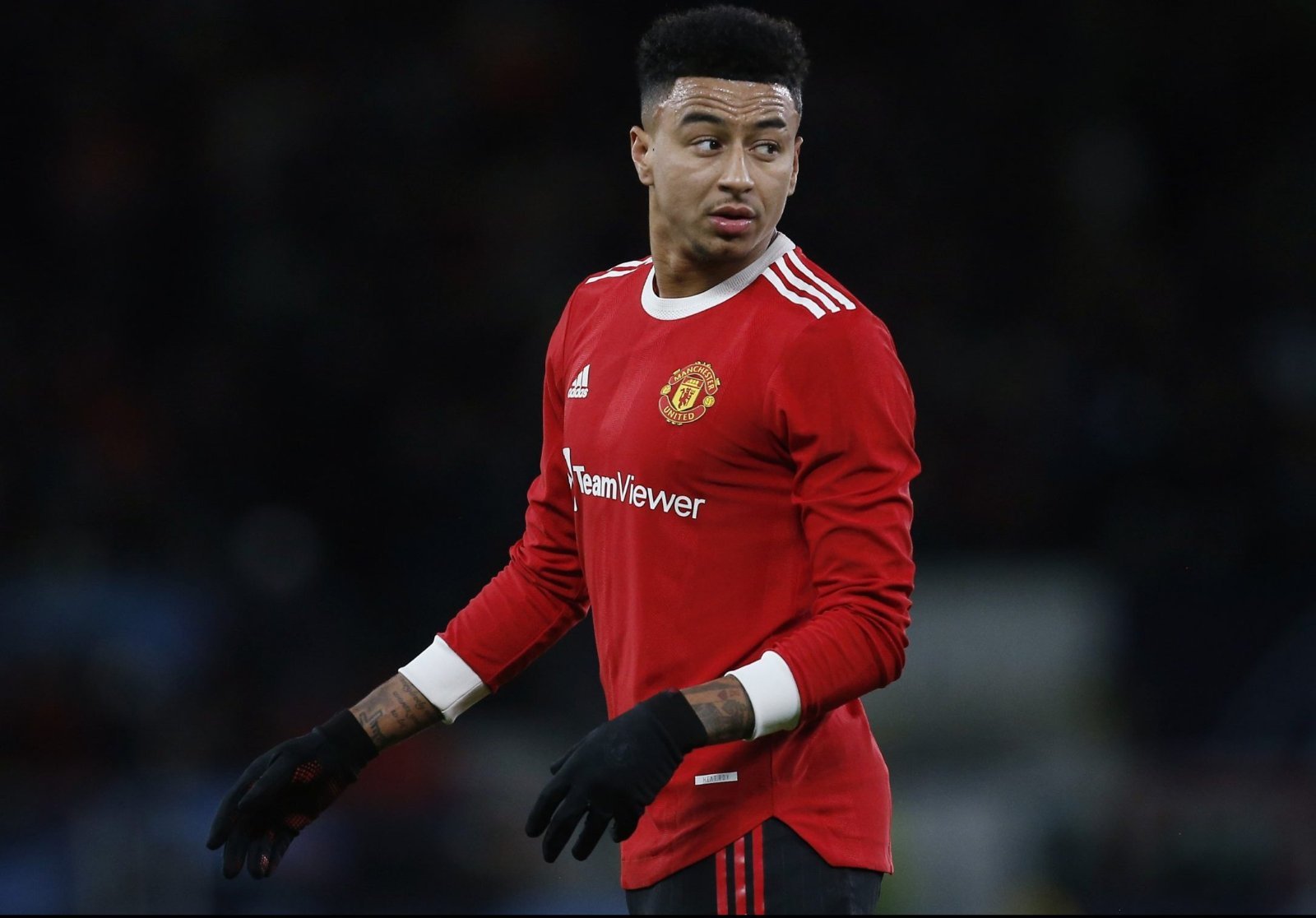 The loan was further extended, to 1 January 2014, but he was suspended for the last two matches of the spell. He was sent off during a match against Wigan Athletic on 26 December for a lunge on Jordi Gómez immediately after being refused a free-kick when he appeared to be fouled. Although Birmingham hoped to extend the loan, Lingard returned to Manchester United and was an unused substitute in the match against Swansea City on 11 January. On 27 February 2014, the attacking midfielder joined another Championship club, Brighton & Hove Albion, on a 93-day loan. He scored his first goal for the club on 8 April, in a 4–1 win against former club Leicester City, who had sealed promotion to the Premier League days earlier.

While with Albion, Lingard played 17 times, including in the Championship play-offs, and scored 4 goals. On 4 August 2014, Lingard came off the bench to score the third goal in United’s 3–1 International Champions Cup Final win over Liverpool. He made his competitive debut for the club in the first match of the 2014–15 Premier League season at home to Swansea City, starting the match but was replaced by Adnan Januzaj because of injury after 24 minutes. Swansea won 2–1 in Louis van Gaal’s first competitive match as United manager. On 2 February 2015, Lingard joined Championship club Derby County on loan until the end of the season.

He made his first start on 14 February, against Reading in the FA Cup.nOn 7 November 2015, he scored his first senior goal for Manchester United in a 2–0 win against West Bromwich Albion at Old Trafford, opening the scoring with a shot past Boaz Myhill from outside the penalty area. On 12 January 2016, he scored against Newcastle United in a 3–3 draw at St James’ Park, with a finish that went between the legs of the goalkeeper after a reverse assist from Wayne Rooney. He added his third goal of the season on 2 February against Stoke City in a 3–0 victory with a closer range diving header from a cross by Cameron Borthwick- Jackson. 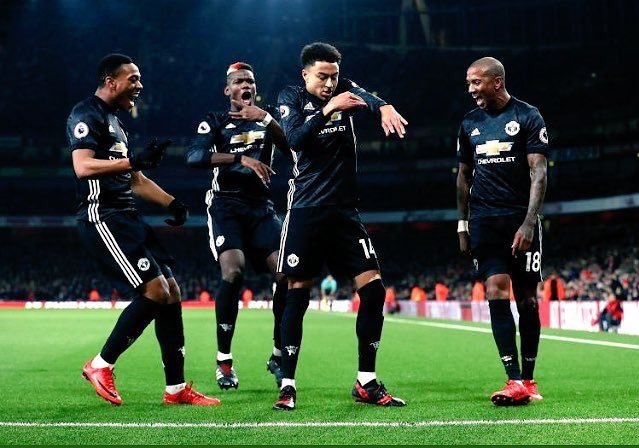 United players celebrate victory in a past match via Getty Images

On 7 February 2016, Lingard scored his fourth goal of the season in a 1–1 draw against Chelsea at Stamford Bridge, breaking the deadlock with a spin and shot inside the penalty area. On 21 May 2016, he scored the winning goal for Manchester United in the 2016 FA Cup Final against Crystal Palace, having come on as a second-half substitute for another goalscorer Juan Mata. The English international scored the opening goal as Manchester United beat Premier League champions Leicester City 2–1 to win 2016, FA Community Shield.

Lingard scored another important goal in February 2017, this time United’s second of a 3–2 win over Southampton in the 2017 EFL Cup Final. On 6 April 2017, he signed a new contract with Manchester United, of four years with an option for a fifth. On 5 December 2018, Jesse he scored his first domestic goal of the season in a 2–2 draw against Arsenal. Two weeks later, in the North-West derby, Lingard scored his second of the season in a 3–1 loss to Liverpool. During United’s first game under new interim manager Ole Gunnar Solskjær, the English international doubled his season’s tally, scoring a penalty and a goal from open play in United’s 5–1 win over Cardiff City, in addition to an assist for Anthony Martial.

On 25 January 2019, Lingard scored the second goal in a 3–1 win over Arsenal in the fourth round of the FA Cup. On 26 July 2020, he scored his first goal in the final matchday of the Premier League; his first since December 2018 in the 98th minute to seal a 2–0 win at Leicester City. His goal secured qualification for the 2020–21 UEFA Champions League and was the final goal of the 2019–20 Premier League campaign. On 29 January 2021, the English international moved to West Ham United on loan until the end of the season, where he reunited with former Manchester United boss David Moyes. On his debut on 3 February 2021, Lingard scored two goals against Aston Villa as West Ham won 3–1. 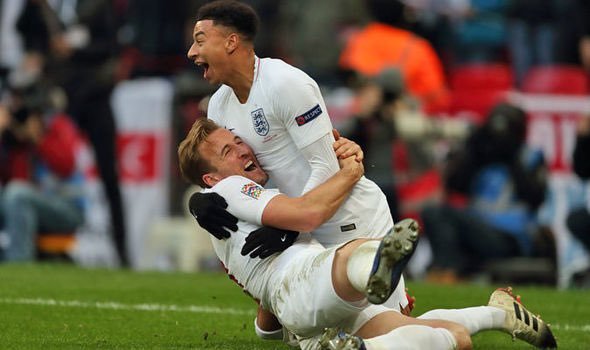 During the match against Wolves on 5 April, Lingard carried the ball 52 metres before firing past Rui Patrício, the furthest a player had travelled with the ball before scoring in the Premier League during the season. He continued his good form during his loan spell, contributing nine goals and four assists in his first 10 Premier League games for West Ham. His ninth goal was scored from the penalty spot in the club’s 2–3 defeat at Newcastle United on 17 April. The goal meant he had scored more Premier League goals for West Ham than he ever managed in a single season at Manchester United.