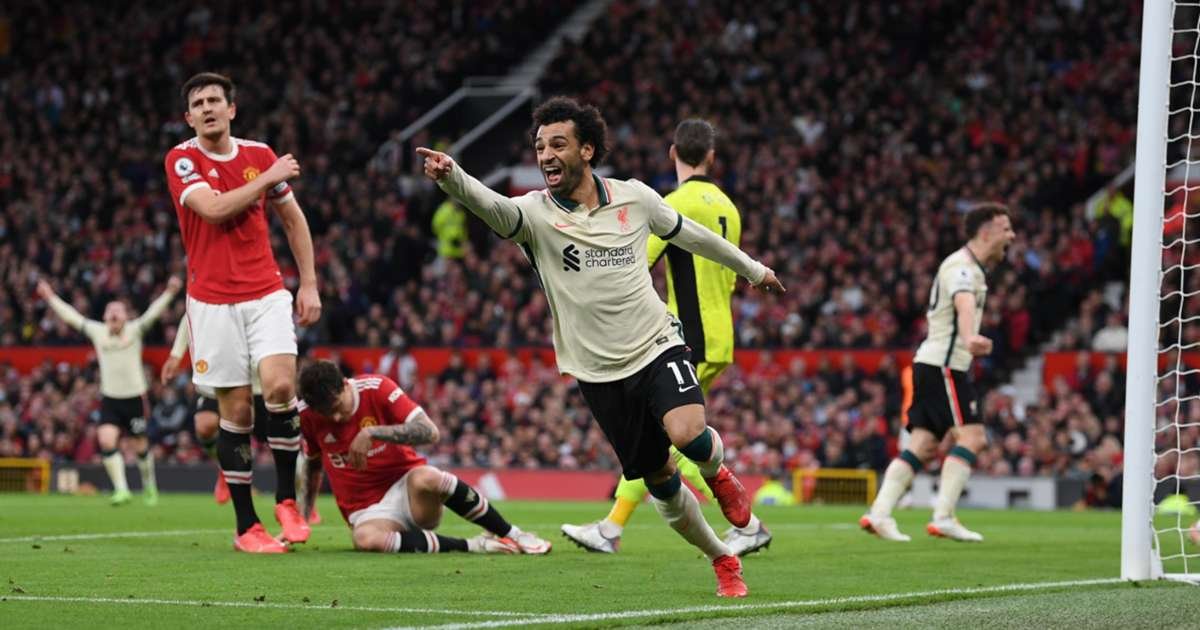 Manchester United were swept away as they went in at half-time four goals down for the first time in a Premier League game, making it all too easy for the Reds as Naby Keita and Diogo Jota were on target before Salah struck twice.

The impressive Salah completed his hat-trick early in the second half, taking his goal tally for the season to 15 before substitute Pogba was dismissed for a poor challenge on Liverpool midfielder Naby Keita.

Salah, who took the match ball home has now scored in 10 consecutive games in all competitions and Liverpool are unbeaten in 21 matches, while United is in after the most chastening of defeats in their own backyard.

Keita silenced the United fanbase when he capitalized on poor defending to slide beyond David de Gea with his right foot after being slipped in by Salah.

That strike in the fifth minute was the Reds’ earliest at Old Trafford in the Premier League and they did not have long to wait for a second, Trent Alexander-Arnold’s cross giving Jota a tap-in after a mix-up between Harry Maguire and Luke Shaw.

Liverpool, already without the injured Fabinho, lost James Milner midway through the first half and was replaced by youngster Curtis Jones but Salah put them out of sight with a double before the break after Alisson had denied Mason Greenwood on the other end.

The dreadful Red Devils were all over the place and ruthless Egypt forward made them pay, finishing with his right foot when he was picked out by Keita and tucking home with his left from close range just before a half-time whistle that was greeted with loud boos.

Salah completed his hat-trick in the 50th minute, racing onto Jordan Henderson’s pass before beating De Gea with a clinical left-foot finish shortly after Cristiano Ronaldo had a goal ruled out for offside.

United’s day took yet another turn for the worse when Pogba was dismissed for a reckless challenge on Keita following a VAR check, having initially been shown a yellow card on the hour mark.

Keita was unable to continue and the United players look like they would rather not, as only a brilliant save from De Gea prevented Alexander-Arnold from adding a sixth.

Fellow full-back Andrew Robertson’s block sent the ball crashing against the crossbar late on to prevent Edinson Cavani from finding the back of the net and there were inevitably more boos at the final whistle to end a totally one-sided contest.

Solskjaer has had some difficult days during his United tenure but sunk to a new low as his side suffered an embarrassing Premier League Sunday.

The Red Devils gifted Liverpool, who could have moved up another couple of gears if needed, control and looked like a team of strangers, slumping to an embarrassing defeat that leaves them seventh in the Premier League – seven points behind their second-placed opponents.

Liverpool were ruthless as they toyed with United, stretching their unbeaten run in the top flight to 19 games to remain the only side not to have lost this season.

Salah is arguably the best player in the Premier League at the moment and he took full advantage of United’s huge shortcomings, becoming the leading African goalscorer in Premier League history when he took his astonishing tally to 104 surpassing Chelsea and Ivory Coast great Diddier Drogba.

Salah is also the first player in history to score at United in three successive Liverpool visits, while he is the second in the club’s history to find the net in their first five away league matches of a season – joining Sam Raybould, who did so in five during 1902-03.

Manchester United will seek to bounce back when they travel to London to take on Tottenham next Saturday. Liverpool takes on Preston North End in the EFL Cup on Wednesday, then meets Brighton and Hove Albion at Anfield next weekend.