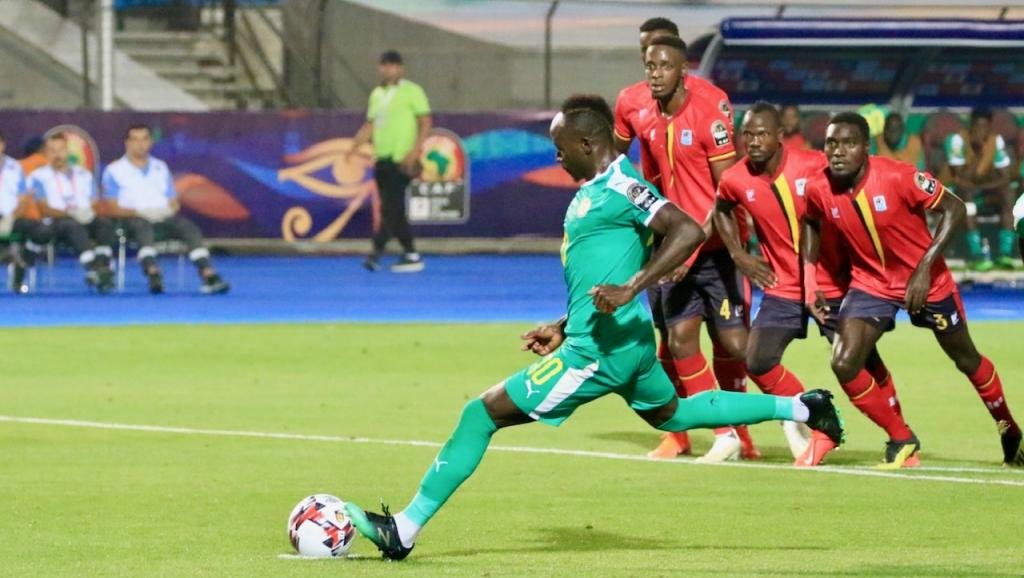 Nigeria managed their second Group C win in as many matches, when they came from behind to down hosts Cape Verde 2-1 in Mindelo.

Dylan Tavares put the hosts ahead after 19 minutes, but only for Victor Osimhen to find the equalizer ten minutes later. A bizarre own goal from Kenny Rocha Santos 14 minutes from time gifted Nigeria a vital away win.

Despite seeing the hosts having most of the possession at the opening minutes, the first chance fell to Nigeria, when skipper Ahmed Musa received a cross inside the area, but his shot went high after five minutes.

But it was Cape Verde who opened the scoring after 19 minutes. A long pass from their own half found Dylan Tavares who sent a first time shot with his left foot behind Maduka Okoye to give the Blue Sharks the lead.

Cape Verde goalkeeper Vezinha was alert to stop Chidera Ejuke effort from the edge of the area after 27 minutes, with the Super Eagles trying to find the equalizer before the break.

And they got what they wanted a couple of minutes later. Defender Kelvin Pires tried to clear a cross from Jamilu Collins, but was about to score in his own net but for Vezinha save. The rebound ball found Victor Osimhen who scored easily to restore parity for Nigeria.

Vezinha once again was the hero for Cape Verde just before halftime. Musa’s corner caused a scramble inside the area, and Cape Verde goalkeeper saved Osimhen tap from three yards away, as the first half ended 1-1.

After the break, Nigeria enjoyed more possession but without posing a real threat to their hosts, who sat back depending on counter attacks.

They came closest after 73 minutes when substitute Henry Onyekuru shot from the edge of the area was safely handled by Vezinha.

But the visitors took the lead after 76 minutes in a bizarre way. From 30 meters away, Kenny Rocha Santos tried to pass the ball back to his goalkeeper, but it was a high pass that wronged Vezinha and crossed the goal line to give Nigeria the lead.

Substitute Vagner Dias could have saved a point for Cape Verde two minutes from time, but his header from a close range went just wide, as Nigeria held to their win to reach maximum points.

Nigeria leads Group C on 6 points, 3 more than Liberia. Cape Verde and Central African Republic have a point each.

Meanwhile in Malabo, Equatorial Guinea had their first Group B win of the campaign, defeating Mauritania 1-0.

Iban Salvador scored what proved to be the game’s lone goal at the hour mark, as Nzalang Nacional recovered from their matchday 1 defeat in Tunisia.

Equatorial Guinea have 3 points in third place, on goal difference from second place Zambia. Tunisia lead the group on six points, while Mauritania remain in the bottom with no points.

Senegal now lead the group H with 6 points, followed by Namibia on 4 points. Congo follow with a single point while Togo trail pointless.

At home, the Red Devils had one thing at stake, to avoid defeat and stay in the race for qualification. For this, Paul Put made five changes to his previous lineup that had a 1-1 draw in Namibia last weekend.

Against all expectations, Senegal goalkeeper Edouard Mendy was the first to make a save in the opening half. Chelsea goalkeeper stopped Dylan Saint-Louis effort in the 8th minute.

Senegal returned to the game, and Boulaye Dia opened the scoring in the 27th minute with a through pass from Kalidou Koulibaly.

Ismaila Saar and Sadio Mané came close to doubling Senegal lead. But against the run of play, in the first half injury time, Prestige Mboungou was fouled inside the area as the hosts were awarded a penalty. Sylvère Ganvoula made no mistake as the first half ended 1-1.

After the break, Ndockyt tried to deceive Mendy with a curled shot, but the ball went just out to the Senegalese relief.

Congo lost the match in four minutes. Ismaila Sarr put Senegal ahead in the 83rd after a pass from Mané from the left. And then, Senegal were awarded a penalty, converted by Mané in the 87th minute after he was fouled in the box.

Elsewhere, the reigning African champions Algeria stretched their unbeaten run after picking upa pointaway from home in the qualifiers for the Qatar 2022 FIFA World Cup with a 1-1 draw against Burkina Faso on Tuesday

The Algerians came into the match with heaps of confidence after their opening day 8-0 thrashing of Djibouti and wanted to pick a successive win to get themselves squarely on the driver’s seat. 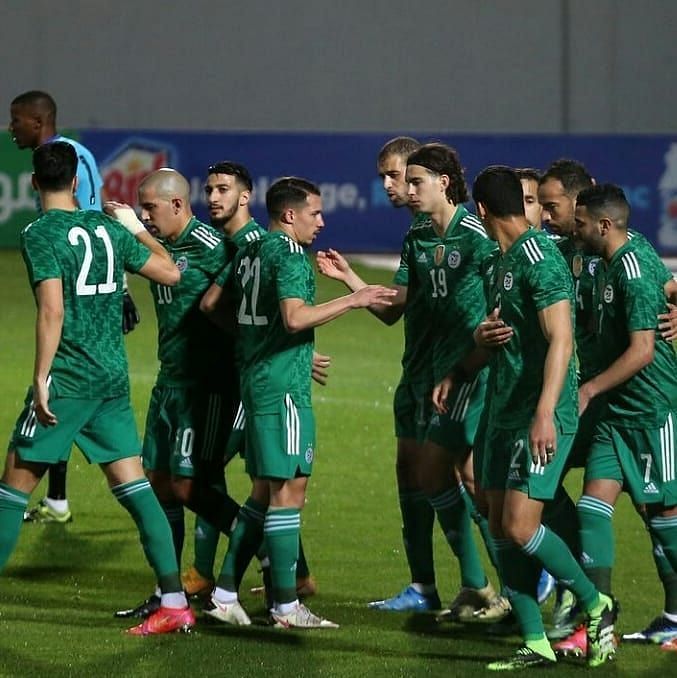 They threatened early in the 10th minute when Riyad Mahrez’s teasing cross from the right evaded the target by inches with Islam Silimani arriving a few seconds late to try make a touch on goal.

But The Desert Foxes got themselves ahead after 17 minutes in sublime fashion. Youce Belaili won the ball deep in his team’s own half before sending Silimani through on the right with a peach of a pass. The forward then cut back a cross into the box which Soufiane Feghouli tapped into an empty net.

They should have been 2-0 up seven minutes later, but Rami Bensebaini’s point blank header from a Mahrez freekick was well saved by the keeper.

The Burkinabe were not taking the early trail hands behind their backs and they equally gave in a good performance. They had a chance in the 28th minute when Issa Kabore drifted into the box from the right, but he dragged his shot straight to the keeper.

On the half hour mark, Algeria had a brilliant chance. Another precise pass from Belaili fell on Slimani who did well to sit one defender down, but his shot at goal from a tight angle was blocked by the keeper.

In the second half, Burkina Faso came with more speed and precision. They were patient in attack and that ultimately paid off after 64 minutes when Abdoul Tapsoba drew them level. A long ball started by the keeper landed on Lassina Traore who dragged a cross into the box.

Algeria should have retaken the lead off a counter in the 72nd minute when they defended a corner well.

Mahrez picked the ball at the edge of the six yard box and checked on substitute Baghdad Bounedjah’s run, but the ball clipped the latter’s heels when he was through on goal.

The home side attempted to increase the pressure on the North Africans, but their efforts came to nothing.

Algeria tops Group A on four points, on goal difference to Burkina Faso. Niger (3 points) and Djibouti (0) follow in that order.

Elsewhere in Khartoum, Guinea Bissau earned themselves a massive 4-2 victory against hosts Sudan while in Luanda, Libya won 1-0 away to Angola.

In Omdurman, Guinea Bissau’s Djurtus went top of Group I with an assured 4-2 victory over host nation Sudan. Piqueti scored a brace while Frederic Mendy and Mama Balde grabbed one each in the healthy win.

Guinea Bissau went 1-0 up after only eight minutes when Piqueti picked the ball at the edge of the box, drove in and shot low past the keeper. 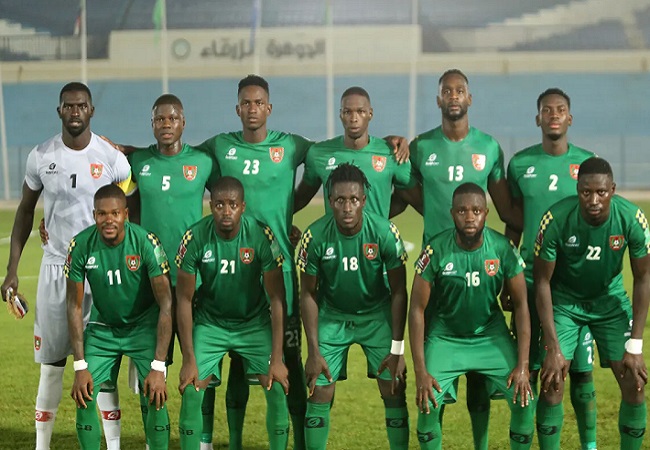 Piqueti was to be included in the second goal as well when he brought in a cross from the right. Skipper Mendes Jonas miscued his shot before leaving space for Mendy to score as they went to the break with a 2-0 lead.

The tempo was raised and the Djurtus went 3-0 up with Piqueti completing his brace with a smart low shot into the bottom left after Moreto Cassama had played a good dummy to take away one defender and give his teammate space to kill off the game.

In the second half, Sudan got themselves into the game through Mohamed Abdel Rahman. The Sudanese had turned over possession and made it count, giving themselves a slight belief of a comeback just 10 minutes after the restart

But all their efforts to climb the massive mountain came to nothing and it was Guinea Bissau who would add a goal with eight minutes left, Balde powering a header home off a well weighted corner.

Guinea Bissau moved to top of Group I on four points, one more than Morocco. Guinea has one while Sudan trail pointless. Guinea – Morocco game was postponed due to the continuing unrest in the  country.

Elsewhere in Luanda, Libya defeated Angola 1-0 away from home to go on top of Group F on maximum points.

Omar Al Khoja scored what proved to be the game’s lone goal in the first half, as The Mediterranean Knights continued their dream start to their qualifiers’ campaign. Libya leads the group on 6 points, two more than North African neighbors Egypt. Gabon follows with a lone point, while Angola trails having lost two games out of two.

Both Tanzania and Benin have earned four points from two matches as the four Group J teams are battling to qualify for 2022 World Cup ticket.

Finally at the Levy Mwanawasa Stadium in Ndola, Tunisia also opened a three-point lead in Group B after defeating Zambia 2-0 with Wahbi Khazri and Anis Ben Slimane scoring.