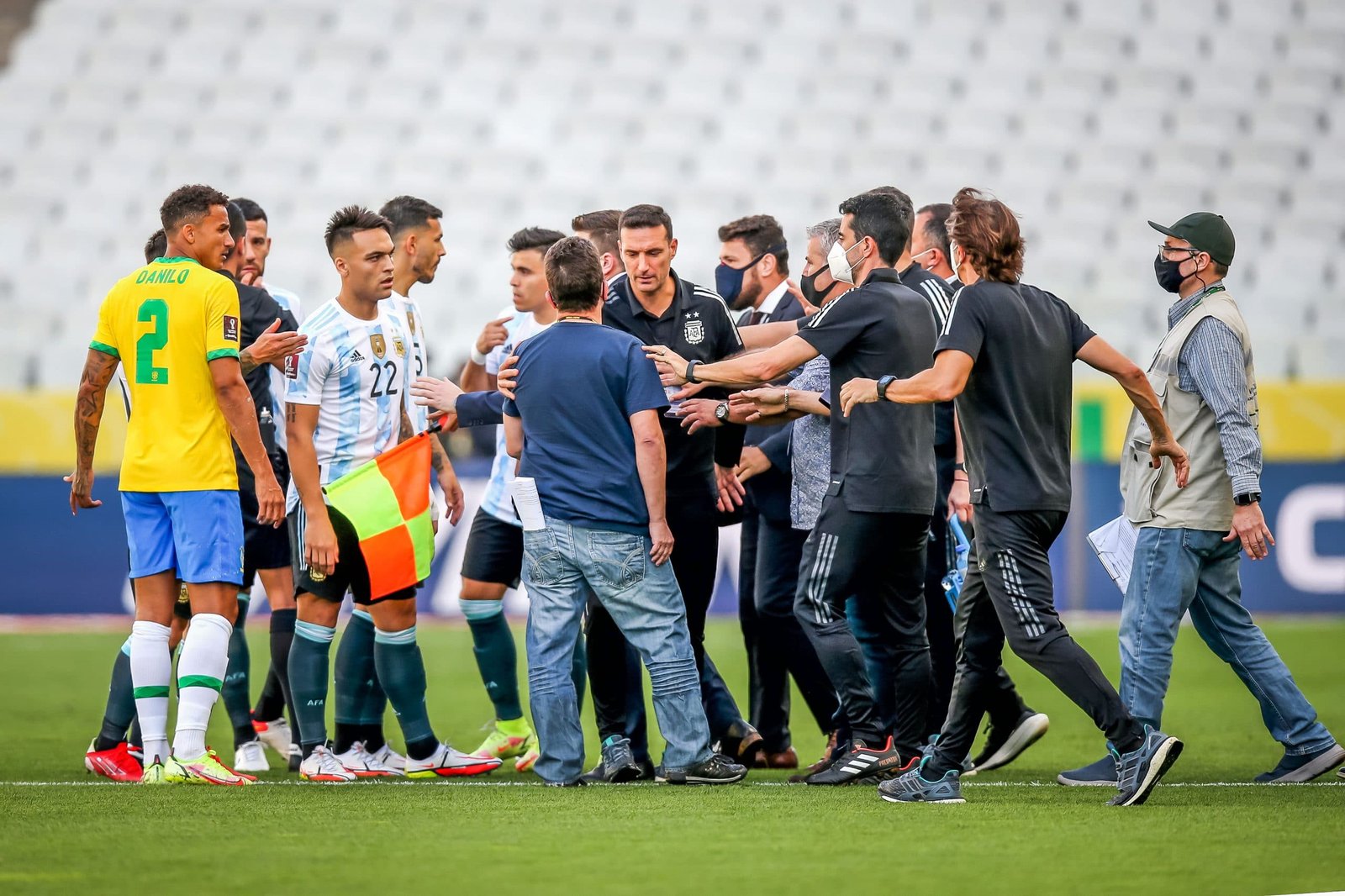 The biggest story on Sunday was undoubtedly in South America where there was absolute chaos during the Brazil versus Argentina World Cup qualifier.

The two teams kicked off the game at the Neo Quimica Arena but, after five minutes, public health officials stormed onto the pitch in order to deport four Argentine players who allegedly broke Covid-19 protocols. 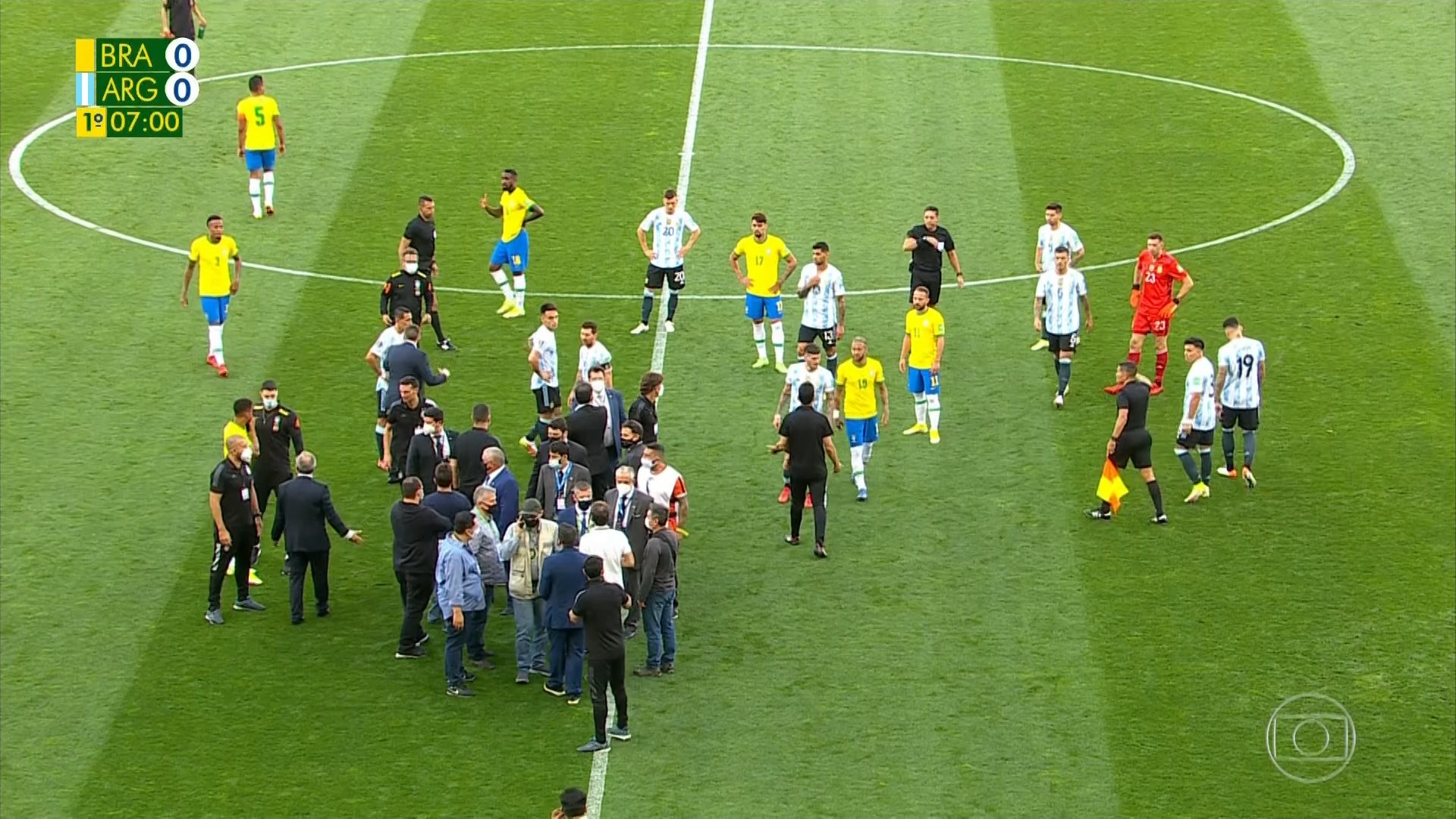 The players in question were English-based stars Emiliano Martinez, Giovani Lo Celso and Cristian Romero, who it is alleged lied about their travel and quarantine in South America in the wake of the Coronavirus pandemic.

The match was thus postponed until further notice.

Brazil versus Argentina was not the only World Cup qualifier to be postponed amidst dramatic circumstances as an armed coup in Guinea led to the postponement of the nation’s game against Morocco.

The match was due to be played in the capital of Conakry on Monday but on Sunday morning an armed group announced it had overthrown the government and taken the president Alpha Conde hostage.

It is not clear yet whether the game will be rearranged in Morocco instead.

Italy set a new world record unbeaten run with their 0-0 draw in Switzerland on Sunday.

That result means that the Azzurri have gone 36 games unbeaten, overtaking Brazil (1993-1996) and Spain (2007-2009) as the the occupiers of the longest undefeated streak in international football history.

Italy have not lost a game since September 2018 to Portugal in a Nations League game.

Jesse Lingard scored twice and assisted one for England on Sunday in yet another reminder of how he is wasting away at Manchester United.

Lingard broke the deadlock against Andorra in a 2022 World Cup qualifier at Wembley with a left-footed strike after 18 minutes.

The attacking midfielder then fired home from just outside the area into the bottom corner on 78 minutes to make it 3-0 for England.

The home side eventually won the match 4-0 with Harry Kane (from the penalty spot) and Bukayo Saka also finding the net. Lingard made the goal for Saka.

There was no doubt who the star of the show was as Lingard showed his club manager Ole Gunnar Solskjaer just how much he is being wasted at Man Utd.

Lingard has played just four minutes of club football so far this season, coming on as a late substitute in the 1-1 draw with Southampton.

Of course, in the first half of 2020-21, Lingard did not even receive a single minute of Premier League action from Solskjaer

Lingard has played just four minutes for Man Utd this season but this was his 11th goal in 17 competitive starts for club and country this calendar year.

Elsewhere, super-agent Federico Pastorello stressed that it is not true that Antonio Conte has signed a pre-agreement to replace Mikel Arteta as Arsenal manager.

Elsewhere, Julen Lopetegui might be one of the only people involved in the Jules Kounde transfer saga who was left happy with the end result, which was that Chelsea didn’t sign the Centre-back.

It had been expected that Kounde would move to the European champions, but Sevilla held out for the value of the player’s release clause, which was $94,9m equivalent to €80m, and the Blues weren’t willing to go that high.

Reports in the hours following deadline day claimed that the player himself was furious, as he thought he’d already played his last game for Sevilla by not travelling with the team for their most recent La Liga fixture away at Elche.

There was discontent at Chelsea too over the way the negotiations – or lack of them had developed. Sevilla sporting director Monchi will be glad to keep a talented player, but he may have expected a top club to have triggered the $94,9m clause this summer.

So, the happiest of all is Lopetegui, the coach who’ll be able to pick Kounde for his starting line-ups in 2021/22. Speaking to the Diario De Sevilla, Lopetegui has discussed the Kounde transfer saga and outlined why the player is remaining in Andalusia.

“Kounde ended up staying because the club decided that this was the correct thing to do, based on the value of the offers that were there,” Lopetegui told the local newspaper.

“For me, as the coach, it’s positive that Kounde is staying. Without a doubt. Strong squads are built by having players in all the positions and it’s great to have him there, with the way he has already grown over these past two years. We are confident that he’ll continue to grow with us and keep performing, which is the most important thing.”