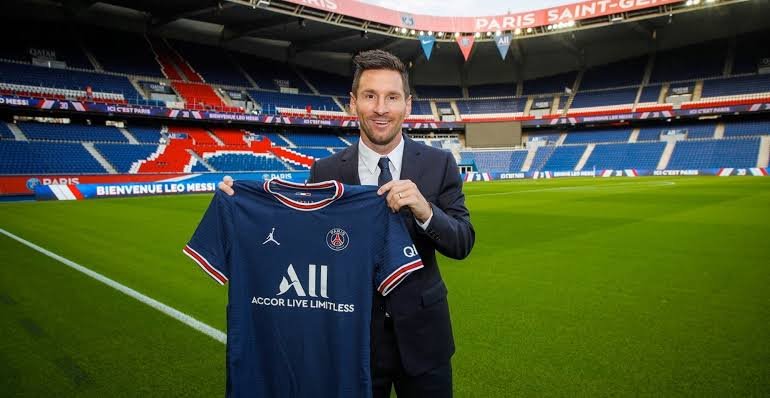 Pochettino: Messi debut will not be rushed, Ramos out until September

Barely five days after Messi Lionel Messi joined Paris Saint Germain on a free transfer, questions still linger on whether he will play this weekend or not with PSG taking on Strasbourg at home.

Fellow Argentine head coach Maurizio Pochettino has suggested Messi is likely not to feature this weekend as he will be given more time to regain his fitness following his busy summer with Argentina, where he helped his country to COPA America triumph.

The Argentine penned an initial two-year deal with PSG after ending his 21-year stay with boy hood club Barcelona after financial problems barred him from playing with Barcelona anytime. 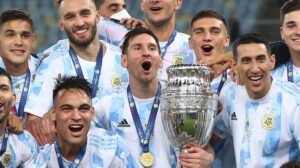 Since joining PSG, Messi has had just two training session with his new club and has not played since the 120 minutes he played for Argentina in the COPA America finals on July 10 against Brazil.

PSG host Strasbourg at the Parc des Princes in their second Ligue 1 game of the campaign on Saturday, but Pochettino is not prepared to risk using Messi too soon.

“Today was his second training session since the Copa America final,” Pochettino said at a pre-match news conference on Friday. “The priority for him is to feel better and better.

“Only then will we see if he is ready to play matches.”

Messi departed Barcelona having scored 672 goals and assisted 265 more in 778 appearances for the cash-strapped Catalan giants across a 17-season stay in the first team.

The 34-year-old’s arrival in the French capital has understandably dominated the headlines and Pochettino is just as excited as the PSG supporters with the high-profile signing.

“We share the same feelings that the fans are experiencing, a great positive energy,” he said. “Every coach in the world wants to have the best players.

“It’s nice to have a roster of excellent players here to increase competition and help us achieve our targets.”

Questions have been raised as to whether PSG can keep the likes of Messi, Neymar and Kylian Mbappe on their books without breaching financial fair play regulations. 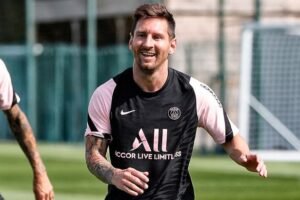 Mbappe is into the final year of his deal and has been linked with a move to Real Madrid, but Pochettino reiterated the club’s stance that the World Cup winner is not going anywhere.

“He is one of our players and will continue to be our player,” Pochettino said. “Our president has already said so and this is what counts.”

Messi is not the only big name to join PSG in this window, with Sergio Ramos also signing on a free alongside Gianluigi Donnarumma, Georginio Wijnaldum and Achraf Hakimi.

However, ex-Real Madrid captain Ramos has yet to play for his new club due to a calf problem that will keep him out of action until after September’s international break.

PSG provided the latest update on Ramos’ fitness on their official website on Friday, while also confirming full-back Juan Bernat is back in full training.

Asked if integrating the former captains of rivals of Barcelona and Madrid into the same side will be a challenge, Pochettino replied: “They will be like brothers in a PSG shirt.

“It has been like the Big Brother house here this week with all the attention. But Leo has a great relationship with everyone and has had a good welcome.”

The influx of more superstar players has only increased the pressure on Pochettino to reclaim the Ligue 1 title and win a first Champions League, a challenge that he is up for.

“It’s no more or less responsibility than in other projects I’ve had at Espanyol, Southampton and Tottenham,” Pochettino said.

“The responsibility here is to win games. If you don’t, you’re in trouble. The challenge is to make sure the stars that shine on their own can work well as a team.”

PSG kicked off their Ligue 1 campaign with a 2-1 comeback win at Troyes last week.

The Parisiens are unbeaten in their 30 Ligue 1 home games against this weekend opponents Strasbourg winning 27 and drawing 3, a French top-flight record for one team at home to a specific opponent.

Despite being termed as the best club in the summer signings, PSG head coach Pochettino is still unsure of how he will line up on Saturday with numerous players having fitness issues.

“Let’s take it slowly. There are still things to be resolved in terms of who will play. That’s something we will establish later,” he said.

“The priority tomorrow is to win the game. We need to find the right balance between concentration and the general excitement that has surrounded the club for a few days.” Said Pochettino.

Pochettino: Messi debut will not be rushed, Ramos out until September