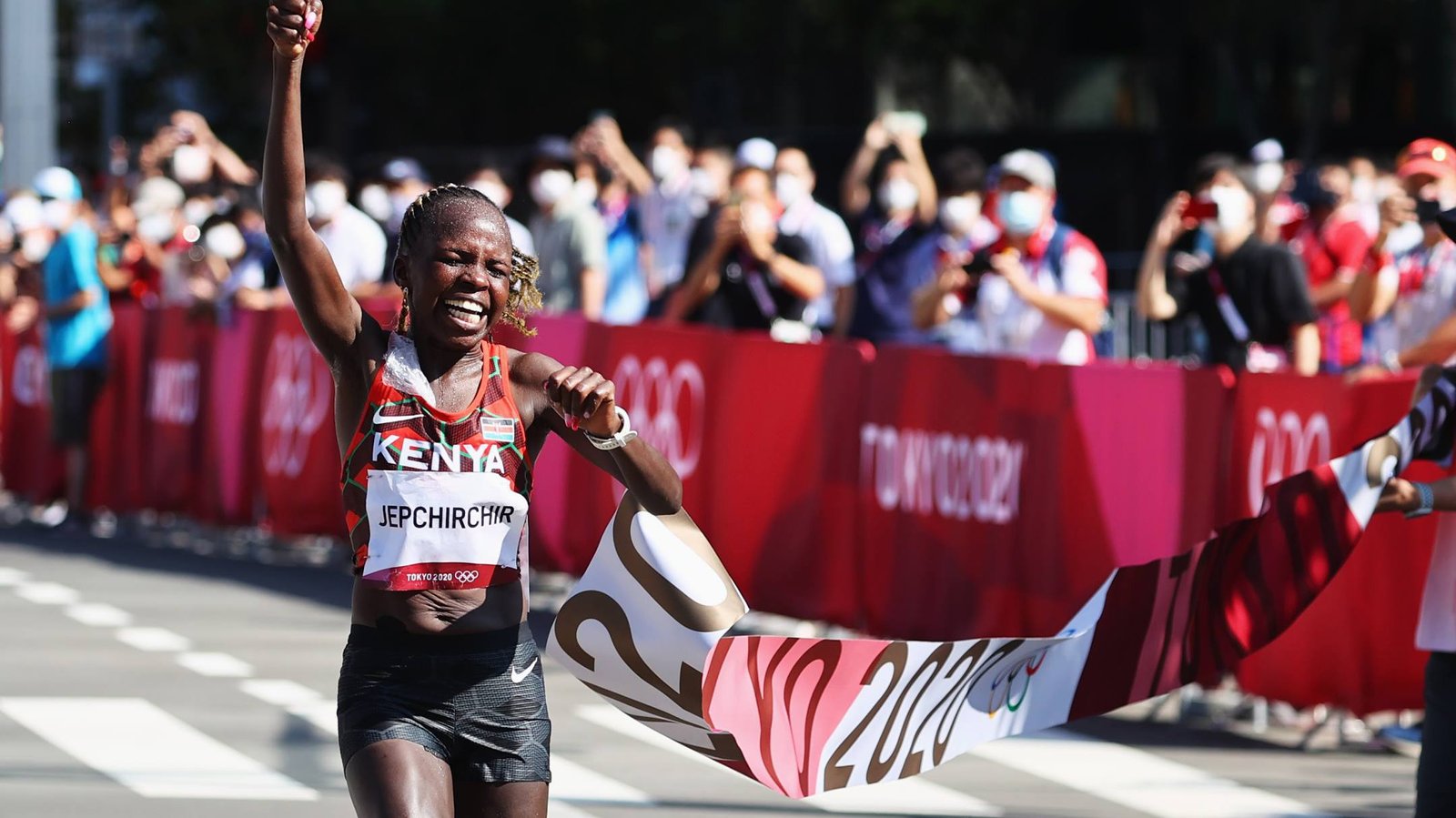 Kenya took their medal count at the Olympic Games in Tokyo to eight and gold count to three after Peres Jepchirchir led a Kenyan 1-2 finish in the women’s marathon early Saturday morning.

Jepchirchir, the reigning World Half Marathon Champion and record holder came off top to cut the tape first in a time of 2:27:20 while World Record holder Brigid Kosgei swept home in second for silver in 2:27:36.

American Moll Seidel was third after clocking 2:27:46 to clinch bronze.

Kosgei just but managed to hold on for the final 2km when she looked out of sorts after Peres had bolted away to go for gold. With the American Seidel trying her best to close the gap, Brigid maintained her pace to ensure Kenya’s medal count at the Games increased.

Unfortunately, the third Kenyan in the race, reigning world champion Ruth Chepngetich could not finish the race after pulling out with 4km to go.

The Kenyan trio had exhibited brilliant teamwork all through the race with Peres partly rewarded for her ‘generosity’.  She was not only helping her two teammates to hydrate at the water points, but also often extended a hand to Israel’s Lonah Salpeter, who is a Kenyan but married to an Israeli. 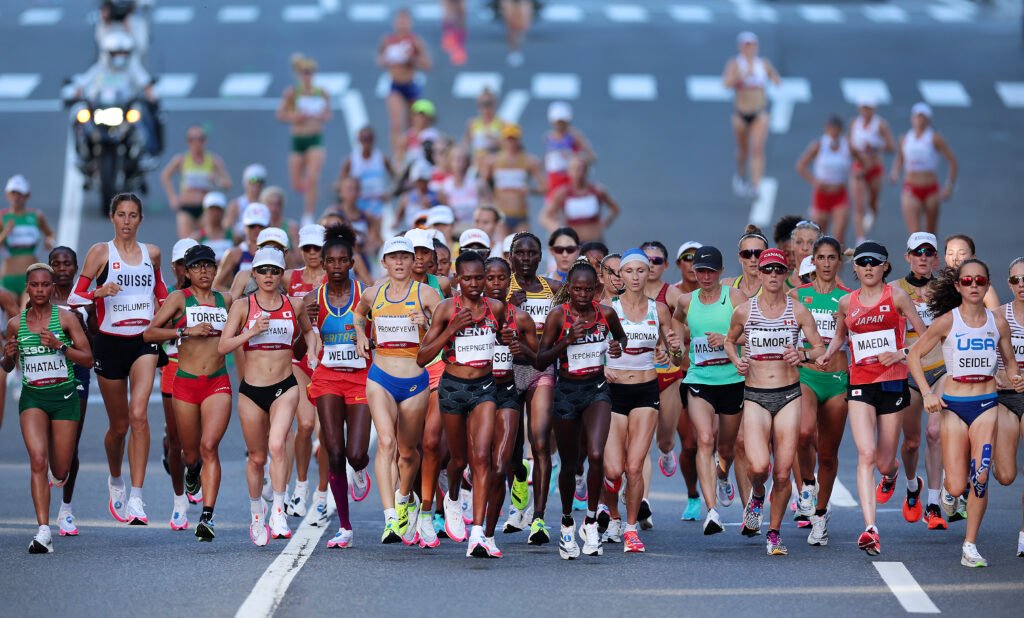 In punishing heat in the Japanese City of Sapporo, hydration was key as athletes kept on dipping their hands across the water collection points as well as picking up ice bags to keep their bodies warm. The 6am temperature was so high and it was evident just why the organizers had decided to pull back the race by an hour.

But the who’s and who’s nots started being separated at the 28km mark when the leading group whittled down to just 11. After 29km, it was now down to five with Kenya’s Chepngetich starting to wither away.

The World Champion ultimately gave in after 32.5km, slowing down, walking and ultimately stopping by the roadside, clearly suffering from something. 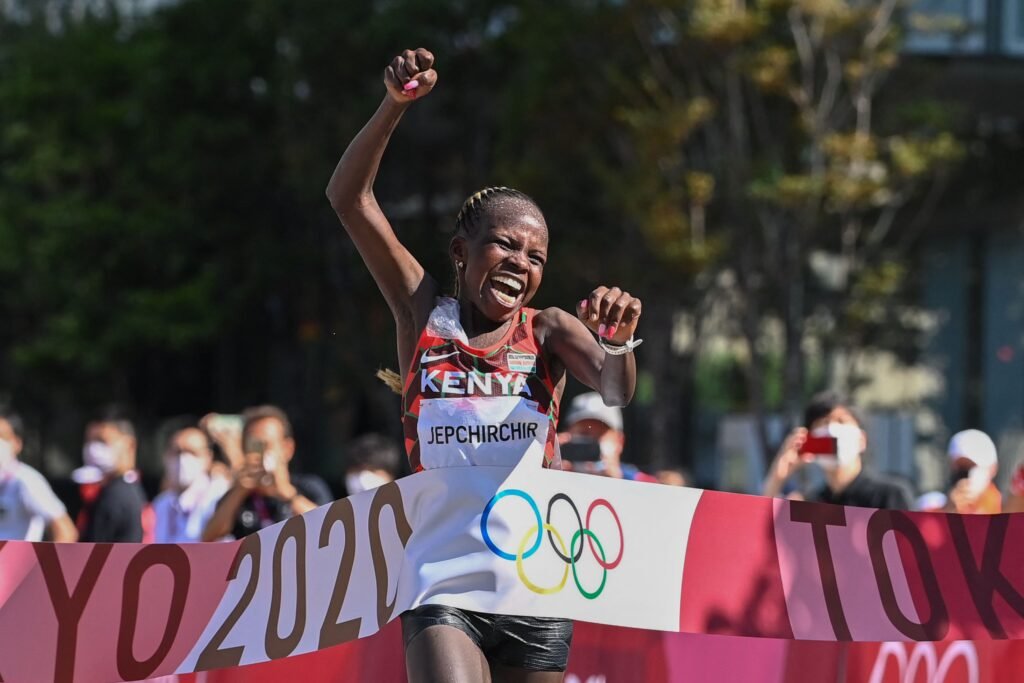 The rest of the five; Brigid, Peres, Salpeter, USA’s Molly and Bahrain’s Eunice Chumba kept the fight upfront. They would then go through the 35km mark in 2:02:58, both Kenyans running shoulder to shoulder.

CHumba started falling off the pace and so did Salpeter and Molly. After 37km, Peres and Brigid had gapped away. Salpeter started falling way behind and she ultimately slowed down and walked, also suffering from the tough heat.

The two Kenyans stepped up the pace but when they got to the 40km mark, it was now an individual race after almost two hours, 15 minutes of teamwork. Peres pumped up the pace in the final uphill loop with her eyes on the finish line.

The grim smile on her face in the final one kilometre told of her joy at the gold medal and she jumped in joy, punched the air when the tape finally united with her body. 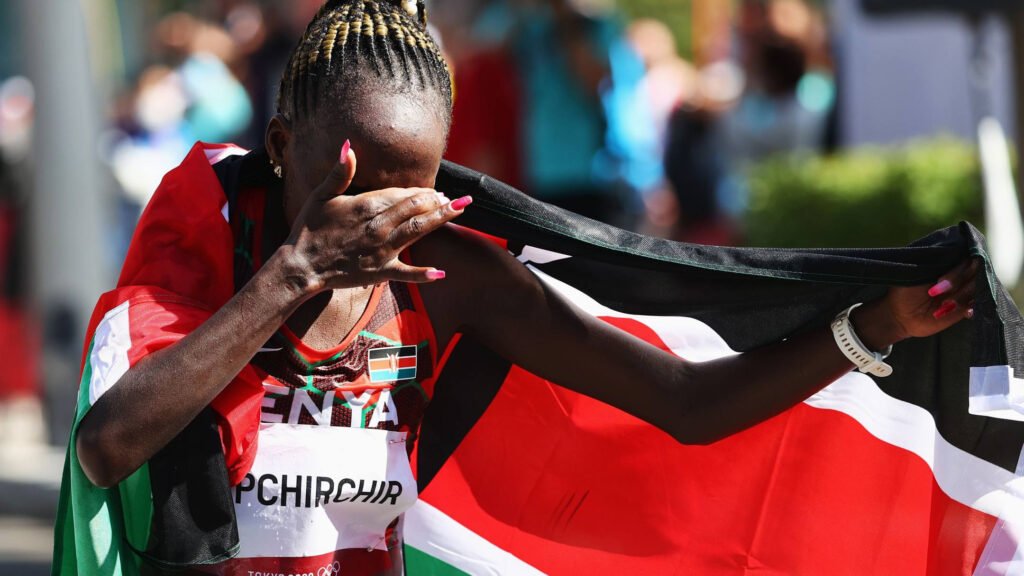 Behind her, Brigid was in a war to ensure she secured the silver as she looked to struggle punting up the uphill climb. American Seidel was lurking behind her shoulder, waiting for her to wither off and pluck off the silver right from her watch.

But there was no way Brigid was letting the pot break at the doorstep as she gathered energy from deep within her loins to manage a second spot finish while Seidel settled for bronze.

Kenya now has six medals from the Olympic Games with three gold; Peres adding on to what Emmanuel Korir and Faith Kipyegon had already reaped.

There will be an opportunity for two gold medals in the second session with the final of the women’s 10,000m and the men’s 1500m.