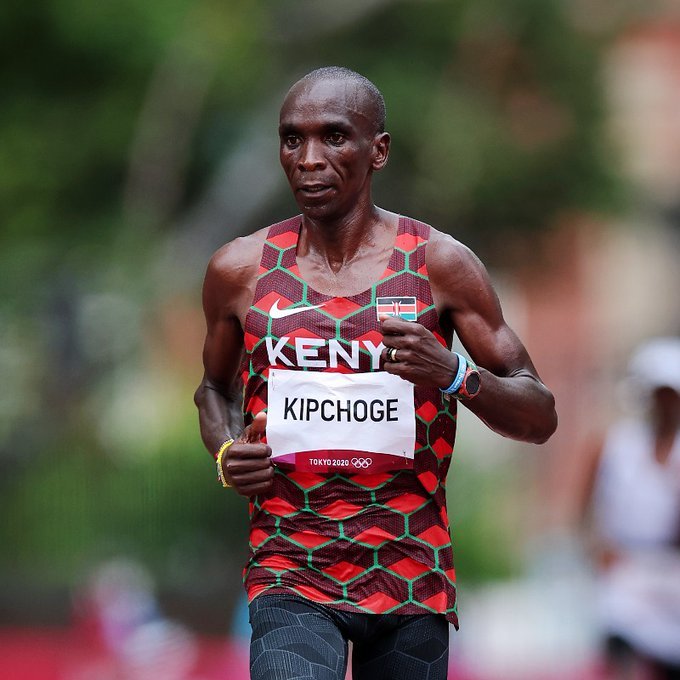 Eliud Kipchoge was the man of the moment, a legend of Olympic Marathon on Sunday in Tokyo bagging  a Gold medal in the Olympic men’s Marathon in the 16th and final day of full competition of Tokyo 2020 Olympics in Sapporo Japan clocking a 2:08:38 at the final touchline.

Kipchoge becomes the third marathoner ever to defend his Olympic title after Ethiopia’s Abebe Bikila who captured gold medal at the 1960 Rome and 1964 Tokyo Games, and East Germany’s Waldemar Cierpinski who earned victories at the 1976 Montreal and boycotted 1980 Moscow Games. 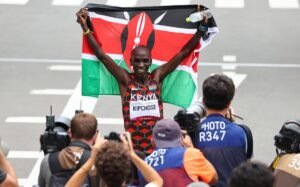 The first runners up was Abdi Nageeye of Netherlands who finished in the second position clocking 2:09:58 bagging a Silver medal in the competition, where Kipchoge had finished almost two minutes before. 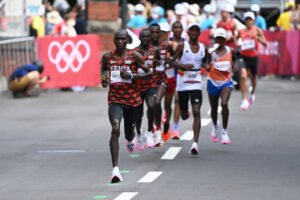 Nageeye who is currently part of the NN Running Team, an international team of elite long-distance runners managed by Global Sports Communication in Nijmegen, Netherlands finished 11th at the Olympic marathon in Rio.

Bashir Abdi of Belgium clocked 2:10:00 winning the Bronze Medal denying Kenya’s  Lawrence Cherono a chance which saw him finish in the fourth position.

Cherono appeared well placed to follow team mate Kipchoge over the line as the trio entered the final 200 metres, leading the three as they came within sight of the line, but Nageeye accelerated past him, beckoning Abdi to come with him.

He won the Boston Marathon with a time of 2:07:57 after out-sprinting two-time Boston winner and World Championship Silver medalist Lelisa Desisa on the final block of Boylston Street in 2019.

Ethiopia’s Shura Kitata who won in London in October as Kipchoge struggled in the cold  was the first to drop out after just five kilometres.

London Olympic champion Stephen Kiprotich and Kenya’s Amos Kipruto are among the marathoners who fell away from the race while Suguru Osako who was the highest-placed Japanese runner finished in considerable pain in sixth position.

We’ll see starting at 8 p.m. Tokyo time on Sunday night (7 a.m. Eastern) and there will be music and speeches, and a handoff to Paris for the 2024 Games.
There will be speeches and Several dignitaries will speak highly of these Games in particular and the Olympic movement in general. Thomas Bach, the president of the International Olympic Committee, will be one of them,