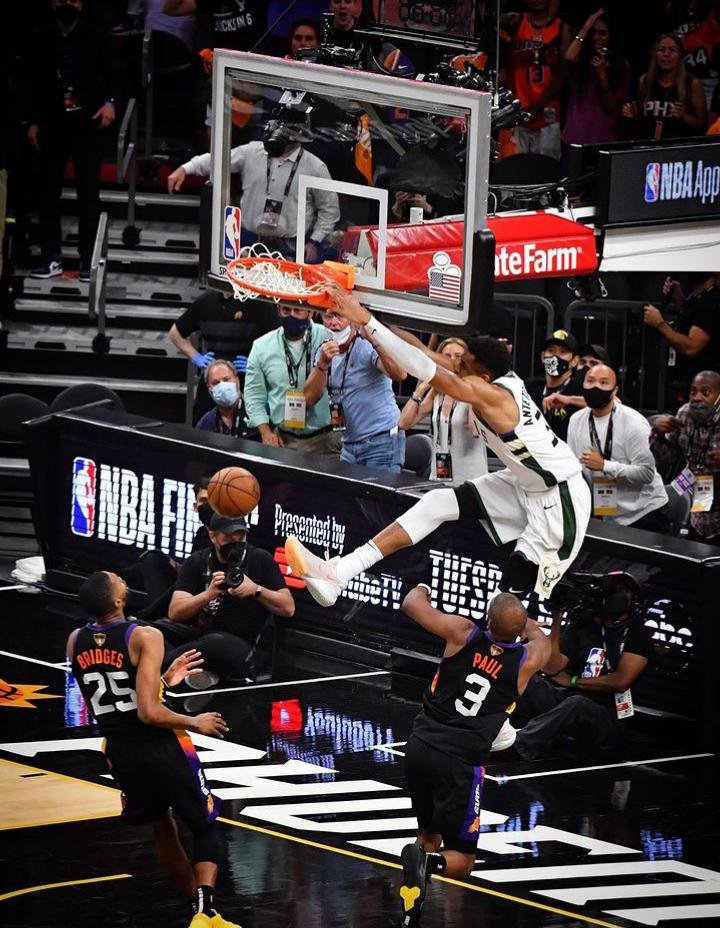 Milwaukee Bucks are only one game away from their first NBA title since 1971, just over 50 years ago. This is after sweeping aside Phoenix Suns 123-119 in a thrilling Game 5 of the NBA finals played early this morning at Phoenix.

The suns have enjoyed a good home run this offseason and in the playoffs but they were stunned by Giannis Antetokounmpo led Milwaukee Bucks.

The best moment of the match is when Jrue Holiday made a steal from Suns star Devin Booker and then made an alley-oop pass to Giannis Antetokounmpo who dunked it home to seal a game 5 win for the Bucks. The talisman, Giannis recorded 32 points nine rebounds, and six assists. 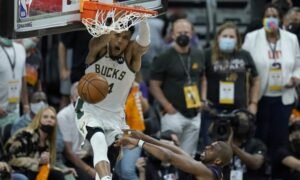 Milwaukee Bucks Giannis Antetokounmpo Dunks in the closing stages of the match in their Game 5 win over Phoenix Suns in the 2021 NBA Finals.
PHOTO: Courtesy

Despite the awful steal Jrue made from Booker, Devin Booker still led the Suns in total points scored, recording 40 points, In his second game in a row he is scoring 40 points.

Chris Paul had a better match in Game 5 unlike in games 3 and 4. He, however, still struggled the better part of the match scoring 21 points scoring 10 in the last quarter.

Over the finals 10 minutes of the match, the Bucks were enjoying a comfortable 14 points lead but back-to-back 3-pointers from Mikal Bridges and Paul cut the deficit to single digits midway through the fourth quarter.

A staggering three-pointer by Booker further reduced the Bucks lead to 120-117, with only 1 minute 24 seconds left on the clock, but the steal and alley pass by Jrue to set up Giannis for a dunk a minute later sealed the win for the Bucks who were the better side in Game 5.

The first quarter was a shock to Bucks as mistakes and fouls they made ensured they were trailing 32-21 at the end of that quarter, but stunning plays from Giannis and Middleton ensured they came back in the second quarter and went to the end of the first half leading the Suns 64-61. 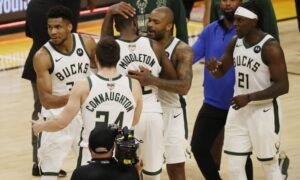 Milwaukee Bucks players celebrate after winning Game 5 in the 2021 NBA Finals at Phoenix against the Phoenix Suns. The Bucks are just one win away from the NBA Title.
PHOTO: Courtesy

The Bucks are now enjoying a 3-2 lead over the Suns in the 2021 NBA Finals series after sweeping games 3, 4, and 5 consecutively. The Suns comfortably won the first two matches played at Phoenix before falling to the Bucks at Milwaukee.

Speaking after the match, Phoenix Suns head coach Monty Williams attributed Jrue Holiday for the steal he made from Booker and setting up Giannis in the dying moments of the game, saying, “A great play by Jrue, I don’t have any other words for that one.”

Asked about his comments after the match, Giannis, commonly known as the Greek Freak had only four words, “One more to go”.

On his part, Jrue Holiday said, “They don’t call him the Freak for nothing I threw it as high as I could,” speaking of Giannis.

Bucks guard Pat Connaughton said, “There’s a lot of guys that would dribble it out and try to waste more time, but he (Giannis) knew the time, he knew the score, and he knew a bucket would kind of be a backbreaker. He threw it to where there may only be one or two individuals in the world that could get it.”

The focus now shifts to game 6 that will be played on Wednesday early morning, EAT, at Milwaukee Bucks home court, the Fiserv Forum. Should the Bucks win that match, they will be crowned the 2021 NBA Champions.