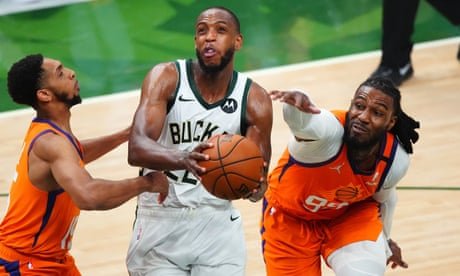 Milwaukee Bucks Khris Middleton produced an MVP performance as the Buck fought their way back into the game in the NBA Finals series with a crucial Game 4 win against the Phoenix Suns played in Fiserv Forum on Thursday early morning. 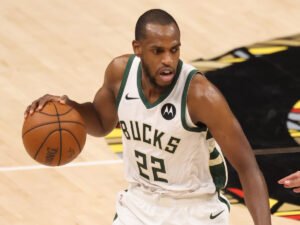 Khris Middleton scored 40 points to lead Milwaukee Bucks to a win over Suns in Game 4 of the 2021 NBA Finals.
PHOTO: Courtesy

Khris had a final quarter to remember as he scored 10 consecutive points for the Bucks as Milwaukee was behind with nine points, giving the Bucks the lead. 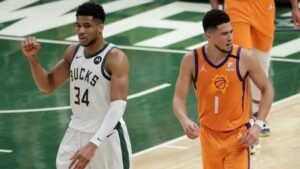 Bucks Talisman Giannis Antetokounmpo who has single-handedly carried Bucks in the playoffs this offseason scored 26 points and made a crucial save when he blocked on Suns center Deandre Ayton to keep the Bucks ahead with one minute 15 seconds left.

Suns shooting guard Devin Booker who has had an enormous season recorded the highest points in the match, scoring 42 points including 18 points in the third quarter alone, but it was not enough to pull a winner over the Bucks who were playing in front of their home fans.

Antetokounmpo has received comparisons to Michael Jordan after becoming only the sixth player in the history of NBA finals to score 40 points in consecutive games when he scored 41 points in Game 3. 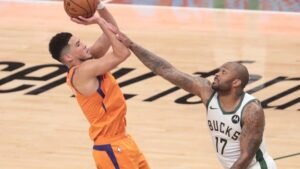 The focus will now head to Game 5 as the two teams are tied at 2-2 apiece after Phoenix Suns swept aside Milwaukee at the first two matches of the series that was played at Phoenix, thanks to performances by Devin Booker, Chris Paul, and Deandre Ayton.

Chris Paul on his side had yet another disappointing night for him making five turnovers of the 17 turnovers the Suns made that dragged the staggering performance by Booker.

Despite the loss, the Suns led for the better part of the match even ending the first quarter leading the Bucks  23-20, with 14 of those 23 points coming from Deandre Ayton, 6, and Devin Booker who scored 8 points in that first quarter.

The fourth quarter was, however, the quarter that the Suns let go of the match with an iconic Giannis and stunning Khris Middleton rose up to the occasion to seal the game 109-103 in favor of the Bucks amid chants from the crowd saying “Bucks in 6! Bucks in 6! Bucks in 6!”

The Bucks have won the NBA title just once in franchise history in 1971 whilst the Suns are yet to win the NBA title since joining the league in 1968 and that is what is making the tie even more interesting with both teams now tying at 2-2.