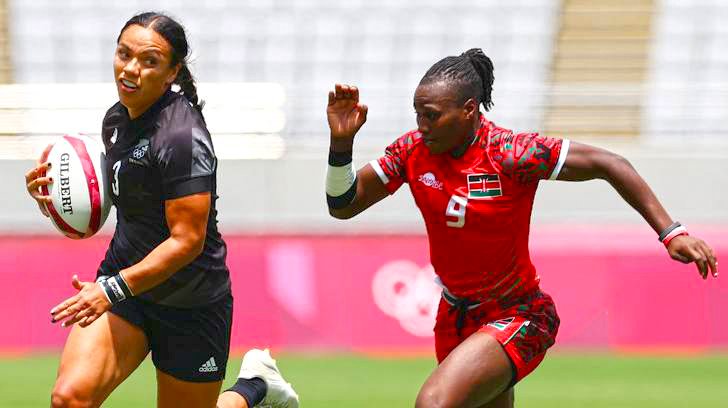 The Kenya Lionesses must now beat Great Britain on Friday to see their hopes of qualifying to the Cup quarters remain alive at the Tokyo Olympic Games after losing their second straight match to Russia Olympic Committee on Thursday afternoon.

The Lionesses started their day with a 29-7 defeat at the hands of New Zealand and went on to lose 35-12 in their second game against Russia.

Head coach Felix Oloo said he was happy with the girls’ performance despite the loss, bearing in mind the tribulations they had before the tournament began. The coach has had only two days to train with the full squad as half of them had been held in 14-day quarantine in Tokyo upon their arrival two weeks ago.

“It wasn’t a bad performance especially going by what the girls have been through. Fourteen days is not a short time and they had to do it in tough circumstances. But they were still able to execute some plays it is only the defense where we fell three or four paces short. But we will try correct that,” Oloo said after the game.

“Great Britain will be a tough test but we are ready for it. We will give it our all because we know we still stand a chance to make the Cup quarters,” he added.

Captain Philadelphia Olando said; “It’s not over until it’s over. We are still going all out. We have seen teams losing then picking themselves up even with the slimmest of chances. I still believe in the girls that we can still recover lost ground and do our best tomorrow,”

Against the Russians, Lionesses thought they almost had it within their grasp when they came from 14-0 down to 14-12 just before halftime.

Janet Okello dotted Kenya’s first try with a powerful run through the middle after using her strong right hand to push away her markers, before stomping up the pitch to dot down under the posts.

Okello then completed her brace after Kenya won a penalty close to the try box. The speedstar started the ball quickly and citing space between the defense, sliced through to extend across the line at the buzzer to take the scores to 14-12.

The Russians had been off to a good start. Sozonova Nadezhda dotted down Russia’s first try of the game after citing space to cut through the defense off a scrum just inside Kenya’s 22. The conversion by Seredina Kristina gave them a 7-0 lead.

Off another scrum, the Russians went 14-0 up. They picked up the ball, stretched the Kenyan defense out wide before Kukina Marina fed Kristina of the ball, the latter stretching her hand to dot down despite a late challenge from the Kenyan side.

Coming off the break, the Lionesses knew they were within striking distance of the Russians. But they were blown away with the Europeans starting quick off the blocks. Daria Shestakova dotted down their third try of the game with a powerful run down the middle.

They were 28-12 up moments later when a persistent Russia finally broke through a determined Kenyan defense. Captain Tiron Alena crossed over for the fourth try of the game with the conversion sailing through.

Marina then completed her brace and took the game further beyond Kenya with another spirited sprint down through the middle after picking out the slightest of spaces between an attacking Kenya side.