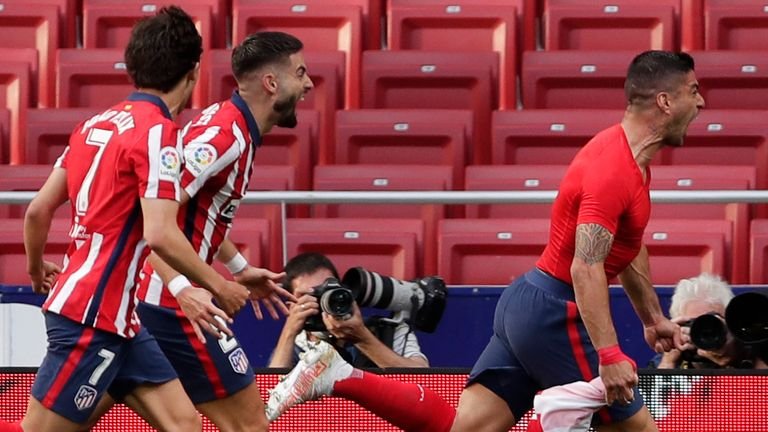 Atletico Madrids star striker Luis Suarez had one of the best night in Wanda Metropolitano yesterday night during their encounter with Osasuna after scoring the most dramatic and winner goal for the host Atletico Madrid increasing their title winning chances.

It was one of the best night in Madrid for Diego Simeone who hailed Luis Suarez as “extraordinary” on Sunday after the Uruguayan scored the goal that could win Atletico Madrid LaLiga.

Atletico trailed Osasuna with nine minutes to go at the Wanda Metropolitano and faced a defeat that would not just have postponed their bid to be champions but allowed Real Madrid, who were beating Athletic Bilbao, to go top with one game left.

Instead, Atletico scored in the 82nd and 88th minutes to pull off a stunning turnaround. Renan Lodi smashed in an equalizer before Suarez proved the hero, firing in from eight yards to spark mass celebrations.

“He’s extraordinary,” said Diego Simeone. “He came here wanting to prove people wrong, wanting to show that he was a forward still at the top of his game. Who better than him to decide a match that seemed to be getting away from us?”

Atletico’s players and substitutes piled onto Suarez in the corner and at full-time, some of their players dropped to their knees, not with ecstasy, but relief, the title now just one win away. 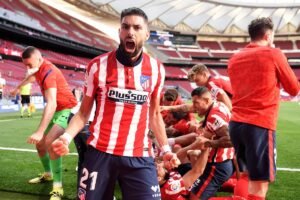 Speaking after the game Suarez  did not hold back saying: “These are moments of happiness,” said Suarez. “It was one of the best first halves of the season. We missed a lot of chances, me in particular, but to win the league you have to suffer and today we stepped up.”

Atletico Madrid could have been crowned champions with a game to spare, if Real Madrid lost at San Mames but it was all a night to reckon for Zinedine Zidane after Nacho Fernandez put Real ahead in the second half and Atletico’s priority quickly became preservation.

Victory maintains their two-point advantage and another win away at Real Valladolid next weekend will guarantee a second league title in 25 years.

Barcelona are out of the running after they lost 2-1 at home to Celta Vigo. Santi Mina scored twice, including an 89th minute winner for Celta after Lionel Messi headed in the opener.

Suarez, who was forced to leave Barca last summer, has scored 20 goals this season, with his latest strike putting his new team on the brink of the title.

football fans returned to the pitch finally after more than a year away, in only two games in the Valencia region, after the Covid-19 infection rate dropped below the target rate set by the government. 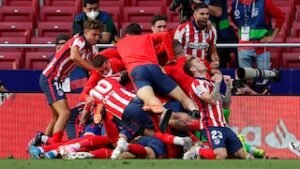 At Villarreal the maximum 5,000 fans cheered their team to a 4-0 home victory over high-flying Sevilla.

But 60 kilometres (37 miles) down the Mediterranean coast, Valencia, whose relations with their fans are strained, sold ony 3,000 of the available places. The impact was similar as the home team beat struggling Eibar 4-1.

In Madrid, no fans were allowed in the Wanda Metropolitano, but they gathered outside and cheered as the team bus arrived.

Atletico had 16 shots in the first half but could not find a way through.

The best of them came from an Angel Correa cross but Suarez took too long and with three Osasuna players in front of him, he could only pick out the post.

Atletico’s players might have thought Real Madrid had conceded when a huge cheer came from the fans outside, but it was Barca who had let in an equalizer against Celta Vigo. All the top three were being held at half-time.

Atletico thought they were ahead on the hour as Stefan Savic finished from Trippier’s cross. Fans outside set off fireworks, but Savic was just offside and the goal was ruled out. 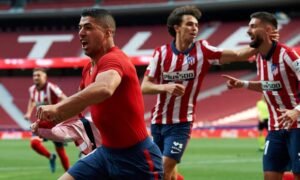 Atletico put the ball in the net again, only for flag to go up again, Carrasco nipping behind too early before powering in.

The flag stayed down at San Mames a few minutes later though as Nacho gave Real Madrid the lead in the 68th minute, Karim Benzema, who was offside, missed Casemiro’s cross and Nacho prodded in.

Real Madrid were going top and seven minutes later, things got worse for Atletico as Ante Budimir was free at the back post to head in a free kick. The fans outside went silent.

Simeone brought on two substitutes and they combined to level. Joao Felix scooped a superb pass through for Lodi to thunder in with eight minutes left.

There was hope and in the 88th minute there was joy, Carrasco latching onto a Trippier pass and pulling back perfectly for Suarez, who arrived late, fired in and ran to the corner.