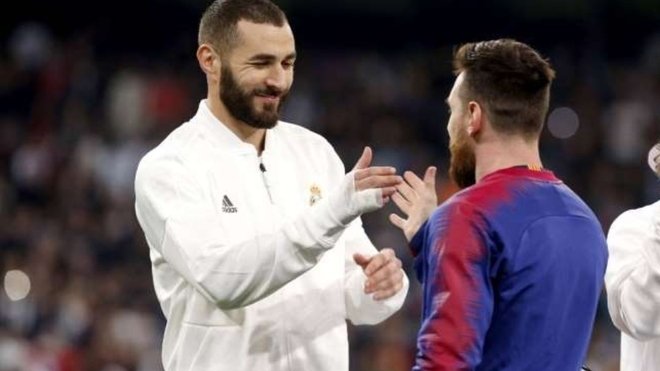 As two old adversaries are expected to lock horns at Santiago Bernabeu on Saturday Karim Benzema Real Madrid star says Lionel Messi does everything for Barcelona.

The Blancos are aware that they are facing another difficult test with the Real Madrid striker readying himself for another Clasico clash with a “very dangerous” rival.

The Blancos are due to welcome their old adversaries to Santiago Bernabeu on Saturday.

It will be tough contest in form of both sides of Barcelona and Real Madrid looking forward to clinch the title 2020-21 for Ronald Koeman and Zinedine Zidane.

Speaking to La liga TV, French International Karim Benzema acknowledge the good play from their rivals saying that; “They always have possession, they have a good goalkeeper and Messi, the player who does everything for Barcelona. We have to be careful because he is very dangerous.”

While Real Madrid have every reason to be wary of facing Messi again, given all that he has achieved down the years, Barca will need no reminding that the Blancos have plenty of match-winners on their books.

Vinicius Junior was on target midweek delivering a superb on a Champions League stage first leg tie, with the Brazilian bagging a brace in a 3-1 win over Liverpool that has Madrid in full control of that quarter-final contest.

Benzema has, however, remained the go-to man for Zidane’s side this season.

Since the departure of Cristiano Ronaldo in 2018, the 33-year-old has been on track, enjoying prime scoring career at the club.

Karim Benzema has found the net on 24 game participation across all competition with his personal best sitting at 32 but he is reluctant to give himself a big billing.

Talking about his form this season he said; “I don’t know if it’s my best season, every year I start from scratch and I want to improve on the previous one.

“Now I’m on a scoring streak and if I can continue working to help my team win points and games, I’m going to do so. The important thing is to win.

He went on to say: “I feel free on the field, I do what I want, I help the team at the beginning of the play, I finish it.

“There are plenty of games left and this league will be decided at the end. It is very difficult, but we have to treat every game as if it were a final.”