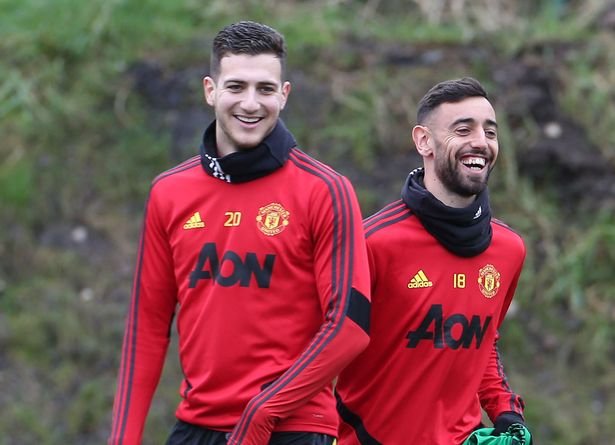 Manchester United will take on high-flying Milan on their Europa League round of 16 tie, indeed an interesting draw that will see former Manchester United forward Zlatan Ibrahimovic return to Old Trafford as a Milan forward.

AC Milan who sit second in the Serie A table just three points adrift of rivals Inter will be facing it out with the second placed Manchester United in the Premier League 11 points from rival neighbors Manchester City.

Thursday’s match will also see Dalot who is on loan at San Siro  take on his United teammates, with UEFA rules allowing loan players to face their parent clubs.

Dalot has been in fine form since he was loaned to AC Milan and he scored in their Sunday’s win against Verona darting into the box and firing a venomous effort into the top corner.

It is clear that the two has been keeping in touch with Bruno Fernandes clearly seen keeping a close eye on his compatriot who he grew very close to when he first moved to Manchester last year and congratulated him on his goal.

Taking to his Instagram page the United playmaker replied to one of Dalot’s posts saying: ‘What a goal you just scored!’ And Dalot responded in kind, setting the scene for their upcoming tussle: ‘Thanks brother. I’ll see you Thursday!

Having won in their respective matches on Sunday as they warm against each other in UEFA Europa League, both teams picked a win with Ole Gunnar Solskjaer picking an excellent win from derby.

The Red Devils ended rivals Manchester City’s long winning run thanks to goals from Fernandes and Luke Shaw in a 2-0 victory at the Etihad though the gap to the top of the table is still 11 points.

‘I like that kind of pressure. It’s good pressure. I knew what I had to do. I did it in the right way with the right power and I’m happy to score, of course. ‘Honestly for us it’s about winning.

People will always complain about everything. Today it will still be Bruno never scores in big games. ‘They will put open play no goals, it was a penalty [and say] it doesn’t count! So for us the most important thing is winning the game. ‘It doesn’t matter how you score, when the ball touches the net it’s a goal. I will be happy and it doesn’t matter if it’s me or another one scoring.’