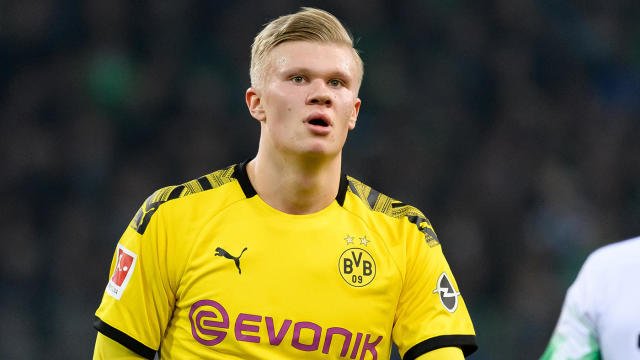 City are preparing for life without their starting striker Sergio Aguero, who is reportedly on his way out of the club.

The Argentine has played second fiddle to Gabriel Jesus in the attacking line, as manager Pep Guardiola prefers the young Brazilian upfront to the experienced Aguero.

Former Atletico Madrid striker Aguero is wanted by Paris Saint Germain (PSG) and City are looking for a replacement for their forward.

Gabriel Jesus has not quite hit the mark and impact as Aguero has and he is the only back-up striker to the Argentine.

Borussia Dortmund striker Erling Haaland is pursued by a number of European clubs and City look to battle for his signature.

Dortmund are under financial crisis, so much that they had to reduce Manchester United target-man Jadon Sancho’s price.

Haaland has been a standout player for the Bundesliga side and no doubt his departure is more of when and not if.

The Norwegian has replicated his RB Salzburg form in Germany and proven to be not only a lethal striker but one of the brightest talents in Europe.

He is admirably one of the best strikers at the moment and any club would want to sign him.

However, the pandemic has taken a financial toll on football and clubs are unwilling to spend cash on players.

Haaland has a £68 million release clause on his contract but City are so willing to pay more to lure him from Signal Iduna Park.

With a host of clubs sniffing around the 20-year-old forward, it may boil down to who offers the most and City could be winning the race for his signature.

Should Man City pull this off, Haaland would be the most expensive signing in the history of English football

Haaland has registered 22 goals in 21 appearances across all competitions but lags behind Eintracht Frankfurt’s striker Andre Silva and Robert Lewandowski in the Bundesliga top scorer’s chart this season.