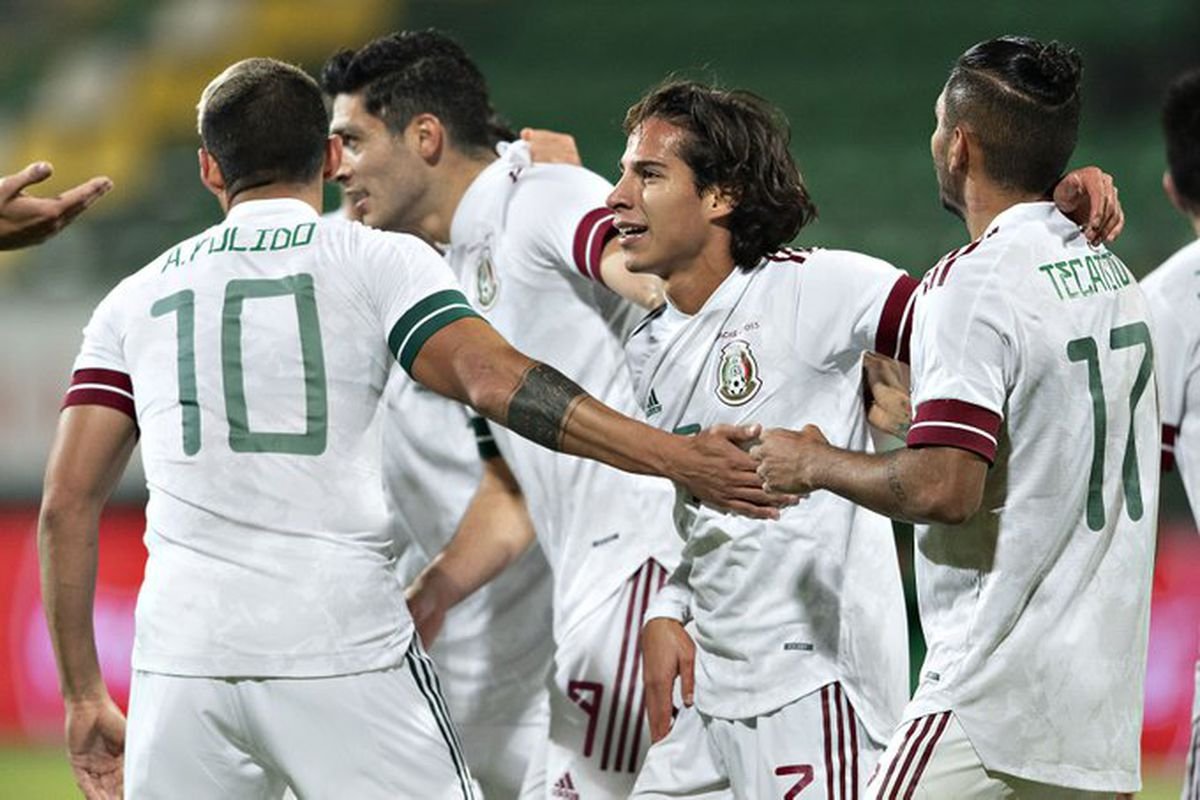 International African football resumed this week, as Algeria stretched their unbeaten run to 20 matches with a 2-2 draw against Mexico in the Hague, Netherlands, on Tuesday.

Mexico’s Adlene Guedioura was handed his marching orders 10 minutes after the break following a second yellow card. Algeria had come from a goal down after Jesus Manuel Corona had given the Mexicans a 43rd-minute lead.

The African champions, however, drew level two minutes later when midfielder Ismael Bennacer struck a low shot from the edge of the box after being teed up by Sofiane Feghouli.

After Guedioura’s red card, Algeria kept up their attacking game and were rewarded in the 66th minute through captain Riyad Mahrez who was set up by Ramy Bensebaini.

However, the Mexicans drew level four minutes from the final whistle through Diego Lainez off a Raul Jimenez pass.

Also in the Netherlands, Ivory Coast lost 1-0 to Japan, conceding a last gasp winner against the Samurai Blue. Naomichi Ueda stepped off the bench to head in the winner in added time to aid the Japanese to victory.

After their previous friendly match against Guinea Bissau was cancelled due to Covid-19 restrictions, Angola took to the pitch at the Municipal Stadium of Óbidos in Portugal, picking up a 3-0 victory over Mozambique.
Mateus Galiano scored a goal in either half in the 45th and 69th minutes, before Gelson Dala put the icing on the cake with the third with 12 minutes left to play.

Meanwhile, Nigeria’s hopes of bouncing back from last week’s loss against African champions Algeria didn’t go to plan as they were held to a 1-1 draw by Tunisia, the side they beat to clinch the Africa Cup of Nations 2019 bronze in Cairo, Egypt last year.

They had the chances to win though, with Kelechi Iheanacho who scored the opener for Nigeria also missing a penalty.

Iheanacho quenched his three-year thirst for an international goal for the Super Eagles when he opened the scoring with a powerful shot on the half-turn inside the box after 20 minutes.

He had a chance to double his tally after 28 minutes when Ahmed Musa was cluttered down inside the box by Tunisian keeper Farouk Ben Mustapha. However, his tame penalty was well-saved by Mustapha.

Tunisia then drew level at the stroke of halftime when Mohamed Drager struck the ball home from the edge of the six-yard box after a good build-up on the left, Rafia Hamza delivering the final cutback.

Meanwhile, Nigeria’s opponents in next month’s Africa Cup of Nations qualifiers Sierra Leone suffered their second successive friendly match defeat after going down 1-0 away to Niger in Niamey.

Ghana’s new head coach CK Akonnor breathed a huge sigh of relief on Monday night as he saw his side bounce back from last week’s 3-0 beating at the hands of Mali to thrash Qatar 5-1 in their second friendly match in Turkey.

Making five changes from the team that lost to Mali, Akonnor was under pressure to ensure the Black Stars made a resounding statement and they did so with a superb performance.

Skipper Andre Ayew bagged a brace to add on to goals from Tarique Fosu, Samuel Owusu and Caleb Ekuban. Qatar’s consolation was scored by Ali Almoez.

Midfielder Thomas Partey starred in the match though, as he played a crucial role in the middle of the pack and started the build-up for the opener. He laid the ball through for Jordan Ayew who in turn fed Fosu for the opener.

The Qataris found themselves back in contention just before the break when Almoez lobbed the ball over Razak Abalora.

But, Ghana were a different side in the second half, Ayew making it 2-1 before Partey fed Owusu for the third. It was a goal made in the Abedi Pele household for Ghana’s fourth as Jordan fed his brother Andre.

Substitute Ekuban wrapped up the tie with the fifth.

In partnership with ANA and  Sports Leo