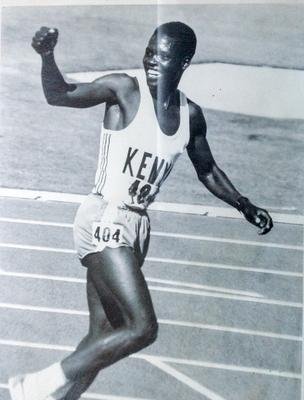 Jipcho died, aged 77, at the Fountain Hospital after being admitted for three days.

According to Jipcho’s daughter, Ruth, he died at 3 am in the Intensive Care Unit.

The official cause of death was multiple organ failure, after last week he complained of stomach pains.

“Our father had been sick for a while. He lost the battle at 3.00 am in the morning,” Ruth told Kenyan publication Daily Nation.

“We are sad that he has left us and we are asking for your prayers at this difficult moment.”

Jipcho won silver at the 1972 Munich Olympic Games in the 3000m steeplechase.

National Olympics Committee of Kenya President Paul Tergat said: “We are saddened by the loss of Jipcho, a pioneer of athletics in Kenya. My heartfelt condolences to his family and Kenyans at large.”

While a world-class athlete in his own right, Jipcho was best remembered as one of the first unofficial pacemakers in a top event. At the 1968 Olympic Games, in Mexico City, he sacrificed his chances of glory as he helped pace countryman Kipchoge Keino in the men’s 1500m. Keino would go on to claim gold.

Jipcho also won silver at the 1970 Edinburgh Commonwealth Games in 1970. Three years later he was crowned King of Africa as he claimed gold in the 5000m and 3000m steeplechase, at the All Africa Games in Lagos, Nigeria.

He won gold again in the 5000m and 3000m steeplechase, this time in 1974 at the Commonwealth Games held in Christchurch, New Zealand.