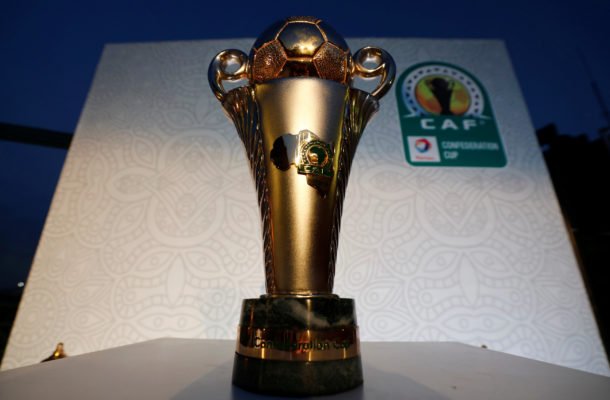 Morocco’s Hassania Agadir completed the double over Libyan visitors Al Nasr on Sunday evening at Agadir, beating them 2-0 to reach the African Confederation Cup semifinals for the first time in their history.

Husa as Hassania Agadir are fondly known by their supporters, reached the final four winning 7-0 on aggregate, after winning the first leg in Cairo 5-0 last weekend.

They will face either their compatriots RS Berkane or Egypt’s Al Masry in the semifinals next May.

Karim El Berkaoui who scored a hattrick in the first leg proved once again to be Agadir’s hero when he scored his side’s opener after 68 minutes from the spot. Redah Atassi scored four minutes into injury time with the game’s last kick as his side eased this way to the semifinals.

The game was played behind closed doors in Adrar Stadium of Agadir, as requested by health authorities in Morocco.

The first half was a story of rare chances, and the first leg result seemed to have its impact on the game, as Hassania were happy to see the ball played quietly in midfield, while Al Nasr knew they were facing a mountain to climb.

After the break, there were some energetic trials from both sides but without really threatening goalkeepers Abdelrahman El Houasli for Agadir or Fathi Abdullah for Al Nasr.

The visitors had their best chance four minutes after the hour mark when Osama Albedwi sent a shot from range that just missed the target.

Agadir finally broke the deadlock after 68 minutes. Youssef Elfalhi was fouled inside the vital area, and from the spot, El Berkaoui sent Abdullah the wrong direction to give his side the lead.

It was El Berkaoui ninth goal of the campaign this season to cement his place on top of the scorers’ charts.

El Houasli had the last save of the game when he stood tall to stop Moetaz Mehdi from finding an injury-time equaliser for the Libyans.

From the resulting foul, Atassi’s header doubled Agadir’s lead with the last kick of the game as Agadir eased to the final four.