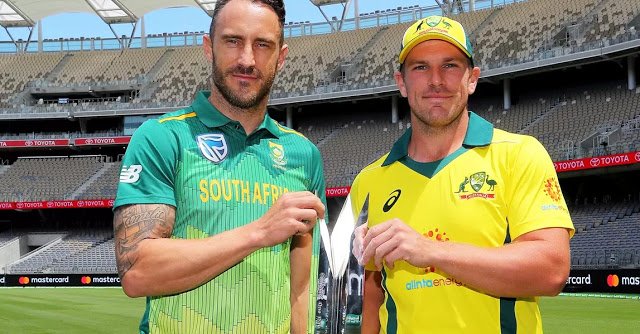 South Africa will look to keep up their momentum and translate that into a win in the first T20 International against Australia at the Wanderers on Friday evening.

South Africa showed spark during the T20 Internationals against England but ended up on the losing side. They will hope the returns of Faf du Plessis and Kagiso Rabada can translate that spark into results during the three T20Is against Australia.

Against England, captain Quinton de Kock and Temba Bavuma were superb at the top, and there were promising contributions from Rassie van der Dussen, David Miller and Heinrich Klaasen, but a lack of consistency, and at times experience, in the bowling department cost them. That, however, should be less of an issue now that pace spearhead Kagiso Rabada has returned to the side.

De Kock will also have the experience of Du Plessis to count on. Du Plessis earlier this week stepped down as captain from Tests and T20Is but remains a huge asset to the team with his experience.

His form with the bat has come in for criticism recently, but the Wanderers could be just the place to set it right: he’s aggregated 242 runs from four innings at a staggering 80.67 at the venue, including a career-best 56-ball 119 against West Indies five years ago.

The X factor, however, could lie in the death-bowling skills of Andile Phehlukwayo and Tabraiz Shamsi, both of whom are currently in the top-10 of the T20I bowlers’ rankings.

As for Australia, Justin Langer recently said the team was “very close” to finding their best combination for the men’s T20 World Cup 2020 later this year. David Warner, in particular, will be looking forward to returning to the Wanderers, where he, in 2016, scored a 40-ball 77 and put on 161 runs with Glenn Maxwell – it was the highest stand for the fourth wicket in T20Is.

The presence of skipper Aaron Finch, third on the T20I Rankings adds further solidity at the top, and despite Maxwell missing out through injury this time, the likes of Mitchell Marsh, Matthew Wade and D’Arcy Short will have an opportunity to stake their claim for a middle-order spot.

Their bowling too has plenty of experience and variety, with seasoned campaigners in Mitchell Starc, Pat Cummins, and Kane Richardson, not to forget the wrist-spin of Adam Zampa, who will be coming in after a superb run in the Big Bash League 2019-20.

After winning the ODI series 2-1 in 2018, South Africa headed to Carrara, Queensland for a one-off T20I.

In a rain-curtailed encounter of 10 overs a side, De Kock (22), Reeza Hendricks (19) and Du Plessis (27) scored quick runs to help the visitors reach 108/6. Chris Morris, Lungi Ngidi and Andile Phehlukwayo then reduced Australia to 37/4 within four overs. Glenn Maxwell scored a breezy 23-ball 38 but didn’t have enough support as the hosts went down by 21 runs.

“Just walking into the hotel in Sandton, initially I was like, ‘the last time I left here it wasn’t pretty’. It wasn’t the best time of my life. But I’ve moved on from that and learned a lot.”

Rain is forecast on Friday evening, which might result in a shortened game. Wanderers has a reputation for being a batsman’s venue in limited-overs cricket, with a flat surface and short boundaries. As many as three successful run-chases of over 200 in T20Is have been registered at this venue, and another high-scoring affair can be expected on Sunday.