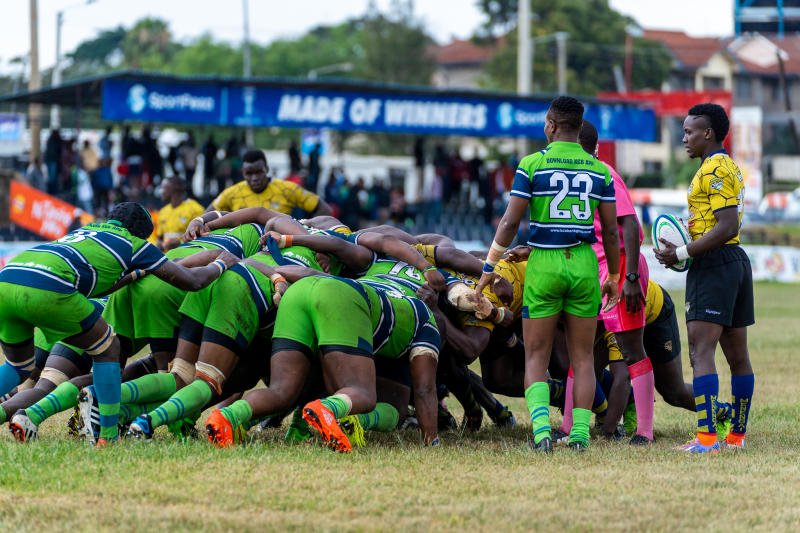 Kabras Sugar and KCB combined for a total of 119 points against their opponents as the top tier Kenya Cup league resumed over the weekend.

A 38-0 win away to Top Fry Nakuru, champions in 2012/13 and 2013/14 saw Kabras maintain their lead atop the standings with 45 points, one more than second-placed KCB who piled more misery on Blak Blad, defeating the Kenyatta University students 81-10 at the KCB Sports Club in Ruaraka.

A 32-22 home win for Homeboyz over visiting Resolution Impala Saracens saw the deejays maintain a third place on the log with 39 points, nine clear of the Saracens who stayed fourth on the log despite the defeat at Jamhuri Park.

Menengai Oilers, playing their second season in the big league overcame a 7-5 deficit to defeat visiting Stanbic Mwamba 30-14 at the Moi Showground in Nakuru, a result that saw them climb to fifth on the log with 29 points and well within the playoff slots.

Kenya Harlequin’s third win of the season, a 45-15 result at home to Kisumu at the RFUEA Ground moved the multiple Kenya Cup champions further away from the relegation zone, swapping places with Western Bulls who lost 41-10 at home to Nondescripts.

Blak Blad (eight points) and Kisumu (five points) were again winless this past weekend and are entrenched in the relegation zone with six rounds of regular-season action still left to play.

Strathmore Leos and Masinde Muliro University of Science and Technology (MMUST) maintained their push for home semifinal qualification as they both breached the 30 point barrier in fixtures against their opponents on Saturday.

Runaway leaders Strathmore Leos subjected visiting Egerton Wasps to a 36-7 defeat in Madaraka to make it 10 wins from 10 outings. They top the second tier KRU Championship log with 48 points, eight clear of MMUST who won on the road, defeating Mombasa 33-3 at the Mombasa Sports Club.

Third-placed Mean Machine took their points tally to 31 after stopping Eldoret 33-12 at the University of Nairobi while Northern Suburbs fairytale runs continued as the 25-16 win over the University of Eldoret Trojans returned them to fourth place on the log with 24 points.

The USIU Martials also stayed within the playoff berths with a 27-15 win away to the Catholic Monks, a result that sees them occupy fifth place on the log, level on 22 points with South Coast Pirates who were the beneficiaries of a 28-0 walkover following Kisii’s non-appearance.

Egerton Wasps and Eldoret dropped to seventh and eighth respectively, level on 18 points with the Catholic Monks sitting ninth on 17 points, two clear of tenth-placed University of Eldoret Trojans.