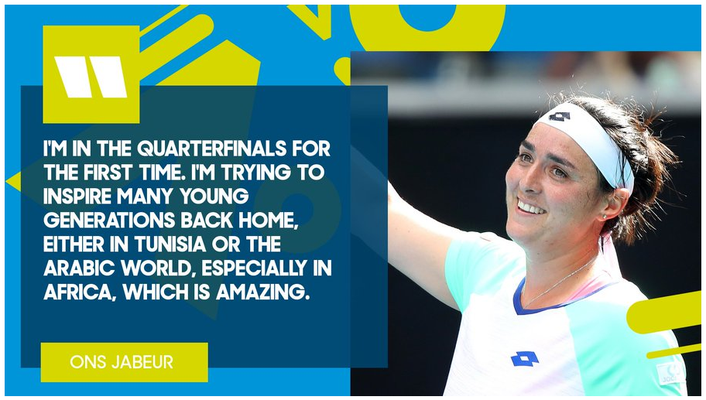 Unseeded Tunisian Ons Jabeur, Africa’s highest world-ranked women’s tennis player, ended a historic run at the Australian Open on Tuesday when she was defeated 6-4 6-4 by the No 14 seeded American Sofia Kenin in their quarterfinal clash at the Rod Laver Arena in Melbourne.

The 25-year-old Jabeur’s eventual undoing has her failure to convert the breakpoints on offer and there were seven in all – she managed to convert only one. There was also the matter of the 36 unforced errors against 16 from Kenin who went 4-1 up in the head-to-head count.

Her powerful groundstrokes and big serve (she won the ace count 5-0) were impressive throughout the match against the Russian-born Kenin (world-ranked 15th) but in an effort to impose herself on the game at crucial times, she made far too many errors.

Before match Jabeur, the first Arab woman to reach a Grand Slam quarterfinal was buoyed by a morale-boosting phone call from Tunisia’s president Kais Saied.

At the post-match presser, Jabeur told the media she realised that she needed to be far better prepared at the business end of a Grand Slam.

“I was a little tired and Kenin made me run on each ball,” said Jabeur. “She did not give a single free point.

“She didn’t make a lot of mistakes either. I guess that’s what a Grand Slam quarterfinal looks like. I wish I could have played better but I’m happy with my performances at the tournament.

“I still have a lot of work to do, but I hope to come back and do even better next time.”

Jabeur said this Melbourne experience was an eye-opener.

“I think I have proved that I was able to reach the quarterfinals of a Grand Slam, even if I still have a lot of things to improve, probably in terms of physical and mental.

“I proved to myself that I could do a lot of good things. I’m glad I played like that. Sometimes I’m hard on myself but I know I can do even better, especially when it gets tough and stressful. I think with more experience, I can handle the pressure better. “

“Even before reaching the quarters, I wanted to win a Grand Slam tournament. So now I think I’m even closer. I think I can believe more in my dreams.

“In my head, I’ve set very high goals. So, I’m ready, I’m going to go all out. It’s maybe a good start to the season to build my confidence and prepare for victories in big tournaments.”

Jabeur was blown away by the overwhelming support from Tunisia.

“My phone keeps ringing. I even spoke with the president of Tunisia. He called me to wish me luck. It was nice of him.

“I spoke to a lot of politicians from Tunisia who called me too. Everyone is crazy. A lot of people call me to wish me luck. I get lots of messages from people who tell me they’re proud of my performances.

“All I wish Tunisia to do is to get better and be a safer place. I love being Tunisian. I’m proud to be Tunisian.”