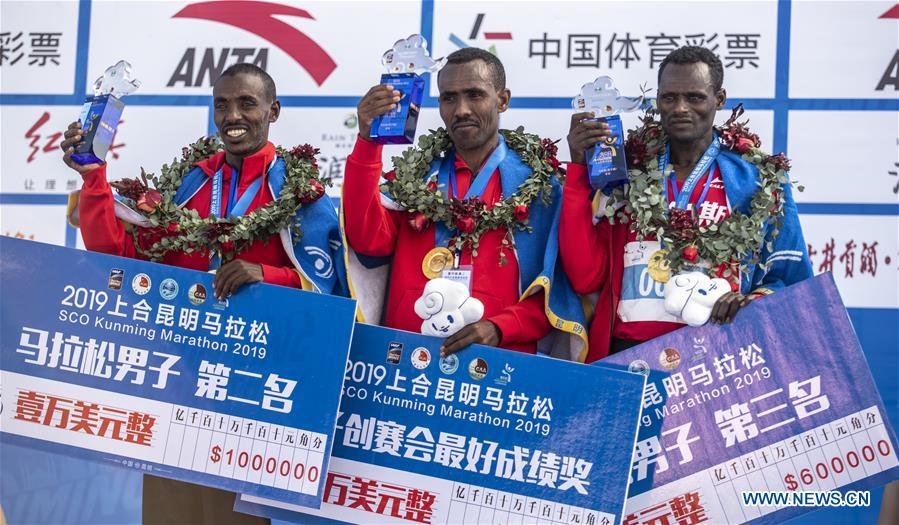 As the fastest entrant on paper with a personal best of 2:21:56, the 35-year-old Seboka lived up to expectations to take the women’s race under sunny and cool conditions in 2:32:54, breaking the previous course record of 2:33:53 set three years ago by Kenya’s Rodah Chepkorir.

Seboka led the race, together with compatriots Almaz Negede and Worke Degu Amena as well as Shelmith Nyawira of Kenya, to the 10-kilometre mark in 36:43 and 15km in 55:10.

The 2019 Gran Canaria Marathon winner Nyawira faded away after 17 kilometres while Seboka broke clear soon after the halfway point and enjoyed a comfortable lead until crossing the finish line.

It was the fourth marathon title for Seboka in China following her victory in Shenzhen last year and back-to-back titles in Dalian. She also finished third at the Beijing Marathon last month.

After a leading group of nine paced the race through the first 20 kilometres in 1:03:10, the 33-year-old Debele, whose PB of 2:07:48 was set six years ago in Dusseldorf, launched a powerful surge near the 23-kilometre mark to break away.

He kept widening the gap, leading by 43 seconds at the 30-kilometre water stations and extended it to 56 seconds by 35 kilometres.

Although Debele slowed in the closing stages of the race, no one could stop him from celebrating his first triumph over the classic distance in three years.

Fellow Ethiopian Tela Hagos Gebremeskel, who finished third in Kunming last year, upgraded to second place in 2:14:06. Urga Ararisa Negewo was another 38 seconds behind to complete a podium sweep for Ethiopia.