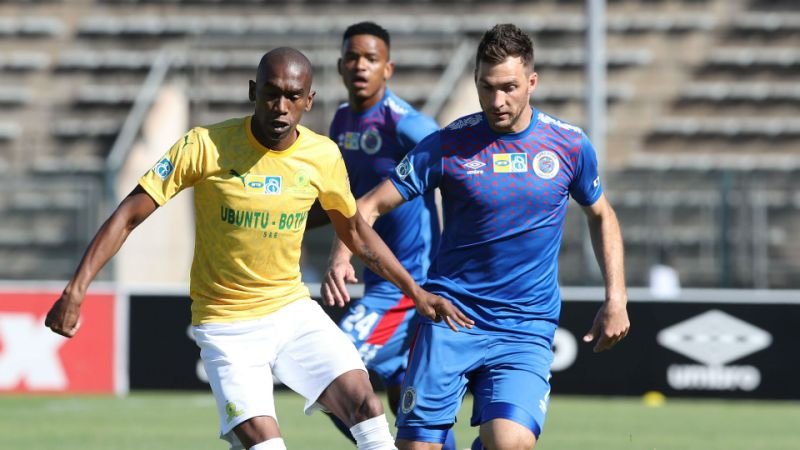 SuperSport United and Mamelodi Sundowns played to a 1-1 draw in a first-leg encounter of the MTN8 semifinals at the Lucas Moripe Stadium on Sunday afternoon.

Sundowns will be happier, though, as they take an away goal into the second-leg.

In a cracking start to the game, both sides created some really promising moments, but were unable to capitalise.

For SuperSport, Thamsanqa Gabuza directed a header wide of goal and Bradley Grobler shot inches wide of the target.

For Sundowns, Sibusiso Vilakazi had an attempt blocked by the defence and had another opportunity cleared off the goal-line.

The chances, though, kept coming in an exciting contest. Burgeoning young SuperSport midfielder Teboho Mokoena hit the side-net and Gabuza, with yet another opportunity, could only head straight at Sundowns goalkeeper Denis Onyango.

Lebogang Maboe went close for Sundowns, while his captain, Hlompho Kekana, who has been in superb form this season, powered a free-kick over the bar.

With so many scoring chances, it was only a matter of time before a goal was scored. And it came five minutes before halftime, and again it was the physical presence of Gabuza which allowed him to head the ball into the net and give SuperSport a 1-0 lead.

The lead, though, didn’t last long as, a minute later, it was all-square at 1-1 when Sundowns’ Uruguayan striker Gaston Sirino equalised.

It was no different in the second half as both teams continued to throw the kitchen sink at each other.

Clayton Daniels had an inviting opportunity for SuperSport but sent his header wide of goal. At the other end, Tebego Langerman could have scored for Sundowns but was denied by a brilliant save from SuperSport goalkeeper Ronwen Williams.

A few more chances accrued to Sundowns, with both Kekana, Vilakazi and Themba Zwane all firing their attempts at goal over the bar.

Sundowns piled on the pressure and Mosa Lebusa had an effort cleared off the line and Zwane was foiled by another fine stop from Williams.

With SuperSport trying to bring more calm and assurance to their midfield, they made a change, with Jamie Webber replacing Mokoena.

Evans Rusike could then have snatched the game for SuperSport but scuffed his shot wide.

Sundowns also looked to their bench, with Vilakazi coming off to be replaced by Sphelele Mkhulise.

With neither team able to find a winner, they take the 1-1 result into the second leg of the semifinals, which will be played at the same venue on September 18.