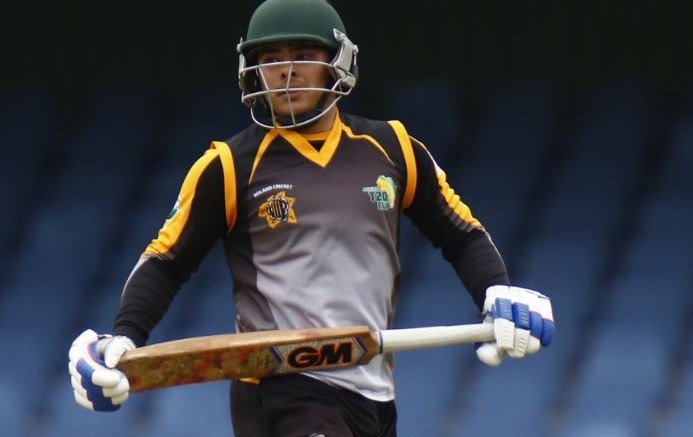 Half-centuries by Vezokuhle Mntungwa and David Rushmere ensured that the University of Stellenbosch (Maties) were the only unbeaten team after Day 3 on Wednesday at the Varsity Cup Cricket Week in Potchefstroom.

The Cape team made it four wins from four to top the table following an emphatic seven-wicket triumph over Nelson Mandela University (Madibaz) at Senwes Park.

The log-leaders, though, were again in fine form, following up their wins over Tuks, University of Cape Town (UCT) and UWC with another solid showing to continue their dominance of the week.

They won the toss and bowled in the latest game, but it was not as easy as they might have expected with Madibaz amassing 166/6 in their 20 overs – Joshua van Heerden top-scoring with a fine unbeaten 85 off 61 balls (7 fours, 1 six).

Ben Ward, the leading wicket-taker in the competition, was the pick of the bowlers with 3/27.

The score proved no match for the formidable Maties batting line-up as Mntungwa dropped anchor with 56 off 53 balls (2 fours, 1 six) and Rushmere cut loose with 63 off 34 balls (5 fours, 2 sixes).

The pair shared in a 127-run fourth-wicket stand that helped their side storm to victory with nine deliveries remaining.

Tuks, meanwhile, are second on the table after winning their high-profile clash against UJ in which star trio Jiveshan Pillay, Donovan Ferreira and Neil Brand all played key roles.

The Tshwane side, whose only loss of the week came against Maties in their first game, batted first at NWU Puk Oval where they totalled 197/1.

The Johannesburg side did manage to win their earlier game, though, edging past Madibaz by 13 runs in a match that saw 167/5 outdo 159/5.

UCT lost both of their games on Wednesday – results that left them propping up the table in the North West.

In their morning game, they went down by 27 runs to CUT, who posted 155/3 thanks to Hanco Olivier’s unbeaten 62 (52 balls, 4 fours) and then restricted their opposition to 128 all out.

Olivier was also the star in the field with 3/15 that brilliantly supported Hannes Venter’s 4/21.

UCT had the perfect chance of redemption in a derby with UWC, but they were again on the wrong end of the result after Mihlali Mpongwana’s unbeaten 40 took the latter side to a three-wicket win with four balls to spare.