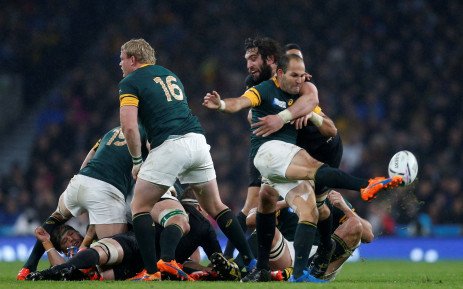 After Springboks lost their opening RWC 2019 match, they will be looking to regain their momentum in Saturday’s match against Namibia in the City of Toyota Stadium, Japan.

There will be first RWC 2019 appearances in the competition for nine players, while Makazole Mapimpi (leftwing) and Lukhanyo Am (centre) are the only players from the 23-13 reverse against New Zealand, to make back-to-back starts.

Also, six of the opening day starting XV re-appear on the bench – including captain Siya Kolisi – while all of last Saturday’s replacements (except for injured Jesse Kriel) are in the starting lineup.

The starting XV features nine of those who started the opening match of the international season; a 35-17 victory over Australia in the Castle Lager Rugby Championship in July.

One of the newcomers to the starting line-up is Schalk Brits, who moves to a new role in the back row at No 8. Brits captains the team for the second time having led the Springboks in the 24-18 victory over Argentina in Pretoria.

Frans Steyn, Francois Louw and Tendai Mtawarira all make second appearances against Namibia – having played in the Rugby World Cup meeting eight years ago – to provide a spine of experience to a team which has another five players yet to reach double figures in caps (Warrick Gelant, Sbu Nkosi, Makazole Mapimpi, Herschel Jantjies and Kwagga Smith).

Brits would cover the replacement hooker position and Franco Mostert (lock) would cover the loose forward positions along with Siya Kolisi, who continues his rehabilitation with more planned game time from the bench.

Thomas du Toit, who only arrived in Nagoya on Tuesday as an injury replacement for Trevor Nyakane, goes straight into the matchday 23 as a front-row replacement.

All Blacks regain World No 1 slot after defeating Springboks
Boland and Griquas to battle for Iqhawe Rugby Week crown
Latest Sports News Africa | Latest Sports Results
Get our web app. It won't take up space on your phone.
Install
See this post in...