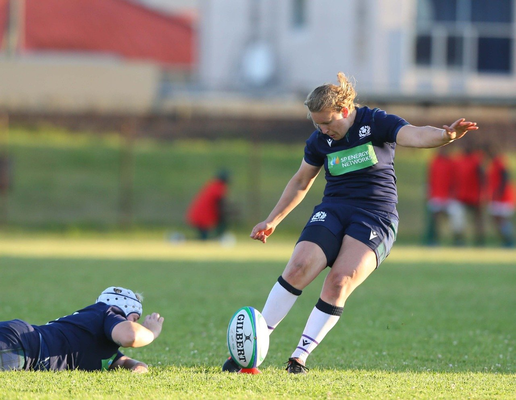 Scoring four tries in each half, the touring Scotland Women romped to an emphatic 47-5 win over South Africa in the first of two Tests at City Park, Athlone, on Monday afternoon.
The rout started as early as the sixth minute when Scotland fullback Chloe Rollie ran in the first of her two first-half tries.
Two minutes later the SA defence leaked a second try and this time leftwing Rhona Lloyd crossed the whitewash.
The Scots capitalized on a ninth minute SA yellow card and Lloyd snatched a second try. Flyhalf Sarah Law managed one conversion in windy conditions to wrap the fist-half scoring.
South Africa finished the half strongly but were unable to make their pressure count after they were held up twice in the in-goal area.
Just moments after USA ref Amelia Luciano started second-half play, rightwing Lisa Thomson ran in Scotland’s fifth try after probing the defence out wide with a strong run (27-0).
In the 46th minute, South Africa finally opened their scoring account with an unconverted try by the Eastern Province No 8 Aseza Hele (27-5).
Over the rest of the half, the Scots imposed themselves on the match and in a 25-minute passage of play added 20 more points through tries by inside centre Helen Nelson and substitute Abi Evans (2). Law added a penalty and a conversion (47-5).
Scorers: South Africa 5 (0): Try: Aseza Hele
Scotland 47 (22): Tries: Chloe Rollie (2), Rhona Lloyd (2), Lisa Thomson, Helen Nelson, Abi Evans (2). Conversions: Sarah Law (2), Penalty: Law