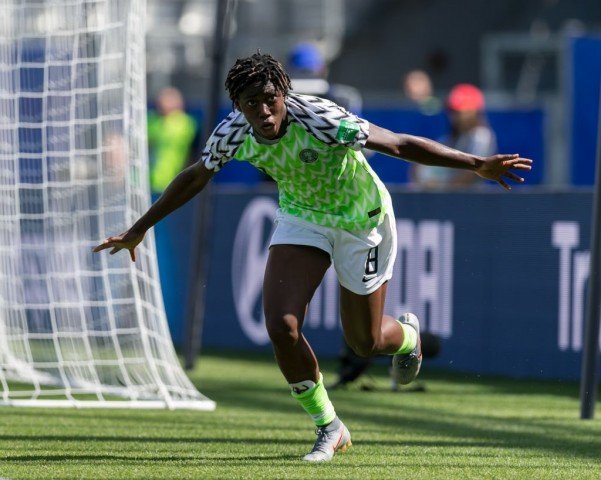 Spain-based forward Asisat Oshoala scored the only goal as Nigeria Women beat Algeria on Tuesday to progress 3-0 on aggregate to the third qualifying round of the Tokyo 2020 Olympic Games.

The West Africans are seeking a fourth qualification for the quadrennial multi-sport event after debuting at Sydney 2000 and further appearances at Athens 2004 and Beijing 2008.

On Tuesday, Nigeria completed a double over their North African rivals to remain in contention.

At the Agege Stadium in Lagos, it was not as easy as the Super Falcons expected as the visitors looked well prepared for the task by covering every blade of grass, and they managed to keep a clean sheet in the first half.

The Algerians seized the initiative at the re-start but were unable to make the most of their opportunities.

Nigeria then got the only goal when captain Oshoala latched on to a pass from Francisca Ordega and went on a solo run before burying the ball beyond Algeria goalkeeper Kahina Takenint in the 57th minute.

With the victory, the nine-time African champions now have a date with the Ivory Coast in the next round of the elimination series in the race towards Tokyo 2020.

The Ivorians knocked out Mali with an identical 3-0 aggregate scoreline.