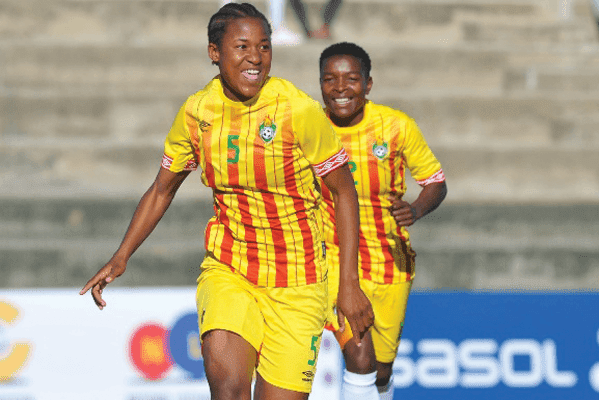 Zimbabwe set up a semifinal date with South Africa at the 2019 Cosafa Women’s Championship on Thursday after outplaying Eswatini 7-0 at the Wolfson Stadium in Port Elizabeth on Monday.

Zimbabwe finished top of Group C and will meet the Banyana Banyana in what should be a hard-fought clash between two most powerful sides in the region.

Emmaculate Msipa scored four goals for Zimbabwe as they cruised to the win, while Mavis Chirandu bagged a brace and Rudo Neshamba scored the other.

South Africa sealed top spot in Group A as they beat Madagascar 3-0 to claim a full haul of nine points.

On a day when midfielder Mamello Makhabane celebrated her 100th cap, strikes from Ode Fulutudilu and Refoloe Jane, and an own-goal from Madagascar defender Lalaina Razafimanantsoa, sealed the win for the host team.

Meanwhile, Malawi kept alive their hopes of a semifinal place as the best runner-up when they thumped Comoros Islands 13-0.

Linda Kasenda scored eight goals for Malawi to shoot to joint-top of the scorers’ charts, with Asimenye Simwaka (two), Sabinah Thom and Zainabu Kapanda also on target for Malawi.

They must now wait for the outcome of Group B, which will conclude on Tuesday.

Zambia and Botswana, who both have six points, meet at the Wolfson Stadium and a draw would see both teams advance – Botswana as the best-placed runner-up.

However, a win for Zambia or Botswana would see the Malawians go through based on their superior goal difference.

The other match in the pool sees Namibia take on Mauritius at the Gelvandale Stadium at the same time.

South Africa had already sealed their place in the semifinals before their final match against Madagascar.

South Africa were actually behind to Madagascar on Monday but were soon level when Oratile Mokwena netted and then hit the front as Shakeerah Jacobs scored her third goal of the competition in the second half.

The points were made safe late on as Zethembiso Vilakazi added a third goal.