Black Leopards beat Maritzburg for first win of the season 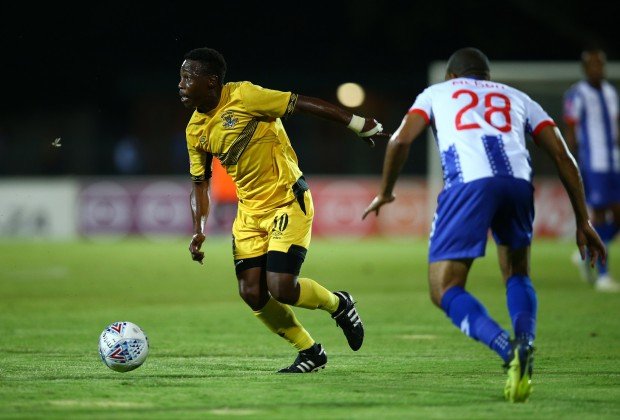 Black Leopards emerged 1-0 winners in a hard-fought league encounter against Maritzburg United at the Harry Gwala Stadium on Wednesday night.

Lesedi Kapinga’s 40th-minute strike proved the difference, with the home side squandering a chance for an equaliser towards the end of the game after Judas Moseamedi’s penalty kick was saved by Leopards keeper Jonas Mendes.

After a quiet start to the match from both sides, Maritzburg began to find their rhythm around the quarter-hour mark, with the first chance arriving in the 21st minute when Moseamedi created space in the box for a shot but was denied by Mendes.

More opportunities followed for the KwaZulu-Natal outfit, but the scoreline remained unchanged as Dan Morgan curled an effort marginally wide before Siyanda Xulu’s half-volley was kept out by Mendes.

With the home team having failed to capitalise on their chances, Leopards pounced five minutes before the interval when Kapinga picked out the bottom corner of the net to beat Richard Ofori.

After the break, the game was to become a tightly-contested affair with neither side looking likely to score.

That changed in the 77th minute when Maritzburg were awarded a penalty for a hand-ball in the box. But the opportunity to restore parity came and went as Moseamedi’s spot-kick was saved by Mendes.

Lidoda Duvha were able to play out the final minutes without any major issues as they claimed their first win of the season to move up to four points.

Maritzburg, meanwhile, have claimed just two points from their first four matches and are still searching for their first victory.