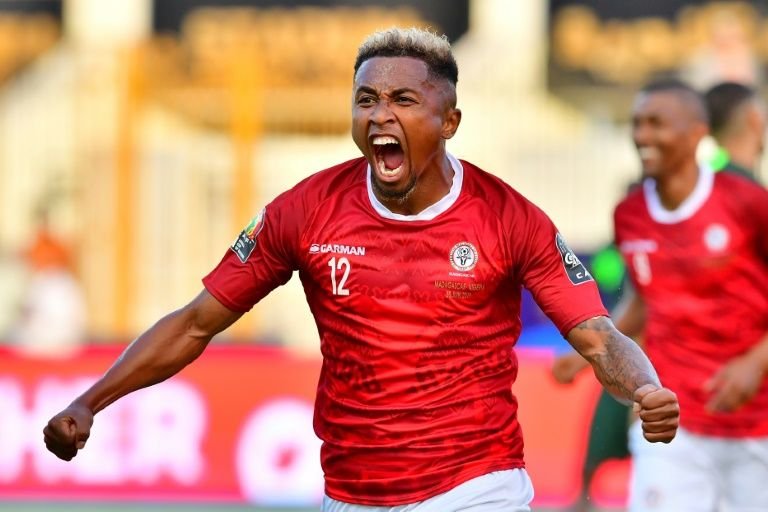 Madagascar shocked pre-tournament favourites Nigeria 2-0 in their Africa Cup of Nations Group B match at Alexandria Stadium on Sunday.

An error from centre back Leon Balogun and a sumptuous freekick from Carolus Andriamahitsinoro saw debutants Madagascar finish top of their group.

The Islanders remained unbeaten in the group stage matches to finish on seven points. They will meet one of the four best-placed number three teams in the last-16.

With the defeat, Nigeria finish second and will meet the second-placed team from Group F in Alexandria next weekend.

Madagascar went to the break a goal up. They had been more patient in the build-up, stuck to their shape and when they had an opportunity, broke on the counter.

In a slow start to the game, Nigeria had the first sniff at goal in the eighth minute when Ahmed Musa’s freekick from the edge of the box after Odion Ighalo was fouled going over.

They were handed a gift on a golden platter by Balogun who fumbled with a pass before Lalaina Nomenjanahary pounced and rounded keeper Ikechukwu Ezenwa, to break the deadlock after just 12 minutes.

Six minutes later, Nigeria came close when Kalu picked the ball up on the right before making an attempt with a curling effort with his left boot that went just wide.

On the half-hour mark, Romain Metanire made a superb tackle to poke the ball off Musa’s feet as he prepared to tap into an empty net after the winger had picked up a cross inside the box before rounding the keeper.

Nigeria started the second half with Rohr making a switch, Ogu coming off for Wilfred Ndidi who had been rested.

But, Madagascar were not about to have their backs against the wall and eight minutes into the second half, when Andriamahitsinoro stood behind a freekick, the result was sealed. He curled the ball beautifully and it deflected off the end of the wall before dipping past Ezenwa.

Nigeria sought to give an immediate reply and Ndidi came close with a shot on the half-turn that went straight into the keeper’s arms.

In the 65th minute, Etebo had a chance with a freekick, but he hit it slightly over the crossbar.

DR Congo on fire against Zimbabwe, run out 4-0 winners
Egypt close out group assignments undefeated after seeing off Uganda 2-0