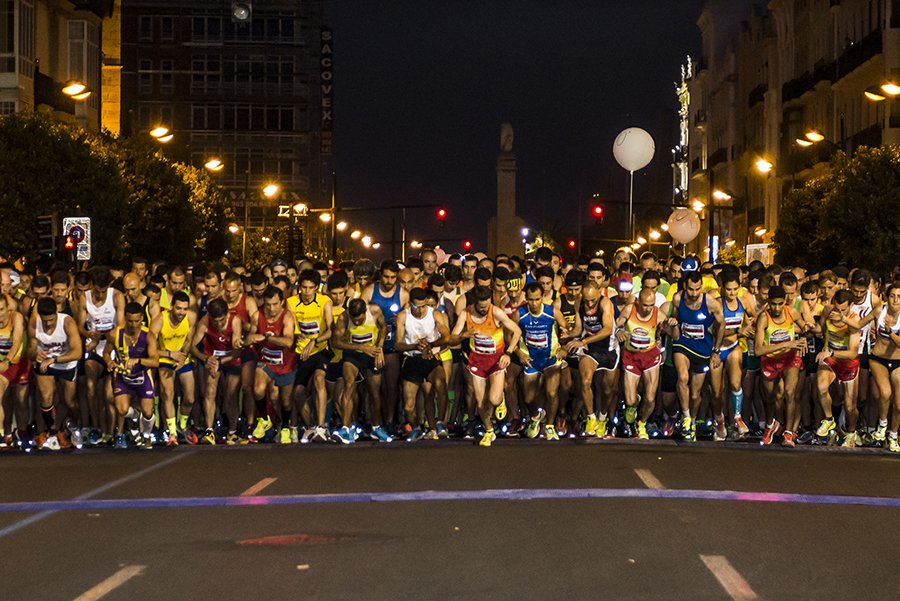 The men’s race began at a steady 2:47-per-kilometre pace and the large 10-man pack went through the opening 5km in 13:54, well on schedule to finish inside the target 42 minutes. All the main favourites were in the lead pack, led by Kipchumba and fellow Kenyan Henry Ronoh.

That kind of rhythm proved too strong for everyone except for Kipchumba, who maintained his speed to reach the 10km checkpoint in 27:43 with an eight-second advantage over compatriot Alfred Barkach and 22 seconds ahead of Ronoh, whose last appearance had been another 15km event in 43:26 last month.

Over the closing kilometres – and despite being a night event which finished shortly before midnight – Kipchumba managed to keep a brisk pace and romp home in a course record of 41:55. In a Kenyan podium sweep, Kipchumba finished 33 seconds ahead of Barkach and 1:04 over Rono, all of them recording PBs at the rarely held distance.

Kipchumba holds a fine 59:29 clocking over the half marathon precisely set in Valencia last November; he commented: “I already knew the city of Valencia and I love it,” said Kipchumba, who clocked his half-marathon PB of 59:29 in the Spanish city. “Both the circuits (half marathon and 15km) are pretty fast and ideal to set personal times, I hope to come back here many times.”

Ethiopia’s Zeineba Yimer and Kenya’s Dorcas Jepchumba Kimeli, both paced by Morocco’s Hassane Ahouchar, were the early leaders in the women’s race, which was held alongside the men’s event.

The opening and slightly uphill first 5km of 15:26 suggested that the top contenders could challenge the Spanish 15km all-comers’ record of 46:14 set by Florence Kiplagat en route to breaking the then world half marathon record in Barcelona four years ago.

However, the speed decreased in the following kilometres as the leaders covered the second 5km in 15:52, bringing them to 10km in 31:18. By then, the third-placed runner, Jebesa Zenebu Fikadu of Ethiopia, was some way behind the leaders with 32:45.

The key move came shortly after the 12th kilometre when – still paced by Ahouchar – Yimer managed to break away from a tiring Kimeli and then upped her pace over the closing stages to finish inside 47 minutes with a course record of 46:52. Kimeli followed 40 seconds later while Fikadu secured the third spot in 49:15.

The 20-year-old victor is one of the 20 quickest ever women over the half marathon courtesy of her 1:05:46 career best set in Ras Al Khaimah last February to take third.

Emeterio Valiente for the IAAF